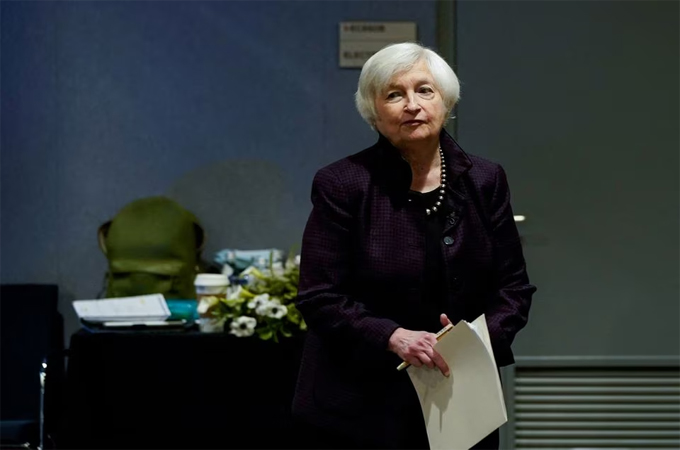 Western countries are working to structure price caps on Russian refined petroleum products to ensure continued flow of Russian diesel, but the markets are complicated and there is a chance things do not go to plan, US Treasury Secretary Janet Yellen said.
The Group of Seven countries and Australia implemented a price cap on Russian oil December 5, banning the use of Western-supplied maritime insurance, finance and other services for cargoes priced above $60 per barrel.
They are now finalising two separate price caps on Russian refined petroleum products, such as diesel and fuel oil that are due to take effect on Feb. 5 along with a European Union ban on diesel imports, Yellen told reporters in Dakar, Senegal.
One will cover high-value products typically sold at a premium to crude, while another will apply to low-value products like fuel oil, she said told reporters traveling with her in Africa.
Yellen said setting the new price caps had proven "more complicated" than for crude, given the range of different refined products and price structures, and the importance of ensuring continued supplies of Russian diesel to the market.
"It's more complicated, but we've been working hard to figure out how to achieve the same objectives," as with the broader cap on Russian crude, she said.
"You know, there's always the potential that things may not go according to plan but we've studied these markets very carefully and we believe that we're going to come out with a set of caps that will achieve the same things that we've achieved with crude so far," she said, adding that adjustments could still be made over time.
While the first oil price cap only took effect on December 5, it had proven successful thus far, Yellen said, citing a drop in the price that Russia was getting for crude oil.
"They've expressed concern about revenues, and we've seen no sign that Russia is withholding oil from the market," she said. -Reuters
Share