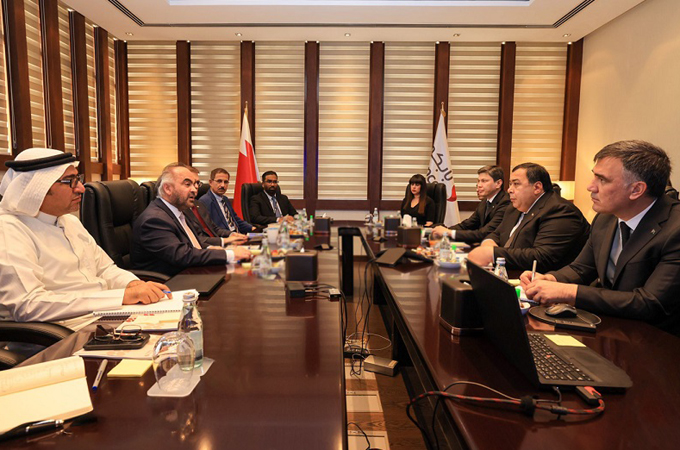 Potential collaboration and opportunities to strengthen economic and investment activity between Bahrain and Turkmenistan, especially in the energy and petrochemical areas, were discussed during a high-level meeting of officials.
Senior executives from the Bahrain Petroleum Company (Bapco), Gulf Petrochemical Industries Co (GPIC), and Tatweer Petroleum, which form part of the Oil and Gas Holding Company (nogaholding) Group, received a high-level delegation from the Republic of Turkmenistan at the Bapco headquarters.
The meeting came as part of the delegation’s official visit to Bahrain, said a statement.
The Turkmen delegation comprised the Deputy Minister of Foreign Affairs, the President of the State Bank for Foreign Economic Affairs of Turkmenistan, the Vice President of Turkmengaz State Concern, the Vice President of Turkmen state-owned company (Turkmenhimiya), a member of the Board of Directors of the Pipeline Company and the Head of the Middle East and Africa Department at the Turkmenistan Foreign Affairs Ministry.
The delegation was welcomed by senior executives from nogaholding’s operating companies who praised the bilateral relations between the two countries following His Majesty King Hamad bin Isa Al Khalifa’s historic visit to Turkmenistan.
The senior executives from nogaholding Group stressed the eagerness of Bahrain’s energy industry to expand their business operations across borders through strategic investments and economic partnerships, in accordance with the vision of Shaikh Nasser bin Hamad Al Khalifa, Representative of His Majesty the King for Humanitarian Works and Youth Affairs, and Chairman of nogaholding.
The nogaholding Group representatives expressed their desire to further develop mutually-beneficial partnerships with the Turkmen companies.
The Turkmen delegation commended the significant development witnessed by the Kingdom’s energy sector and confirmed its readiness to execute joint projects, and foster business partnerships in Turkmenistan as a result of the country’s ample industrial resources and investment-friendly facilities.
The Turkmen delegation also applauded the transformation of the Kingdom’s energy industry, citing Bapco’s Refinery Expansion project - the Bapco Modernization Programme (BMP), and praised the high level of professionalism and efficiency demonstrated by the local talent who manage the construction of the advanced industrial facilities.
The delegation also met with GPIC CEO Eng Yasser Abdul Rahim Al Abbasi and other members of the executive management team, where they discussed investment opportunities in Turkmenistan, focusing specifically on two prospective projects - the establishment of a methanol plant and an ammonia and urea plant.
Both parties concluded the meeting by agreeing to conduct further visits and continue to capitalise on the shared knowledge and experiences to strengthen bilateral collaboration, said the statement. -TradeArabia News Service
Share