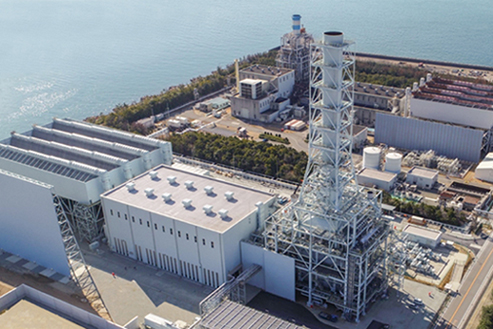 The T-Point 2 plant was commissioned in March at Takasago Works in Hyogo Prefecture, Japan, to replace MHPS’ original T-Point plant and to continue MHPS’ approach — which is unlike any other manufacturer’s — to advance the limits of technology while minimizing risk to its customers.

To do this, MHPS validates its new gas turbine technologies and digital solutions under long-term grid-connected operation for a minimum of 8,000 operating hours, which is equivalent to nearly one year of normal operation and is a key insurance industry criterion for fleet reliability.

MHPS’ most advanced JAC gas turbine, designed for maximum efficiency and lower emissions, is now integrated with MHPS-Tomoni digital solutions for verification and validation at T-Point 2.

The gas turbine is entering commercial operation at record-setting combined cycle efficiency greater than 64 per cent and a world’s first turbine inlet temperature of 1,650 deg C.

The digital building blocks of the autonomous power plant being validated at T-Point 2 include an advanced Automatic Plant Startup package that is closely linked to the advanced analytics and diagnostics that continuously monitor the total plant.

To validate complete remote operation, operations will be transferred from the local control room to the Takasago Remote Monitoring Center. Operations and maintenance building blocks under evaluation include an advanced array of acoustic, video, and thermographic data acquisition sensors monitored by advanced analytics that are being trained to identify pattern changes.

“Unlike other manufacturers, MHPS demonstrates new gas turbine capabilities at our own combined cycle power plant before shipping to our customers. This enables us to provide unmatched performance, such as the 99.5 per cent reliability of our J-Series gas turbines,” said Paul Browning, President and CEO of MHPS Americas and Chief Regional Officer for Europe, the Middle East, Africa and the Americas.

“I congratulate our dedicated team of Engineers, Procurement, and Construction personnel for achieving commercial operation on schedule, on budget, and exceeding output and efficiency expectations. This project positions us years ahead of any manufacturer in putting the latest generation of 1,650 deg C gas turbine technology into commercial operation. We are leading a Change in Power.”

MHPS, headquartered in Yokohama, Japan, is a joint venture formed in February 2014 by Mitsubishi Heavy Industries and Hitachi integrating their operations in thermal power generation systems and other related businesses.

MHPS recently announced that its name will soon change to Mitsubishi Power.

MHPS ranks among the world’s leading suppliers of equipment and services to the power generation market, backed by 100 billion yen in capital and approximately 20,000 employees worldwide.