A dual ball DBB can create a quick barrier with a 90-degree turn, which is a time saving option. It also gives a reliable shut-off in critical applications, says a company spokesman in this technical paper. 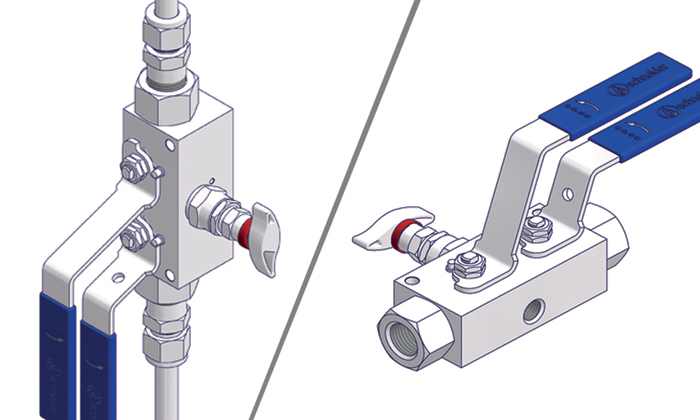 Instrument DBB ball valves are suitable up to 6,000 PSI as standard

Twenty years ago AS-Schneider created its double block and bleed (DBB) value series. Since then the company has reported many improvements in the system.

Its latest innovative design of the DBB is specific for instrument piping and based the design on the standard Shell MESC SPE 77/165 and EEMUA 182.

As the name implies, these valves are mounted to the pipework, then, at least, the first block valve coming from the process must have a robust process design.

Process and instrument valves have different requirements, depending on function, medium, and pressure-volume-product. The potential hazard of pressure equipment is a function of these parameters.

"Users continue to report a first-rate experience with our VariAS-Blocks. Thus, we developed a DBB ball valve for instrument piping. The main goal was to have a cost-effective solution," says a company spokesman.

He adds: "This goal was workable due to lower requirements for instrumentation. There’s also no need for an integral robust primary isolation valve. The result was our BA Series DBB ball valve, which has a very compact design. It’s lighter and takes up less space. It also boasts high-quality components for reliability and safety."

DBB valve systems are standard installations, and the oil and gas industry makes heavy use of them. These can even be found on offshore platforms.

The DBB system is connected using three singles and a bleed valve between two isolation valves. It’s recommended to use the BA Series instead, as one single in this series incorporates the three valves in one body.

One of the advantages of a DBB system is it reduces costs without compromising safety. The savings are most evident for exotic materials like Alloy 625 or similar.

The BA Series DBB also has fewer potential leak paths. It also weighs less, which is a boon for ships and offshore applications. Additionally,0 it’s easier to install, and it’s space-saving.

AS-Schneider’s instrument DBB valves are suitable as standard for up to 6,000 PSI (414 bar). They are also available in a high-pressure version of up to 10,000 PSI (689 bar). All AS-Schneider valves feature an anti-blowout system.

A ball valve controls the flow of a gas or liquid. It uses a rotary ball with a bore. This type may have two, three, or even four ports. Most manufacturers use three designs for the valve body: one-, two-, or three-piece. In the floating-ball, the most common configuration, the design suspends the ball in the media and holds it in place with two seating rings. The hole through the ball sometimes has different settings. For example, they are available in full, reduced, or V-shaped bore.

The term DBB causes much confusion. It is especially perplexing when it’s used to define valve functionality. Two credible sources define the term in different ways. Thus, it has been an ongoing debate in the oil and gas industry.

On the other hand, OSHA requires DBB to be two individual valves in one unit.

AS-Schneider designs its valves according to OSHA’s definition. It incorporates three independent operating valves in a single body, consisting of two isolation/block and one bleed, with both isolation/block valves sealing in one direction.

Why do users specify a DBB? Because they want a compact system that delivers more consistent isolation. Such isolation is necessary for dangerous areas. It gives more protection than a standard single valve would.

A dual ball DBB is a quarter-turn valve. It can create a quick barrier with a 90-degree turn, which is a timesaving option. It also gives a reliable shut off in critical applications.

A family-run company, AS-Schneider, was founded in 1875 and with over 350 employees, is one of the leading manufacturers of instrumentation valves, manifolds and DBB valves worldwide.

In the market segment for large-bore diesel engine valves such as those used in marine propulsion and the generation of electricity, AS-Schneider is the world market leader.

The company has subsidiaries in Romania, Singapore, Dubai (UAE) and Houston (US) and professional partners in more than 20 countries worldwide. --Tradearabia News Service