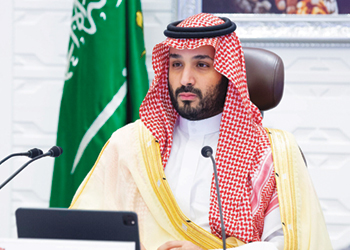 He said, as a leading global oil producer, the kingdom fully recognises its share of responsibility in advancing the fight against the climate crisis. "Just as the kingdom underpinned energy markets during the oil and gas era, it is going to become a global leader in forging a greener world."

The Saudi Green Initiative will work to reduce carbon emissions by more than 4 per cent of global contributions, through an ambitious renewable energy programme that will generate 50 per cent of the kingdom’s energy from renewables by 2030, and several other projects in the fields of clean hydrocarbon technologies, estimated to eliminate more than 130 MT of carbon emissions, alongside raising the rate of waste diversion from landfills to reach 94 per cent in the kingdom.

The most notable part of the initiative is the planting of 10 billion trees in the kingdom, the equivalent to rehabilitating 40 million hectares of degraded lands, translating to a 12-fold increase from current tree covers.

Meanwhile, under the Middle East Green Initiative, 40 billion trees will be planted in the Middle East in coordination with regional countries in what is seen as the largest reforestation programme in the world. This project will restore an area equivalent to 200 million hectares of degraded land, representing 5 per cent of the global target of planting 1 trillion trees and reducing 2.5 per cent of global carbon levels.

The Crown Prince’s green call has been praised by several regional leaders and organisations, including those from the UAE, Bahrain, Kuwait, Qatar, Djibouti, Jordan, Pakistan, Sudan, Iraq, and Eritrea; and the Organization of Arab Petroleum Exporting Countries (OAPEC), Arab Parliament, Organization of Islamic Cooperation (OIC), Gulf Cooperation Council (GCC) for Arab States, and the Arab League.