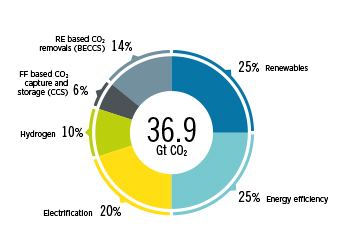 Renewable energy continued to expand steadily and well above the long-term trend, with share in total capacity expansion reaching new record of 81 per cent last year, says a report by Irena

New data released by the International Renewable Energy Agency (Irena) shows that renewable energy continued to grow and gain momentum despite global uncertainties. Over the past decade, renewables capacity increased by 130 per cent, while non-renewables only grew by 24 per cent

By the end of 2021, global renewable generation capacity amounted to 3,064 Gigawatt (GW), generating around an estimated 8,000 terawatt-hours (TWh) of electricity and increasing the stock of renewable power by 9.1 per cent, Irena’s Renewable Capacity Statistics 2022 shows.

Among renewable technologies, solar PV installations have seen the fasted growth. By the end of 2021, the cumulative installed capacity of solar PV reached 843 GW globally; 133 GW of capacity was commissioned in 2021 alone, with 57 per cent of the installations in Asia.

Other renewable power technologies such as bioenergy, geothermal, solar thermal and ocean power also grew rapidly during the past decade, albeit from a small base. The combined installed capacity of these renewables reached 166 GW in 2021, 86 per cent of which was bioenergy power.

China was the biggest contributor, adding 121 GW to the continent’s new capacity. Europe and North America—led by the US—took second and third places respectively, with the former adding 39 GW, and the latter 38 GW.

Renewable energy capacity grew by 3.9 per cent in Africa and 3.3 per cent in Central America and the Caribbean.

'This continued progress is another testament of renewable energy’s resilience. Its strong performance last year represents more opportunities for countries to reap renewables’ multiple socio-economic benefits. However, despite the encouraging global trend, our new World Energy Transitions Outlook shows that the energy transition is far from being fast or widespread enough to avert the dire consequences of climate change,' says Irena Director-General, Francesco La Camera.

'Our current energy crisis also adds to the evidence that the world can no longer rely on fossil fuels to meet its energy demand. Money directed to fossil fuel power plants yields unrewarding results, both for the survival of a nation and the planet. Renewable power should become the norm across the globe. We must mobilise the political will to accelerate the 1.5°C pathway.'

To meet the 1.5°C Scenario, installed capacity will have to more than triple by 2030 which will require annual capacity additions to ramp up significantly.

A portfolio of projects in generation and grid infrastructure will have to be set up in this decade to begin a pipeline for contracts over the ensuing decades to 2050.

What is needed is an annual average of at least 800 GW of new renewable capacity additions each year through 2030, up from around 264 GW added in 2020.

Coal-fired generation will drop sharply over the decade, its share in total electricity generation falling from 37 per cent in 2019 to 11 per cent in 2030, before being phased out entirely by 2050.

Events of recent years have accentuated the cost to the global economy of a centralised energy system highly dependent on fossil fuels. Oil and gas prices are soaring to new highs, with the crisis in Ukraine bringing new levels of concern and uncertainty.

The Covid-19 pandemic continues to hamper recovery efforts, while citizens worldwide worry about the affordability of their energy bills. At the same time, the impacts of human caused climate change are increasingly evident around the globe.

The Intergovernmental Panel on Climate Change (IPCC) warns that between 3.3 and 3.6 billion people already live in settings highly vulnerable to climate change.

In 2021, Irena stressed the importance of a wide-ranging shift in the current trajectory across all energy uses. While some progress has been made, it falls woefully short of what is required.

The stimulus and recovery efforts associated with the pandemic have also proved a missed opportunity, with only 6 per cent of the G20’s $15 trillion in recovery funding in 2020 and 2021 being channeled towards clean energy.

The acceleration of the energy transition is also essential for long-term energy security, price stability and national resilience.

Some 80 per cent of the global population lives in countries that are net energy importers. With the abundance of renewable potential yet to be harnessed, this percentage can be dramatically reduced.

Such a profound shift would make countries less dependent on energy imports through diversified supply options and help decouple economies from wide swings in the prices of fossil fuels. This path would also create jobs, reduce poverty, and advance the cause of an inclusive and climate-safe global economy.

Irena’s 1.5 deg C pathway positions electrification and efficiency as key drivers of the energy transition, enabled by renewables, hydrogen, and sustainable biomass. This pathway, which requires a massive change in how societies produce and consume energy, would result in a cut of nearly 37 gigatonnes of annual CO2 emissions by 2050.

These reductions can be achieved through:

• Significant increases in generation and direct uses of renewables-based electricity.

• Clean hydrogen and its derivatives.

• Last-mile use of carbon capture and storage (Figure ES.1).

The idea that fossil gas alone will be required to integrate higher shares of variable solar and wind is being fast overtaken by the improved economics of alternative sources of flexibility. But in addition to many technological solutions, markets will need to be adapted, both in liberalised and regulated systems.

Phasing out fossil fuels assets should be done in tandem with measures to eliminate market distortions and incentivise energy transition solutions.

This will involve phasing out fossil fuel subsidies and ensuring that the full costs (environmental, health and social) of burning fossil fuels are reflected in their prices, thereby eliminating existing market distortions.

Fiscal policies, including carbon pricing, should be implemented and adjusted to enhance the competitiveness of transition related solutions.

Such interventions should be accompanied by a careful assessment of their social and equity impact, particularly on low-income populations, to ensure that they do not exacerbate energy poverty or have other socially regressive effects.

Ramping up renewables, together with an aggressive energy efficiency strategy, is the most realistic path towards halving emissions by 2030, as recommended by the IPCC (Figure ES.2).

In the power sector, renewables are faster and cheaper to deploy than the alternatives. But to meet the IPCC goal, annual additions of renewable power capacity will have to be three times the current rate of deployment. Such an increase is possible if the right conditions are in place. Technology-specific targets and policies are especially needed to support less mature technologies, such as ocean energy and CSP.

Renewables-based electricity is now the cheapest power option in most regions. The global weighted-average levelised cost of electricity from newly commissioned utility-scale solar photovoltaic (PV) projects fell by 85 per cent between 2010 and 2020.

The corresponding cost reductions for concentrated solar power (CSP) were 68 per cent; onshore wind, 56 per cent; and offshore wind, 48 per cent.

As a result, renewables are already the default option for capacity additions in the power sector in almost all countries, and they dominate current investments.

Solar and wind technologies have consolidated their dominance over time and, with the recent increase in fossil fuel prices, the economic outlook for renewable power is undeniably good.