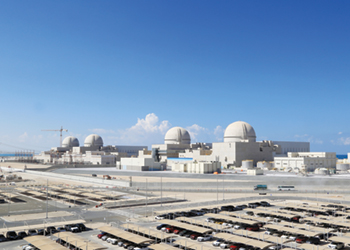 An emerging Gulf nuclear industry must learn from the mistakes of others and solve the waste problem alongside implementation of a nuclear power programme using SMRs, Dr Henry Crichlow tells OGN

In a region facing severe climatic conditions, even the presence of hydrocarbons cannot fully overcome the scarcity of natural resources and the many obstacles facing the Gulf states.

With already high per capita energy consumption expected to increase rapidly, continued development hinges on affordable energy throughout the region. To continue increasing living standards and GDP requires an energy source that can meet high demand in demanding conditions.

Nuclear power operates at two levels: Large-scale nuclear energy consists of, at least, 1,000 MW baseload power, with plants costing billions of dollars and years of planning and construction; while small modular reactors (SMR) generally have up to 300 MW baseload capacity. Rapidly deployable and easily scalable, SMRs would be ideal for the Gulf region.

In the Gulf region, nuclear energy has incredible potential. However, one critical barrier to development exists: Produced waste, which remains dangerous for thousands of years.

As the power section effortlessly produces energy, for decades the disposal end has unsuccessfully sought a solution to the waste problem.

To date, disposal has focused on near-surface mines and tunnels, which face major technical issues.

Unless the Gulf region wants to be like the rest of the world, where billions have been spent with no viable solution achieved, it must prepare a disposal solution from the start.

These short-term fixes greatly increase costs beyond just the financial, coming with safety and environmental concerns while leaving the disposal problem unsolved.

An emerging Gulf nuclear industry must learn from the mistakes of others and solve this waste problem alongside implementation of a nuclear power programme using SMRs.

Waste disposal must be part of implementation, not an afterthought. Near-surface storage for long-term disposal of HLW has been the focus in most countries: In the US, Yucca Mountain (1987); in Canada, the Deep Geological Repository (2002); and in Europe, the KBS Repository (2010).

Over the decades, billions of dollars have been ‘invested. However, these systems all have insurmountable economic and environmental problems. Notably, surface waters can reach the disposal zones in less than 50 years.

No man-made protection can shield the waste from water corrosion for the thousands of years required to keep the environment safe.

Despite this, several such systems are expected to be commissioned in the coming decades.

Furthermore, some current researchers and engineers believe near-surface waste disposal is not the answer. Better technology currently exists to replace these near-surface disposal systems, which waste time and money we cannot afford on false solutions.

One solution to this seemingly intractable problem is the SuperLATTM wellbore, patented technology by NuclearSAFE.

This waste disposal technology was first researched, developed, and patented in the 1990s.

This novel and extremely effective technology is the modified outgrowth of the oilwell drilling industry, a highly developed industry in the Gulf region.

This technology today allows the disposal of thousands of metric tonnes of high-level waste capsules in a single deep horizontal wellbore.

It forms a safe deep repository for waste in impermeable rock formations by drilling more than 10,000 below the surface and then extending up to 15,000 ft laterally.

Waste in capsular form can be quickly and easily placed in these deep repositories. These can be drilled in mere months, and ready for the safe disposal of all the waste produced by Gulf SMRs as soon as the waste sufficiently cools.

This novel patented technology is robust, well developed, and available today. It costs millions, not billions, and a repository can be implemented in less than six months.

Importantly, the well-developed oil and gas infrastructure throughout the Gulf region eases the implementation of the SuperLAT disposal system.

The necessary drill rigs, service and support equipment, and a workforce experienced in the drilling industry are already in place.

The new technology builds on the learned experience gained from an industry where more than 200,000,000 ft of horizontal wellbores are drilled annually in the US alone.

With the infrastructure and know-how already in place, applying the proposed engineering methods to solve the HLW problem in the Gulf region would face no learning curve.

The SuperLAT technology represents the most economical and rapidly deployable system, able to store thousands of metric tonnes of HLW.

Horizontal wellbores form the backbone of a massive industry that has continued to drill lateral wells in every conceivable natural environment, under the most demanding ecological conditions.

With this technology, it is possible to complete a nuclear waste repository system drilled at least 10,000 ft below the surface, and extend the wellbore laterally another 15,000 ft into the disposal formation for a total measured depth of 25,000 ft.

This vertical depth places the HLW far below any surface waters, in a closed geologic basin that can be shown by radioisotope dating to have been undisturbed for, at least, 10,000,000 years.

The deep impermeable formation is considered the ultimate protection for the waste. The capsules are simply short term (10,000 year) devices to transport and sequester the waste in the deep repository formation rapidly and safely.

A dominant feature of the deep lateral wellbore system technology is its speed, versatility, and economy.

For less than $50 million, lateral wellbores can be drilled and completed within 100 days, not the decades required for some near-surface ‘solutions’.

Furthermore, several lateral wellbores may be drilled from the same site by simply walking the drill rig over 200 ft and drilling another wellbore.

Simultaneous operation and cost effectiveness are two critically important issues in this technology for SNF disposal.

Using this new technology, there is no additional need for a ‘town on the surface and a village underground’ to manage the waste disposal operations. The drill rig crew used in this technology is minimal, less than 30 people.

The disposal system is fully automatic and loading the just in time delivered waste capsules, which are prepared off-site, is robotically controlled on the surface, using what have been called ‘iron-roughnecks’ in the oil drilling industry.

This novel technology is safer, quicker, cheaper, more dependable, and can be duplicated several times either sequentially or simultaneously at multiple existing power generating sites and make the nuclear power industry success a reality.

The Gulf region should lead in the SMR development and disposal and not follow the slow developing and arcane approaches now being touted across the world.

* Dr Henry Crichlow is founder and CEO of NuclearSAFE Technologies. A recognised expert in oil andgas, energy and nuclear waste engineering, he helped the Kuwaiti government in extinguishing oil wells set on fire during the Gulf war and analysed the 2010 BP Macondo blowout in the Gulf of Mexico.

Now, Dr Crichlow has turned his expertise to the problem of nuclear waste. His focus now is utilising his brainchild, a patented technology he developed in 1998 to utilise oil well drilling techniques as a cost-effective and scalable solution for nuclear waste disposal.