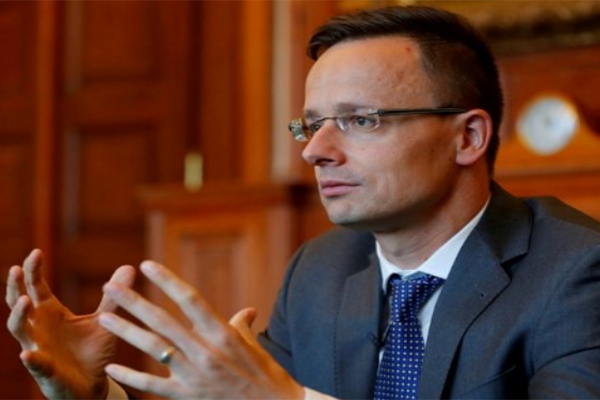 Hungarian Foreign Minister Peter Szijjarto
Russian shipments via pipelines should be exempted from planned European Union oil sanctions against Moscow that, in their current form, would destroy Hungary's economy, its Foreign Minister said on Wednesday.
Peter Szijjarto said that, following talks with EU officials, an agreement between Budapest and Brussels on the proposed ban still looked unlikely.
"Brussels has no proposal for a solution ... which could handle the atomic bomb like impacts of this potential oil embargo against Russia on Hungary's economy." Szijjarto said said in a video posted on his Facebook page.
Most other EU countries support banning Russian oil under a new sixth package of sanctions designed to punish Moscow for waging war on Ukraine. Unanimity is required for such a decision, however, with Hungary the most vocal critic.
Hungarian Prime Minister Viktor Orban and European Commission President Ursula von der Leyen on Monday discussed investment in upgrading Hungarian oil infrastructure, a spokesman for the latter said on Tuesday.
French President Emmanuel Macron also talked to Orban this week.
But Szijjarto said the only way to an agreement would be if the ban applied to maritime oil shipments only and that it would be realistic to return to Hungary's original proposal to exempt pipeline shipments.
Russian oil shipments via the Druzhba pipeline account for about 65 per cent of the oil Hungary needs.
Orban said earlier he was ready to negotiate he saw a new proposal that would meet Hungarian interests. --Reuters
Share