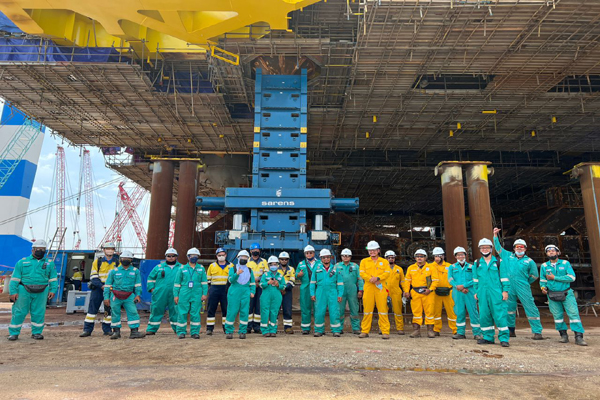 A platform processing module (CPP), weighing 21,100 tonnes, constructed by Malaysia Marine and Heavy Engineering was recently loaded to its final location using Sarens’ CS500 unit.
The unit consisted of set of eight CS5000 hydraulic jacks, each capable of lifting up to 5,000 tonnes, 96 axle-lines SPMTs and 64 mix capacity load cells.
The CS5000 unit is specifically designed for the lifting and installation of heavy loads, such as bridges and entire buildings, while being controlled by a single central computer.
They also have the potential to allow the interconnection of different units for a completely modular application and custom-engineered performance.
During the first phase of production, double 24 axles were used to shift two parts of the LSF, and during the second phase, four sets of 24 axle-lines were used to slit in under the CPP topside module.
The Kasawari CPP has to potential to increase Malaysia’s gas output by more than 900 million cu ft per day and will be able to extract up to approximately 3 trillion cu ft of recoverable gas resources. - OGN
Share