KSA to 'fall short' on its renewable energy targets 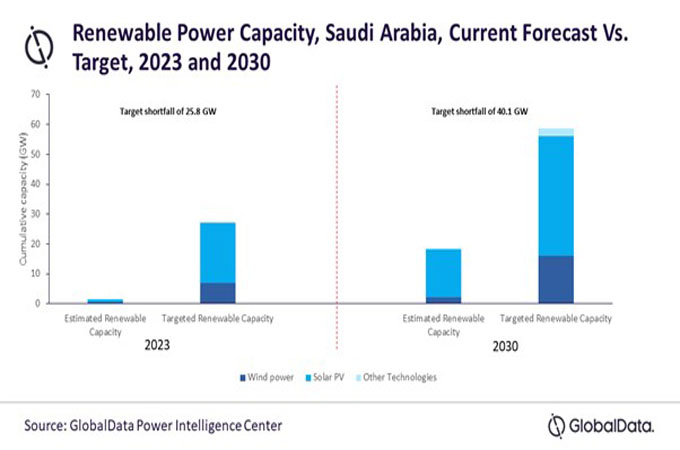 Saudi Arabia is likely to miss its renewable targets at its current rate of development.
Under the Vision 2030, the Kingdom revised its renewables target to achieve 27.3 GW of renewable power capacity by 2023 and 58.7 GW by 2030.
However, at its current rate of renewables development, the country is not even close to the 2023 target and even the 2030 targets look out of reach, says GlobalData, a leading data and analytics company.
GlobalData’s latest report, ‘Saudi Arabia Power Market Size, Trends, Regulations, Competitive Landscape and Forecast, 2022-2035’, reveals that Saudi Arabia’s current renewable capacity additions see the country adding an average of 0.1 GW per year between 2010-2021 which will eventually lead to a shortfall of 25.8 GW to its 2023 target.
Attaurrahman Ojindaram Saibasan, Power Analyst at GlobalData, said: “The power sector in Saudi Arabia is facing numerous challenges when it comes to renewable power. Its issues range from low transparency to a lack of skilled human resources, an overarching bureaucracy, a high dependence on desalinated water, and low energy efficiency. Enforcement of contracts is also a concern. Further, the country is known to be a difficult location in which to start a business, it has low levels of international trade, and there isn't a robust insolvency resolution system in place.”
GlobalData’s report highlights that there is a lack of continuity regarding policy making and administrative direction, which is a major concern for the development of renewable power. For instance, the King Abdullah City for Atomic and Renewable Energy (KA-CARE) which was moderately vested with powers was stripped off its nodal status after the change in government.
Saibasan continues: “Not only does the government need to ensure that the current plans are implemented in a timely manner, but the development of renewable power capacity additions need to be fast tracked if they are to have a chance at meeting the 2030 target. The country should look at enabling strong policies and provide incentives for the growth of small-scale renewable power in the country.
“Further, the institutions and policies that support the development of renewable power are changed too often, and the processes and permits for renewable power plants should be eased. The country could look to extend international partnerships for technology transfer to ensure efficient and reliable renewable power network,” he added. -OGN
Share