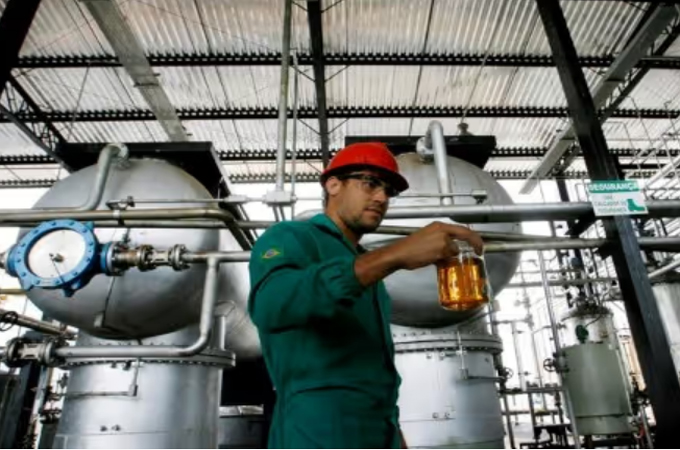 Brazil's National Energy Policy Council (CNPE) decided the mandatory blend of biodiesel in diesel will be kept at 10 per cent until Mar. 31, 2023, the Mines and Energy Ministry said.
From April on, the mix requirement will be increased to 15 per cent, the ministry said in a statement, pointing out that Brazil's next government which takes office in January could change the decision.
CNPE also decided that biodiesel produced by "any technological route of production" may be part of the mixture, which could include Petrobras' R5 diesel, a fuel co-processed with vegetable oil in a 95 per cent-5 per cent ratio.
Brazil's oil, gas and biofuel regulator ANP would first have to approve the biodiesel used in the blend.
Around 70 per cent of the country's biodiesel is produced from soy oil, which is obtained after grain crushers process the beans.
With a 15 per cent mandate being adopted as of April, the total soybean demanded for biodiesel would rise to about 30 million tonnes in 2023.
The decisions sparked protests from biodiesel producers, as Petrobras' R5 could be a competitor, hurting the biofuel industry which says it should not be eligible for blending.
"It is not biofuel," said Donizete Tokarski, managing director at industry group Ubrabio, referring to Petrobras' diesel.
Petrobras did not comment immediately, but has previously said its product is efficient, reduces emissions because it has renewable content and has a chemical composition similar to diesel derived from petroleum.
Tokarski also said he is confident that Brazil can adopt a 15 per cent mandate in April, but that ideally the change will not be so abrupt.
For Francisco Turra, chairman of the board at producers association Aprobio, keeping the mandate at 10 per cent and allowing the use of co-processed diesel for blending could represent "a death blow to the entire sector and to the entire biodiesel production chain".
"The unlikely inclusion of co-processed diesel is another issue that lacks technical support, since the regulator ANP itself does not consider the product a biofuel," Turra said. -Reuters
Share