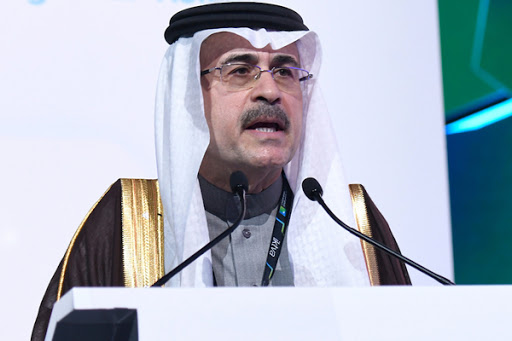 State oil giant Saudi Arabian Oil Company (Aramco) has registered a 30 per cent jump in its net income which soared to $21.7 billion for the first quarter from $16.7 billion, primarily driven by a stronger oil market and higher refining and chemicals margins, partly offset by lower production.
Announcing the results for the first three months ended March 31, Aramco said this growth was underpinned by higher oil prices and an improved economic environment in the first three months of 2021.
During this period, Aramco demonstrated reliable upstream performance with an average total hydrocarbon production of 11.5 million barrels per day of oil equivalent in the first quarter of 2021, including 8.6 million barrels per day of crude oil.
Cash flow from operating activities and free cash flow was estimated at $26.5 billion and $18.3 billion respectively in the first quarter, while first quarter capital expenditure stood at $8.2 billion, said the statement from the oil giant.
Aramco's gearing ratio remained unchanged at 23% on March 31, 2021, compared to December 31, 2020, it added.
Impressed with the results, Aramco has declared a dividend of $18.8 billion for the first quarter, to be paid in Q2 2021. The Q4 2020 dividend of $18.8 billion had already been paid in the first quarter.
On the Q1 performance, President & CEO Amin H. Nasser, said: "The momentum provided by the global economic recovery has strengthened energy markets, and Aramco’s operational flexibility, financial agility and the resilience of our employees have contributed to a strong first quarter performance."
"For our customers we remain a supplier of choice, and for our shareholders we continue to deliver an exceptional quarterly dividend," he noted.
According to him, the company maintained its exceptional track record as a global energy supplier, achieving 100% reliability in its deliveries to customers during the first quarter.
In January, Aramco partnered with stc, a leading telecom and technology services company, to launch one of the world’s most powerful supercomputers, Dammam 7.
Its high-performance computing capability of 55.4 petaflops presents new opportunities in both exploration and development, enhancing Aramco’s ability to predict the location of new reserves using sophisticated imaging and artificial intelligence deep learning technologies.
Dammam 7 supports Aramco’s digital transformation program, complementing a suite of advanced technologies that are reshaping core operations, driving efficiencies and reinforcing its industry leadership.
During the first quarter, Aramco and The Dow Chemical Company, partners in the Sadara Chemical Company (Sadara) joint venture, entered into agreements relating to their Sadara joint venture.
This includes extending the debt repayment tenure, a grace period for interest payments and sponsor guarantees. It further includes other agreements with respect to procurement of feedstock and marketing rights for Sadara’s finished products.
"We made further progress towards our strategic objectives during the quarter and our portfolio optimization program continues to identify value creation opportunities, such as the recent announcement of our landmark $12.4 billion pipeline infrastructure deal," explained Nasser.
"We also expect Saudi Arabia’s newly-launched Shareek program to present growth opportunities, through incentives which encourage partnerships and investment," he noted.
"Given the positive signs for energy demand in 2021, there are more reasons to be optimistic that better days are coming," remarked Nasser.
"And while some headwinds still remain, we are well-positioned to meet the world’s growing energy needs as economies start to recover," he added.
Share