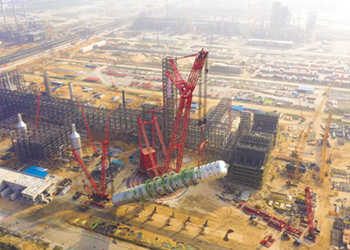 The company made use of its heavy lift expertise to move 52,000 tonnes of construction components, including a 2,000-tonne crude column and a 3,000- tonne regenerator at the Dangote Group's upcoming refinery in Nigeria's Lekki Free Zone, Lagos

The Dangote Group planned a world-class new refinery in Nigeria that would reduce the country’s reliance on imported energy and bring with it over 30,000 jobs.

It was a project requiring some truly massive moves – among the continent’s largest, in many cases. But before work could even begin, the team had to tame this patch of reclaimed swampland, turning it into a stable heavy lift surface.

To support the drive for growth, Africa is looking to reduce reliance on imports; producing more of its own energy and raw materials. In Nigeria, this drive is led by businesses such as the Dangote Group of Companies, which is putting the finishing touches on the continent’s largest oil refinery in Lekki Free Zone, Lagos State.

This development has been on a truly epic scale. The journey from Dangote’s new, purpose-built jetty to the construction site was more of a commute than a transportation; covering some 10 km. Over 52,000 tonnes of components were planned for construction - including a 2,000-tonne crude column that is the largest ever fabricated, and the heaviest item ever transported on public roads in Africa: a 3,000- tonne regenerator.

The demands here were not simply to move such exceptional dimensions and weights but also to ensure all components were coordinated to arrive in the desired sequence - minimising the risk of delays and additional costs.

Giuseppe Surace, Chief Operations Officer at Dangote Refinery, explains: 'Our new refinery is the most ambitious project of its kind ever seen in Africa. Given the scale and importance of the work involved, we knew that we needed an experienced engineered heavy logistics partner who could successfully overcome challenges in the site terrain as well as the volume and size of construction components.

'This was key to ensuring that delays to our critical path were kept to a minimum, and that we are able to have the plant operational as quickly as possible.'

In any part of the globe, this would be a challenge very few organisations could fulfil. Yet the requirements in Lekki Free Zone were complicated further by its location on reclaimed ground next to the coast.

To withstand the required weight and frequency of traffic, surrounding swampland needed to be reinforced. Conventional approaches to this problem include piling, or soil stabilisation, which requires excavation work and high volumes of aggregates. Although effective in providing the required stability these solutions can be expensive, time consuming and in some cases cause land reclamation problems, later on.

Working with Nigerian partner Northridge Engineering, Mammoet was selected to meet this challenge. A solution was laid down that could support this web of logistical activity, providing the sheer strength needed to withstand the transport of such massive cargo across this former river delta.

This solution – Enviro-Mat - is a highly-developed soil improvement methodology, consisting of a combination of local soil, cement and additives including minerals, salt and zeolites, which increases ground bearing capacity up to 50 tonnes per sq m. At Dangote, Mammoet applied this additive to laydown areas, hard stands and crane pads covering over 500,000 sq m of the site.

A significant endeavor – equivalent in area to over 50 soccer pitches – but its benefits extended well beyond the establishment of a flat, solid surface.

Harm Tiddens, Mammoet’s General Manager for West Africa, explains: 'The need for ground stabilization can have a significant bearing on projects, so using the Enviro-Mat system gave us some real advantages. Not only were we able to undertake lifts of up to 3,000 tonnes on reclaimed swampland, but the huge area stabilised proved crucial for laydown operations to continue smoothly throughout the rainy season – when this kind of land could otherwise be a challenge to operate on.'

Enviro-Mat allowed for quick and easy site upgrades, where required. Following discussions early in the project, Mammoet advised Dangote on roads that needed civil works to support the planned traffic, for example, by widening and levelling turns. Works were undertaken to ensure that these roads were well-prepared for the weight of cargo they would carry, in particular between the site and its jetty.

Two of Mammoet’s largest super heavy lift ring cranes – the PTC 200 DS and PT 50 - completed key lifts at the refinery. The combination of mobility offered by crawler cranes on site and the sheer lifting power – over 3,000 tonnes – of the ring cranes meant there was equipment on site to meet a wide range of lift requirements.

Rather than being dismantled and re-assembled, the high ground bearing pressure capability provided by Enviro-Mat allowed for the PT-50 crane to be simply picked up and carried via SPMT between major lifts. This process saved four weeks of time for each crane relocation phase, adding up to a significant schedule enhancement for the project as a whole.

To ensure cargo was on site and ready for installation when needed, Mammoet mobilised a huge selection of equipment during its two-year stay on site. Hundreds of axle lines of SPMT, the two ring cranes, plus many crawler cranes and auxiliary equipment were available when needed – even when plans changed at short notice.

In all, seven Enviro-Mat yards were created, including laydown areas totaling 253,776 sq m, assembly surfaces totaling 36,059 sq m and 78 heavy lift crane hardstands totaling 80,000 sq m - at a maximum rate of around 5,000 sq m per day. Following demobilisation, these surfaces will either be reused as the base-course for new roads, or finely milled back into the local soil - without pollutants seeping into the groundwater.

Once fully operational later in 2021, the refinery will process 650,000 barrels of crude oil per day. It will transform the local economy, creating thousands of jobs and helping to secure a more prosperous future for African industry.

Tiddens looks back on a job well done: 'The successful completion of our scope at the Dangote Project has required a balance of planning expertise and the smart use of equipment to ensure the right solution was on hand when needed.

A project of this scale demands a high degree of flexibility in when and how items are needed to be transported to the site and installed, which is where Mammoet’s large global network of equipment and expertise became invaluable.

The team deserves significant credit, having operated under some of the most challenging circumstances to make the project succeed. For example, when the coronavirus pandemic arrived, they found new ways to keep productivity high while making sure everyone stayed safe.'

Expert planning was required to tackle the demanding scale of the Dangote refinery – in terms of cargo weights, volumes and the vast web of delivery schedules. All the while, Enviro-Mat provided the foundation for this transformation - turning barren swampland into a platform for meaningful economic growth.