US to restart offshore auction this year

WASHINGTON: The Biden administration has said it would take steps to restart the federal oil and gas leasing program in the next week and plans to hold a Gulf of Mexico auction as soon as October.

The move comes two months after the U.S Interior Department first said it would comply with a June 15 federal judge's order blocking its months-long pause in oil and gas leasing on federal lands and waters. That order was a blow to a key White House effort to address climate change by reining in fossil fuel extraction.

The agency will take procedural steps by the end of this month to prepare for a sale of oil leases in the Gulf of Mexico. The auction itself is expected in October or November.

SINGAPORE: China National Petroleum Company (CNPC) has outlined plans for new shale oil production from formations within the area of the existing Daqing oilfield that will help replenish that site's diminishing output.

CNPC said it aims to produced 1 million tonnes of oil annually by 2025 from the Gulong shale oil formations at Daqing in northeast China's Heilongjiang province.

CNPC has drilled several key exploration wells in the Gulong formation including the Guyeyouping 1, Yingye 1H and Guye 2HC, all of which have yielded high volumes of oil in test production. As China's biggest oilfield, Daqing has pumped for the past 60 years but its reserves are quickly depleting and CNPC is turning to shale formations near the field to replace the output.

Japan's offshore power market is expected to take off after the government brought in a law in 2019 to encourage the development of wind farms. The government aims to install as much as 45 gigawatts (GW) of offshore wind power by 2040 in a bid to achieve its goal of carbon neutrality by 2050.

RWE is working on three floating demonstration projects in Norway, Spain and the United States, while Kansai Electric is working to develop more than 2 GW of new renewable energy sources

MOSCOW: Rosneft chief Igor Sechin has told the Kremlin that carbon border taxes like the EU's could inflict far greater damage to Russia's economy than sanctions.

The European Commission has outlined plans to impose a CO2 tariff on polluting goods from 2026 that will force some importers to pay carbon costs at the border on carbon-intensive products such as steel.

Moscow has said the tax could affect Russian goods worth $7.6 billion, including iron ore, aluminium, pipes, electricity and cement, and that the tax could eventually be broadened to affect oil, gas and coal exports.

KYIV: The energy ministers of Ukraine, the United States and Germany have discussed guarantees for Ukraine about its future as a transit country after the construction of Russia's Nord Stream 2 gas pipeline.

Kyiv fears Russia could use the pipeline, which will bring Russian gas to Germany under the Baltic Sea, to deprive Ukraine of lucrative transit fees.

Ukraine is bitterly opposed to a deal between Washington and Berlin over Nord Stream 2, which will carry gas to Europe while bypassing Ukraine. US President Joe Biden's administration has not tried to kill off the project with sanctions, as Ukraine lobbied for.

Sinopec carbon project to start by 2022

As diesel consumption has peaked and gasoline demand is expected to peak in China in 2025-28, the refining industry is seeking to diversify.

The project is designed to produce 12,000 tonnes per year of 48K large-tow carbon fiber, which contains 48,000 continuous filaments in one bundle, giving it greater stiffness and tensile strength compared with current small-tow carbon fiber that contains 1,000-12,000 filaments. It is also cheaper to make when mass produced. 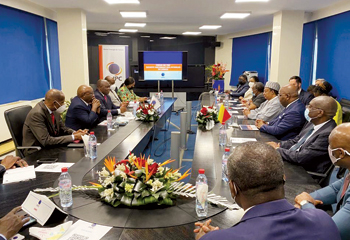