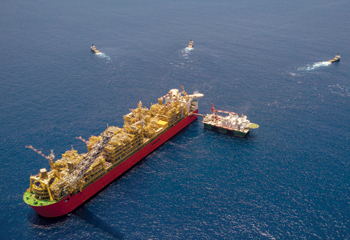 The floating production storage and offloading (FPSO) sector is seeing a steady rise in demand after oil prices started to show signs of recovery. Numerous new projects have been awarded globally and others are in the pipeline as the sector presents a promising outlook.

A recent report by FPSO Network has looked into market shifts, investment priorities and opportunities outlook, in addition to where the growth regions are and what challenges continue to lie ahead.

The global Covid-19 pandemic greatly impacted the oil and gas industry, including the FPSO sector. It like many industries had to adapt to new processes, remote (or hybrid) working environments and explore new technology available to ensure operations continue to run smoothly after the Covid-19 pandemic struck globally.

Rising oil prices following the pandemic continue to boost confidence levels in the FPSO industry. With the FPSO market expected to progress smoothly, solution providers need to continually meet with oil operators and FPSO contractors alike. At the same time, they are cautious on balancing capex and opex, in order to ensure there is a balanced whole-of-project lifecycle costs.

According to senior research analyst Catarina Rodevyn at Wood Mackenzie: "Overspending is a thing of the past. Despite the market’s recovery, we expect development budgets will have to stretch further than ever."

There has been a shift in priority regions in 2021. Back in 2019, Brazil came in third. There is, therefore, no surprise that solution providers are now increasingly focused on Brazil, as the South American oil giant takes up the majority of FPSO orders globally.

According to a Market Intelligence report developed by the FPSO Network and IHS Markit, South America continues to be the brightest spot for FPSOs globally. In fact, analysts predict that Brazil would lead global FPSO market until 2025.

Data from IHS Markit reveals that there are many projects currently under construction in Central and South America, particularly in Brazil, Guyana and Mexico.

In addition, IHS Markit believes that 5 more FPSOs will be awarded for South America in 2021 – 4 newbuild and 1 conversion.

One of the leading players in the region, Petrobras, has recently revealed plans to invest $46 billion, or 84 per cent of the total investments, in exploration and production.

One of the biggest shifts in the market is the added focus on low carbon. The energy transition has now taken front seat in major oil and energy players around the globe, which signifies a change in strategy and models for FPSO players as well.

The reality is that a global energy transition is well under way, and it presents great challenges and opportunities.

Many sector players have emphasised the availability of solutions in developing low carbon FPSOs in line with current market trends and focus.

The rising discoveries of offshore reserves, along with the increasing global demand for hydrocarbons, favour the adoption of advanced FPSO units.

On the other hand, many oil and gas companies are dealing with uncertainties by shifting investments into ESG-friendly projects.

As oil and gas demand could decline rapidly due to renewed push for energy transition, companies may need to deal with the financial risk posed by stranded assets. This situation may prove to be more acute for offshore oil and gas platforms as these are long-lived conventional assets.

To mitigate these risks, market leaders must recalibrate their value propositions and adapt measures to achieve commerciality while meeting sustainability objectives. For example, greenhouse gas emissions can be reduced greatly by eliminating methane leaks from existing infrastructure.

Companies could also look into increasing investments in carbon capture, use, and storage technologies. And while the focus on energy transition has always been around carbon emissions, shale producers could also tackle the challenge of fresh water use and waste water disposal as a way to make their operations more sustainable. By recycling and reusing produced water, cost efficiency could also be achieved.

As FPSOs make moves to adapt to energy transition as part of a long-term strategy, in the near term, it is also worthy to explore upcoming FPSO commercial opportunities around the world.

According to IHS Markit, FPSO projects under construction or planned in various regions is as follows. This list is only a selection of awarded and planned projects, and not a full list.

Asia Pacific: Globally, around 15 per cent of FPSOs now in service are in Southeast Asia while Australia accounts for 5 per cent.

The Asia Pacific region’s growing energy demand in the coming decade is driving exploration activities at an all-time high. The need to work on much deeper waters require FPSOs to have sophisticated technology and equipment to serve growing needs.

In this region, the FPSO market is partially consolidated with some of the top players holding a strong grip of the market.

Europe, Middle East and Africa: FPSOs are expanding their presence in Europe and Africa. While not a totally new concept, the region has been showing renewed enthusiasm for floating production, storage, and offloading (FPSO) vessels.

IHS Markit data reveals that there are currently six FPSO projects under construction between the regions of Europe, Middle East and Africa.