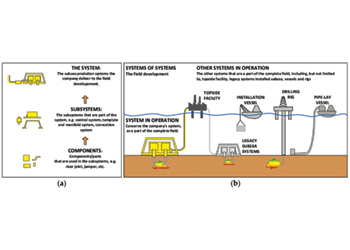 The subsea production system showing the subsystems and components

There is a need to improve the understanding of the long-term effect of the decisions made in the early phase to cope with the changes in the oil and gas industry, a paper by Norwegian researchers shows

A recent research paper has found that engineers in the energy industry are not sufficiently aware of encompassing systems of systems (SoS) and that they do not focus on the context in the early phase development of oil and gas fields.

An SoS is a collection of independent systems, integrated into a larger system that delivers unique capabilities.

The in-depth study was carried out by Siv Engen, Kristin Falk and Gerrit Muller, researchers at the University of South-Eastern Norway within the context of the Norwegian energy industry to evaluate engineers’ awareness of the SoS and the operational context of their system during the early phase.

The company of research is a major supplier of systems and services to the oil and gas industry and the context is the early phase of projects in the subsea domain.

The study also sought to understand the barriers to exploring and understanding the system and operational context in the early phase, in addition to studying the important aspects when developing and implementing approaches to improve systems awareness in the early phase in the subsea industry.

The research has corroborated previous studies, which show that that the stakeholder’s exploration and understanding of the SoS is poor. This has resulted in problems during integration, commissioning, or deployment of the system in the broader context.

Since the first oil and gas field development at the Norwegian Continental Shelf in the mid-1970s, the petroleum industry has been an essential contributor to the Norwegian economy.

The industry had its golden age from 2000–2014, with income from the sector contributing to 12 per cent of the country‘s GDP.

During that period, operators developed a high number of new fields at the Norwegian Continental Shelf. The focus was on delivering the subsea systems with short lead times.

The cost level increased rapidly in that period, and was in fact significant compared to the activity increase.

But in 2014, the oil price dropped significantly, and the oil and gas industry globally went through a downturn.

Following this downturn, the oil and gas industry has undertaken several changes to cope with the challenges. Three shifts that have significantly changed the industry include: from capital expenditures (capex) to total cost of ownership (TCO); new business models and joint ventures; and energy transition.

Since the downturn, the focus has shifted towards the total cost of ownership, including the operational expenditures (opex), which is the cost of operating the system through its life cycle.

An oil and gas field development is complex with many constituent systems and actors. In the early phases, subsea systems suppliers develop and propose system concepts for the field, and based on these concepts, they commit to cost and schedule.

Making the correct design decisions in this phase is key to making the project viable because as the system design matures, the cost of changes becomes increasingly expensive. Here, systems architecture can support exploring the needs and design of a system.

The importance of systems architecture is to enable a way to understand the complex systems, to design and manage them, and to provide long-term rationality of decisions made early in the project.

Architecture should be considered as a set of decisions about the system, making architecting a decision-making process.

It is the decisions made in the early phase of system development that decide most of the system’s value, cost, and risk.

A major reason for the cost overruns in the oil and gas industry is the poor identification of the operational needs in the early phase.

In such industries, where the end-user is not directly involved in the development, operational requirements and lifecycle considerations often have lower priority than minimising initial capital expenditures.

However, understanding the interactions of all products, systems, and services is key to developing systems that operate as intended.

Architecting and designing good constituent systems requires awareness of the context in which they operate and understanding of the system’s role in a larger capability.

CHALLENGES OF DECISION-MAKING IN EARLY PHASE OF MULTI-DISCIPLINARY PROJECTS

Decision analysis is important in the early phase of the field development to optimise the production profile and improve project performance.

Decision-making in the oil and gas industry is often focused on the investment cost, focusing less on the total cost of ownership.

In the early phase, engineers need to explore business opportunities and needs, and develop high-level concepts. The stakeholders’ concerns should be clarified in this phase, and the key drivers should be captured.

Balancing the internal and external key drivers is one of the most critical responsibilities of the system architect in the early phase.

However, there are obstacles when managing complex systems. These include lack of system overview, ineffective knowledge sharing, finding system information and communicating across disciplines and departments.

Previous studies find the lack of cross-functional knowledge as the top challenge, followed by the challenge of early identification of system-level problems.

They state that problems are often not identified until the physical prototype is developed, highlighting the need for early prediction and models of the system’s behavior.

Studies claim that silos are one of the obstacles to knowledge transfer in the oil and gas industry and manifest in the inability to deliver value.

One of the causes of delays in cost overruns in the subsea oil and gas industry is the complicated information flow, challenging the overview of the system and its interactions.

Especially in the early phase, formal systems engineering tools are considered too complex and time-consuming for many stakeholders.

According to the results, the majority agreed or strongly agreed that they understood their system’s context in operation.

In the early phase of the system development of subsea systems, the suppliers make decisions that will affect the project’s overall profitability.

The awareness of the system context and the operational scenarios can support identifying operational needs and reducing the risk of late design changes.

An improved understanding of the life cycle impact can also support the system suppliers in utilizing the upside of uncertainty to improve their offering.

The study found that the system context and operational scenarios were given insufficient focus during the early phase.

It also showed that the engineers focused on their system and did not pay attention to their systems’ interactions with the other systems in operation.

Thus the engineers knew which systems were present in the field development but had less understanding of how they operated together to fulfill the encompassing system’s capabilities. Yet they did not improve the focus on the system context and operational scenarios in the daily work.

The study identified five barriers perceived as challenging the explorations and understanding of the system context in the early phase. These include the lack of a holistic mindset, poor balancing between internal strategy and customers’ needs, organizational factors, the lack of overall systems knowledge, and the availability of operational knowledge.