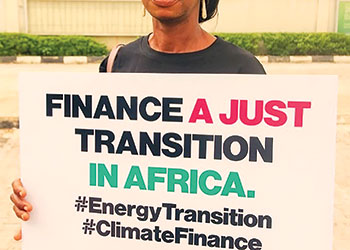 Protestor advocating for financing for just transition in Africa

With fossil fuel use creating 65 per cent of greenhouse gas (GHG) emissions, divestiture is at the heart of the global climate change agenda, and many Western banks are no longer financing investments in African oil and gas.

However, without downplaying the climate change crisis, curbing investments in fossil fuels could severely hamper growth in an already underdeveloped region.

There is nowhere else with an electricity deficit like Africa’s, and where 600 million people still live without a reliable source of power.

Calling then for a disorderly phasing out of fossil fuels could have severe economic and social consequences for African countries, because fossils represent the principal source of export earnings and fiscal revenues, jobs creation, fossil-based power generation/supply and powering fossil intensive industries.

For instance, divesting from fossil fuel could cut as much as $30 billion off Nigeria's GDP and almost $190 billion off the continent's GDP

These observations were made by Dr Benedict Oramah in his extensive commentary, entitled ‘Transiting to green growth in fossil export-dependent economies: A pathway for Africa’.

Dr Oramah is neither a climate science denier nor a fossil-fuels-at-all-cost advocate.

In his paper, he is honest about the effect rising temperatures have already had on the continent, citing the devastation brought by extreme weather events — disastrous rainstorms on one hand, catastrophic droughts on the other.

He casts a wary eye on the future, recognising that developing parts of the world like Africa are at greater risk from climate change than are developed nations.

In his commentary, Dr Oramah acknowledges that urgent climate action is vital and that the time for foot-dragging is over.

At the same time, Dr Oramah doesn’t overlook the fact that fossil fuels financed by foreign capital have been the economic engine of many African nations.

He also doesn’t neglect to mention that, as major oil companies find themselves on the receiving end of divestment pressure and seek "less risky" assets, investment in the continent’s oil and gas sector has fallen significantly, from $60 billion in 2013 to $22.5 billion in 2020 by African Energy Chamber estimates.

One shudders to think what would happen to the continent’s major oil-exporting countries — including Algeria, Angola, Equatorial Guinea, Gabon, Congo Republic, and Nigeria, where fossil fuels represent anywhere from 7 per cent to 37 per cent of GDP — should the industry evaporate altogether.

The social and economic repercussions — some of which are already playing out as investment has tightened — would be profound as export earnings and revenues dry up, fossil fuel-dependent factories shutter, the already limited fossil fuel-powered grid is strained further, jobs are lost, and poverty ripples even farther through even more communities.

And, of course, the backdrop to all this is the fact that nowhere else is there an electricity deficit like Africa’s. Six hundred million people still live without a reliable source of power.

Fortunately, Dr Oramah’s commentary isn’t without hope. He poses an interesting question: Is it possible to reconcile the world’s carbon reduction goals with Africa’s right to use its resources and achieve a smoother and "less painful" transition to renewables?

He answers with a promising solution: using earnings from fossil fuels "to support an orderly economic diversification and structural transformation programmes and, importantly, to maintain a meaningful economic livelihood for the most vulnerable population."

The institutional structure to accomplish those goals, Dr Oramah says, is an African Energy Transition Bank — which his bank is working to establish in partnership with the African Petroleum Producers Organization (APPO).

Restore and leverage African and global investment flows into the continent’s oil and gas industry over a transitional period.

Mobilise funding to support investments into the energy value chain of its members.

Support diversification of the fossil-dependent economies to mitigate the economic cost of transition.

In addition, Dr Oramah wrote, the bank will promote intra-African trade and investment to reduce the sizable carbon emissions derived from the externalisation of Africa’s supply chains. Some 85 per cent of Africa’s trade is extra-African.

It would be difficult, I think, to find fault with Dr Oramah’s concerns, assertions, or well-considered plans. Redirecting current fossil fuel revenues to greener industries on a measured timetable with appropriate benchmarks — that’s how Africa can help mitigate environmental harm, stabilise vulnerable economies and prepare them for growth, and incentivise the development of low-carbon, green power across the continent. It’s a win all around.

The development of an African Energy Transition Bank does one more thing, though it’s not mentioned in Dr Oramah’s commentary.

It reduces our need for foreign aid, the traditional bandage for African poverty. We intend to push him on that issue during African Energy Week in Cape Town.

As I’ve written in my books and editorials, Africa doesn’t need hand-outs. They do more harm than good by blocking the potential and opportunities for poor people to help themselves. After all, it’s hard for local farmers to sell their crops or eggs or cattle when they’re competing with free food from a foreign government or institution.

What we do need are skills development, infrastructure, and enabling environments to build vibrant economies — things I sincerely believe are possible through the work of a multi-billion-dollar, pan-African energy bank and its capacity-building.

The African Energy Transition Bank will serve as a catalyst for private investment. By channeling these funds into African projects, the bank will drive homegrown development and socioeconomic growth while increasing access to electricity for everyday Africans.

In short, Africans will be doing it by ourselves and for ourselves, without Western assistance or, more to the point, interference.

Dr Oramah’s commentary gives the world a much-needed voice of reason when it comes to Africa’s energy transition.

The pragmatic approach he proposes for Africa’s energy transition respects the global community’s need to slow climate change—and holds our continent responsible for helping the world achieve that vital goal. But it also shows that we can protect our planet and people without sacrificing African needs and priorities.

He also serves as Chairperson of the Africa Chapter of the International Factors Group (IFG) and is on the Board of the IFG and the editorial boards of Trade and Forfaiting Review and the Journal of African Trade.