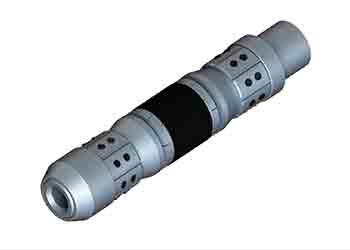 Unable to get the plug and perf bottom hole assembly (BHA) to the desired location successfully has led to severe non-productive time (NPT) in many major unconventional shale regions. These NPT are not likely to be caused by plug presets but mostly are caused by downhole debris and casing deformities.

To counter downhole restrictions, frac plugs with smaller outside diameter (OD) for stimulation were implemented. By reducing the OD of the plug (and BHA), it minimises the risk of being stuck between tight spots, but it also reduced the effectiveness for stimulation due to lower pressure rating, rising the risk of skidding (slips losses anchoring), and increasing the amount of fluid used for pump down. These issues not only reduce productivity of the well, but they also increase the overall completion time and costs.

To truly overcome downhole restriction challenges, a frac plug must be small enough to pass through most tight spots, where original OD frac plugs cannot, but still being able to maintain good anchoring and sealing, as well as reducing the amount of fluid required to be pumped down to its designed depth.

On the other hand, the larger the gap between the plug OD and casing ID, the higher the expansion rate is required for the frac plug to isolate the casing, which has relatively weaker anchoring, thus reducing pressure rating, and requires more fluid to pump down, but it has a lower chance of being obstructed or stuck.

To maximise production, stimulating the well at higher pressure tend to maximise fracture network growth. So in multistage hydraulic fracturing, frac plugs with higher pressure rating (smaller gap between plug OD and casing ID) are most commonly preferred. Take a 5.5-inch 20# casing, for example; these frac plugs normally have an average OD of 4.4 inches, with an expansion rate of 8-12 per cent, and pressure rating of 10,000 psi.

For most 5.5-inch 20# cased hole completions in the US and part regions of China, the annular clearance between the casing ID and frac plug OD is around 0.2 inches on the X-axis for each side and 0.4 inches on the Y-axis. Imagine if the plug encounters any forms of debris, sand accumulation, or deformed interval during pump down within such confined space, there is a chance that the plug will be obstructed or become fully stuck. These uncertainties bind with every pump down operation, and to minimise these risks, plugs with smaller OD are used for these 'emergency' events.

Smaller OD plugs have a much better chance to pass through tight spots, but as mentioned earlier, they also require a higher expansion rate to isolate the casing and tend to have a lower pressure rating.

Again if we take a 5.5-inchs 20# casing, for example, these plugs have an average reduced OD of 3.8 inches to pass through restrictions, with an expansion rate of 20-25 per cent to isolate the casing and 5,000-7,000 psi pressure rating. They are not as effective as original OD plugs in stimulation, since they tend to have a lower pressure rating in casings which aren’t meant for their size, and also requires more fluid to be pumped down to the desired depth.

So if we want to get the most out of each stage, the original OD plugs are preferred since higher pressure will maximise fracture network growth, which improves productivity. But if running an original OD plug into the well is no longer an option, then stimulating the stage with a smaller OD plug at a lower pressure is better than no stimulation at all.

For every problem, there is a solution, and before we jump into the solution, let’s first look at the problems for both original OD and smaller OD plugs.

As mentioned, every pump down operation faces uncertainties. If lucky, the BHA only loses its speed in the horizontal lateral due to impact or obstruction, and it is then forced to be lifted towards the heel and attempt another run. On the other hand, another pump down will be spending your valuable water stored on-site, and its success is never guaranteed.

If a dissolvable frac plug is used, overextended pump downtime can compromise its integrity, so it is very likely that the BHA will be forced to be lifted out of the well; and a new plug is then used to replace the previous one, which might have shown signs of degradation or damage.

But in the worst-case scenario, the plug gets stuck in a tight spot either caused by downhole debris or casing deformity. The wireline crew must set the plug to retrieve the BHA after failing to free the plug. This will definitely put the pad on NPT and its severity will determine the days and dollars spent trying to get everything back to normal.

After getting everything back to normal, the well is then flushed at high displacement to clean the wellbore of debris or sand. However, if casing deformity was the main cause, then the operator must work out the minimum deformed casing ID clearance, and find a plug that is small enough, together with reduced OD setting tool and perf guns if needed, to pass through the deformed interval and then set inside the 'normal' interval below.

Assuming a decision has been made to pump down a new BHA with reduced OD, which hopefully will be able to pass through the minimum casing ID restriction. However, a BHA with smaller OD is more difficult to pump in the horizontal lateral. Since the annular space within the casing is now larger, and the fluid intercept area is smaller, this will reduce the propelling force of the fluid at a given displacement.

To reduce the fluid volume required and to speed up the pump down process, some frac plugs come with optional pump rings. The pump ring increases the fluid intercept area, generating extra propelling force from the bypassing fluid in the annular space, thus, reducing displacement and fluid volume required, and allowing the BHA to be pumped down at a higher speed. However, these pump rings also pose potential risks during pump down and drill out. So in the case of downhole restriction, it is very likely that the pump rings are removed prior to pump down, to avoid unwanted troubles.

After a successful pump down below the deformed interval, the smaller OD frac plug is then set inside the casing at the desired depth, to establish temporary isolation for the stages below. During the setting process, the slips move along the slope of the cone, towards the casing ID, and the slip buttons bite into the casing wall, to anchor the frac plug in place, preventing it from moving axially.

How deep the slip buttons bite into the casing wall, determines how reliable the anchoring will be, preventing the plug from skidding under pressure.

Normally, plugs with smaller OD tend to have a weaker bite, since the gap between its OD and the casing ID is much larger. This is why plugs with smaller OD have a much higher chance of skidding under such circumstances. With that in mind, the stimulation pressure is deliberately lowered, to prevent the plug from skidding. This means that a particular stage or stages can be under-stimulated, affecting overall productivity.

Understanding the trade-off and disadvantages of both original and smaller OD frac plugs, a new type of 'high expansion dissolvable plug' (HEDP) was introduced to the market to resolve the above challenges. HEDP has an expansion rate of up to 30 per cent and is capable of covering a much wider range of API casings for 4.5 inches and 5-5.5 inches, without sacrificing its pressure rating, and eliminating or reducing drill out time. This gives the operators more flexibility to tackle downhole restriction challenges, to stimulate the well as planned, getting the most out of each stage, and reducing overall completion time and costs.

HEDP can pass through many tight spots where conventional sized frac plugs cannot. It is also capable of maintaining a pressure rating up to 10,000 psi.

To be able to bite 'deep' into the casing wall, the slope of the cone and the material of the slip plays a major role, in addition to the setting force and setting stroke.

The cone of an HEDP has a steeper slope; this allows the slips to extend further circumferentially towards the casing ID. It also utilises a special dissolvable metal for its slips, which have much higher elongation property, comparing to traditional dissolvable metal.

A higher elongation helps the slips to move up the steeper slope of the cone more easily, allowing the slips to fully engage with the casing. With this extra 'elevation', it helps the slip buttons to bite deeper into the casing wall, with a much more powerful bite. The slips are now less likely to be compromised under higher pressure.

As the OD of the BHA gets smaller, it becomes more difficult to be 'pushed' along the horizontal lateral while the fluid intercept area has been reduced. To get the BHA to the designed depth, more fluid is pumped down the well at higher displacement, increasing overall costs.

To save water, some frac plugs come with optional pump rings, opening up during pumping, increasing the fluid intercept area, and providing propelling force, which reduces the amount of fluid required. However, it becomes a part of the material left downhole and has to be drilled out or dissolved after stimulation.

There have been cases where multiple pump rings have gotten stuck between the bit and casing ID during drill out runs, causing severe NPT. The best way to prevent this from happening is to not install the pump ring on the plug, but somewhere else, that can be retrieved as soon as the plug is set and perf guns are fired.

An HEDP’s setting sleeve (part of the wireline adaptor kit) comes with an optional pump ring. It functions as every other pump ring, but it does not stay in the well with the plug after setting, therefore, improving dissolvability and minimising drill out risks.

Casing deformity is extremely common in the south-west shale region of China and the Middle East, where 5.5-inch 26.8# casing is widely used, while most frac plugs’ OD is designed to be 4.055 inches or slightly larger. These frac plugs frequently run into restrictions. A few BHAs have been lost in the hole and were unable to be fished out after multiple attempts, causing NTPs from 3 days up to two months. Some wells were forced to skip the 'problem zone' due to severe downhole restrictions, losing 10 to 23 per cent of total stage count.

During pump down, the pump ring on the setting sleeve functions to save water and speed up the process with a displacement range between 7.55-10.1 bpm, and a safety wireline speed range kept between 210-250 ft/min.

During stimulation for the 5th and 6th stages, 10,298-10,370 psi maximum pressure was observed on the surface, with an average duration of 2 hours, and no indications of skidding.

According to micro-seismic monitoring interpretations, these zones were effectively stimulated compared to previous and later zones stimulated with 4.055 inches OD plugs.

By reducing the OD, the HEDP is able to pass through most commonly occurred tight spots, utilising ultra-elongation dissolvable material for slips, providing a more reliable anchoring effect, reducing the risk of skidding, and maintaining desired stimulating pressure for maximum fracture network growth. Displacement and fluid volume are reduced with pump ring, whereas the pump ring is installed on the setting sleeve instead of on the plug, minimising materials left downhole awaiting to dissolve or to be drilled out. 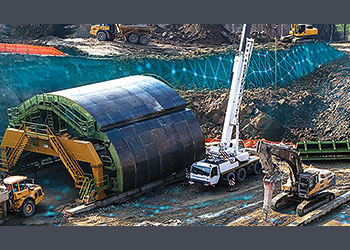 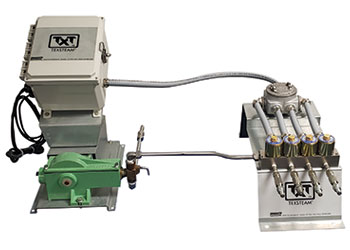 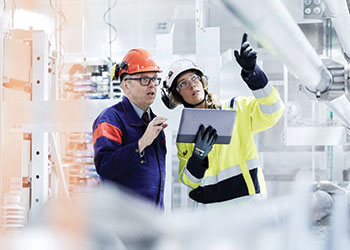 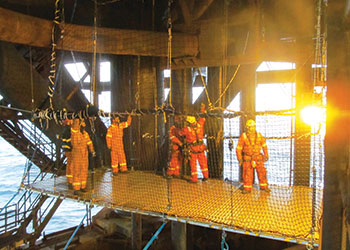 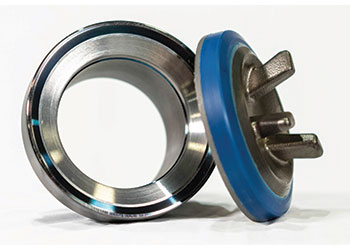