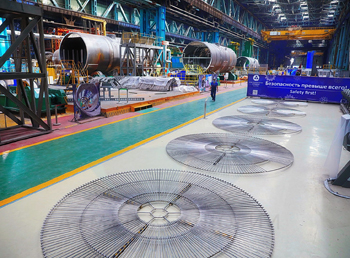 The semi vessels being assembled for Akkuyu NPP in Turkey

The production of the first steam generator for Akkuyu NPP’s second power unit is complete, while six semi vessels of the passive core flooding system tanks have been assembled for the first unit

Atommash, a leading Russian company in the field of power engineering and part of state-owned Rosatom, is busy manufacturing and assembling key units for Turkey’s first nuclear power plant, the Akkuyu NPP.

Akkuyu NPP is the world's first nuclear power plant built on the build-own-operate (BOO) model. It will have four Russian VVER reactors of generation ‘3+’ with increased safety and improved technical and economic characteristics. The capacity of each power unit of NPP will be 1200 MW. The design and construction of the project is being done by Rosatom’s Engineering Division.

The steam generator, a heat-exchange apparatus, is part of the reactor facility and belongs to the items of the first safety class. The diameter of the apparatus is more than 4 m, and it has a length of about 15 m and weight of 340 tonnes. Each power unit of NPP will have four steam generators.

The heat exchanger will be further put to hydraulic and vacuum tests, as explained by a spokesman for Atommash.

During the tests, the first steam generator for Akkuyu NPP has confirmed the strength and density of the base metal and welds of the elements of steam generator with supports.

Meanwhile, Atommash has also assembled six semi vessels of the passive core flooding system tanks for the Akkuyu NPP’s first unit. It will manufacture the tanks for the first and third units.

Each passive core flooding system tank weights 77 tonnes, and has a height of 10.5 m and 4.24 m of diameter. The unit will have a total of eight hydraulic tanks with a volume of 120 cu m.

According to a Atommash spokesman, the 60-mm-thick stainless steel shells were assembled into semi-vessels and the circumferential welds were welded.

"Each tank will have grid decking, which is a prefabricated welded structure of 4 m diameter and 495 kg mass from a round bar. The grid deckings are placed in the form of a three-level jig for the safe movement of service personnel inside the tanks," he says.

"During operation at NPP, an aqueous boron acid solution heated to 60 deg Celsius will be stored in the tanks. When the pressure in the primary circuit drops below a certain level, the liquid is automatically supplied to the reactor and the core is cooled," he adds. 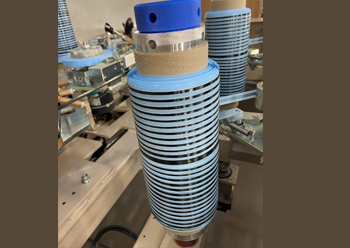