Ports have key role in lowering emissions across supply chain

With increasing pressure for the shipping and logistics industries to implement low or net-zero carbon operations, ports are emerging as key facilitators of the drive to sustainability.

It is estimated that transport contributes to 24 per cent of global CO2 emissions and that shipping accounts for 10 per cent of total transport emissions.

Many key global ports operate in or close to highly populated urban centres, with ports in such locations coming under increasing pressure to improve their overall environmental performance.

Following the Greenhouse Gas Protocol international accounting tool, examples of the sources of emissions which ports can target, can be summarised as follows:

• Scope 1 emissions: Direct emissions from sources controlled by the port such as diesel-powered shore side infrastructure for moving containers, cranes and harbour craft.

• Scope 2 emissions: Indirect emissions resulting from a port’s energy use and purchase of energy. Examples include emissions from electricity consumption used to power port buildings and lighting, reefer container points, and electric cranes.

• Scope 3 emissions: Indirect emissions resulting from users of the ports. This could potentially be very large, including emissions from vessels, trucks and railcars that call at the port to deliver and load cargo, and warehouses which are owned and operated by third parties on port land.

PORTS AS A CATALYST

Regulators have highlighted the catalysing role that ports can play in facilitating the transition to net zero maritime transport. For example, in May 2021, the European Commission announced its new approach to establishing a sustainable 'blue economy', which described the future of European ports as follows:

'…their future lies in developing their key role as energy hubs (for integrated electricity, hydrogen and other renewable and low-carbon fuels systems), for the circular economy (for collecting, transhipping and disposing of waste from ships and other port industries, and for decommissioning ships), for communication (for submarine cables), and for industry (as industrial clusters). A further aspect that helps achieve decarbonisation and zero pollution is the use of smart digital solutions and autonomous systems, as these optimise traffic flows and cargo handling in and around ports…'

In an earlier communication in 2020, the European Commission also promoted the growth of short sea shipping and use of inland waterways as a means of greening freight transport, in line with the European Green Deal objective of reducing emissions from transport by 90 per cent by 2050.

The IMO’s Initial Strategy for the reduction of emissions from shipping encouraged ports to contribute to the realisation of the strategy’s goals by providing shore-side power from renewable sources, infrastructure for the supply of low and zero carbon fuels and to further optimise the logistics chain and its planning.

This was followed in 2019 by a further call for member states to encourage 'the consideration and adoption by ports within their jurisdiction, of regulatory, technical, operational, and economic actions to facilitate the reduction of GHG emissions from ships', expanding the list of possible actions to include the use of incentives promoting sustainable low-carbon and zero-carbon shipping and support for the optimization of port calls.

HOW HAVE PORTS RESPONDED?

Global ports are taking the initiative and responding to the climate change fight in multiple ways.

Taking Singapore as an example, the Port of Singapore Authority (PSA) has set ambitious targets to reduce absolute Scope 1 and Scope 2 carbon emissions by 50 per cent by 2030 and by 75 per cent by 2040, from 2019 levels.

Digitalisation is a key part of PSA’s strategy, enabling better allocation of resources and improving efficiencies such as reducing waiting and idling times for vessels and trucks by scheduling 'just in time' berthing and container pick up and drop off.

The new port at Tuas, scheduled to be fully operational in the 2040s, will have green operations by design. The port will be fully automated, terminal equipment will be electric, and operations will be consolidated meaning a reduction in inter-terminal road haulage between the current Brani and Pasir Panjang Terminals.

As the world’s largest bunkering port, Singapore is also carrying out tests and studies on alternative fuels, following successful tests for LNG bunkering earlier this year.

The HPA uses its regulatory power to incentivise port users to adopt carbon-reduction strategies. For example, it provides discounts on port dues to vessels which meet its environmental criteria and to locomotives equipped with black carbon filters.

Terminal operators in Hamburg have also taken measures to meet their own emissions targets. Container cranes have been electrified, and truck trailers and straddle carriers are to follow.

The terminals use green electricity, partly from solar and wind power, and have replaced existing lighting with LEDs.

Yard operations have also been optimised to ensure efficient container storage and cargo handling has been enhanced through the use of dual cycling to load and unload containers simultaneously.

The following themes are emerging from the various decarbonisation activities being undertaken by ports, and being encouraged by regulators:

• Ports have an important role to play as decarbonisation hubs. This can take many forms, such as supply of alternative fuels, providing access to green shore power, increasing operational efficiencies, and generating and using clean energy.

• However, ports cannot achieve meaningful reductions in carbon emissions without cooperation from other entities in the wider port ecosystem. A collaborative approach is required with harmonised approaches from port authorities, terminal concessionaires, and port users.

• Technology and innovation are key enablers of decarbonisation. Electrification of port infrastructure is now widespread and likely to gain pace as battery technology advances.

• Digitalisation and better collection and use of data can significantly enhance decarbonisation efforts by providing ways of monitoring and calculating emissions across the supply chain, providing better visibility of cargo movements, enabling just in time berthing and truck arrival and allowing for better operational planning.

• A revival of intermodal solutions as a means of providing lower emission transport solutions, gives a renewed focus on improving intermodal connections and transitions, and opens new opportunities for smaller, urban ports with access to inland waterways.

• Mitigation of the effects of climate change and adaptation to ensure port resilience in the face of increased risks of more severe and frequent adverse weather events does not seem to be high on the agenda.

• There seems to be more scope for port authorities to leverage their regulatory power to encourage change, for example, by providing incentives and disincentives in the form of discounted port dues for port users who meet environmental standards or increased port dues for those who fail to meet the standards; insisting that environmental commitments be included in terminal concession contracts which can then be mirrored in the contracts between the terminals and the shipping lines; and systematically measuring and reporting emissions from all port users on a regular basis.

Ports are, therefore, uniquely placed to assess the opportunities for lowering emissions across the maritime supply chain, and to encourage stakeholders to adopt net zero strategies.

*Joanne Waters is Senior Associate at HFW Consulting’s Singapore office, and Sian Knight is Professional Support Lawyer in Hong Kong. The firm has over 600 lawyers working in offices across the Americas, Europe, the Middle East and Asia Pacific, supporting clients across core sectors, including aerospace; commodities; construction; energy; insurance and shipping. It has a team of specialist lawyers advising on the acquisition, disposal, development and operation of ports and terminals. 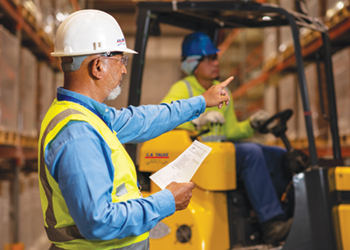 Ports have key role in lowering emissions across supply chain