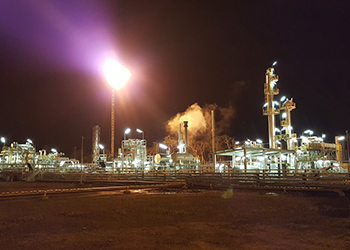 Problem solving is in the very fibre of Perenco

In a world-first, Perenco rolled out an FLNG built from a converted ship, creating a more adaptable way to retrieve gas from stranded gas reserves, and deployed an ICSS to bring greater control, safety and scalability without costly transition

Engineering is the art of applied ingenuity. Its practitioners take large-scale problems and find creative ways of solving them. Some of the greatest engineering feats in history started as seemingly insurmountable challenges that, once overcome, released tremendous, ongoing value.

In the oil and gas industry, tackling the big problems is where market share is won. Firms that identify the challenge and take the risk of solving it are rewarded with a lasting competitive advantage. Problem-solving is in the very fibre of Anglo-French natural resources firm Perenco. Working on oil and gas projects across Africa, Asia and the Americas, the firm has thrived on bringing lucrative new business models to market.

One manifestation of its ambition is its Sanaga gas production operation, which fuels the Kribi power station in south-west Cameroon. Rather than constructing a fixed gas well from scratch — a process that can take many years to complete — Perenco decided in 2015 to allow the roll out of the world’s-first example of a floating liquidation vessel (FLNG) built from a converted ship. Named the Hilli Episeyo, the ship not only shaved years off the commissioning process, but has created a more adaptable way to retrieve gas from stranded gas reserves, in compliance with national legislation.

Operating the pioneering FLNG vessel requires industrial processes and safety to be controlled from a distributed set of command centres. The CPF is an essential component in coordinating the gas production supply chain.

Its previous distributed control system (DCS) was beset by a number of challenges. Firstly, the process and safety elements were misaligned, bringing operational inefficiencies. Secondly, the lack of diagnostic information meant that trained staff were required onsite to identify and address issues. Thirdly, the platform lacked the scalability to expand capacity, which was coming under pressure as operations in the Sanaga gas field grew.

The challenges were evident during a particular incident. A network issue was identified at a late stage, requiring specialist engineers to be brought to the site. Resolving the problem meant a week of downtime and sizable costs, highlighting the urgent need for a greater degree of systems autonomy and faster turnaround in resolving issues.

This left Perenco with a choice: either upgrade the existing system or replace it entirely. Following deep analysis, the company decided to transition from the DCS to an integrated control and safety system (ICSS) connected to Perenco’s centralised data operations, and to remote access points in Douala and Paris, Perenco’s local and central HQ respectively.

These new requirements led to Perenco awarding the contract to ITEC Engineering, who brought in Rockwell Automation to help cover the full scope of the project — from electrical and instrumentation, through to integration of the plant ICSS.

The conversation about the Bipaga project started in 2017 with an exploration of costs. Replacing the existing system wouldn’t be cheap. To detail the cost benefits, ITEC Engineering showed Perenco that while the ICSS would require upfront investment, day-to-day running costs would be far less expensive than those of its existing platform. The total cost of ownership (TCO) argument was extremely compelling.

The cost discussion had another dimension. Transitioning from Bipaga’s previous platform to an entirely new system would have to be done within a tight timeframe. The new platform had to be commissioned within a year, or else Perenco would incur significant costs — amounting to hundreds of thousands of dollars — for every day that the system was not operational.

An ambitious but achievable roadmap within the timeline was created. ITEC Engineering was responsible for specifications, engineering design and automation processes, while Rockwell Automation provided its PlantPAx distributed control system (incorporating SIS, PCS and HIPPS), along with the connectivity, via EtherNet/IP, to enable remote access to the FLNG from Perenco’s Douala and Paris control rooms. Together, the companies were able to identify efficiencies and potential issues.

ITEC Engineering also built a mobile application for Perenco, allowing senior personnel to check diagnostic activity via tablet, further reducing the requirement for on-site operational management. The components of PlantPAx were pre-packaged, enabling all infrastructure to be integrated into a global application, thus saving huge volumes of time and engineering costs. By the time of the go-live date, Perenco was able to ‘turn the key’ and activate all components in sequence.

Not only was the tight delivery date for testing and implementation met, it was actually exceeded on both time and cost.

One year on from the implementation, Perenco has already realised some important benefits that justify the decision to transition from its original DCS. These include:

• Improved integration capabilities: Perenco now has an efficient ICSS that brings together all process and safety systems into a single architecture. This is hugely beneficial for those working at the Bipaga facility, both on-site and from remote locations, as it creates a more seamless user experience. It’s also a benefit for the broader organisation, as Perenco is using Rockwell Automation’s technology across multiple plants, and so can ask suppliers to standardise on Rockwell Automation.

• Better diagnostics: The open nature of Rockwell Automation’s technology means that Perenco’s IT staff have a greatly improved ability to monitor the performance of process and safety systems at the CPF, and greater agility in reacting to issues without the requirement for on-site engineering. Rockwell Automation and ITEC Engineering intentionally included Perenco’s IT team in setting the parameters around the systems to ensure the highest level of compliance from an IT security perspective.

• Greater simplicity: Rockwell Automation’s ICSS is much more straightforward for Perenco to maintain and upgrade. Perenco now finds it easier to train staff to use its systems and can adapt processes without creating new complications.

Perenco’s experience has been so positive that, one year after implementing PlantPAx, it has decided to replace its DCS entirely and have one fully integrated system across all its operations. A key factor in this decision has been its relationship with ITEC Engineering and our own practitioners. Together, we have used our knowledge of the business to deliver a superior solution, enabling Perenco to move faster, continue tackling the big problems and gain an advantage that promises to deliver value for the Sanaga operation well into the future.