The potential of green corrosion inhibitors for oil pipelines 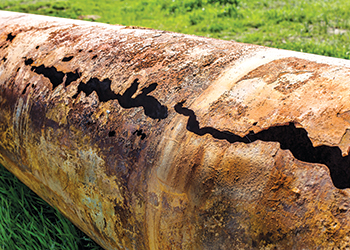 Corrosion can lead to environmental hazards and economic losses

A group of researchers at the University of Zagreb in Croatia have found plant extracts to inhibit corrosion in carbon steel.

Katarina Zbulj, Gordana Bilic, Lidia Hrncevic, and Katarina Simon from the university’s Faculty of Mining, Geology and Petroleum Engineering, showed in their preliminary published research a significant decrease of corrosion rate in the cases of some plant extracts in a simulated brine solution saturated with CO2.

Meanwhile, during hydrocarbon production, brine and other impurities (dissolved gasses, sand, additives applied during production, etc) are also produced as byproducts. And with time as the production field matures, the share of the produced brine increases as well.

The produced fluid, among other things, can also contain carbon dioxide (CO2) and hydrogen sulphide (H2S), which when dissolved in water (brine) cause corrosion and damage to the equipment.

Corrosion can have great consequences in the petroleum industry, including environmental (oil spill) and equipment damage followed by mechanical failure and operational causes.

According to data from Conservation of Clean Air and Water in Europe (Concawe), there were nine spill incidents during the five-year period from 2015–2019, and due to corrosion.

Globally, the annual cost of corrosion is a staggering a$2.5 trillion (3.4 per cent of the global GDP).

One of the ways to control corrosion is with the application of corrosion inhibitors.

Due to the maturity of the production fields and the obsolescence of the infrastructure, corrosion is one of the major issues in the Croatian petroleum industry.

The parts that are most exposed to corrosive fluid are the flowlines that transport the untreated oil and the pipelines for extracted brine transport.

Here too corrosion was the main cause of pipeline leaks with an approximate share of 71 per cent in total number of leaks. Data further indicated the highest frequency of leaks to occur in flowlines.

The corrosion protection of these pipelines is usually done with the application of conventional organic corrosion inhibitors, which, due to their toxicity, have environmental limitations.

Alternatively, so-called green inhibitors, which can be equally effective as conventional inhibitors, are being tested. Additionally, these are biodegradable and affordable.

Due to their non-toxicity and biodegradability, the green corrosion inhibitors are environmentally acceptable.

And while most research on these plants was conducted in an acidic corrosion medium, the experiments in this paper were done in a simulated brine solution saturated with CO2.

The extracts were selected based on their chemical composition, more specifically the active components they contain (flavonoids, saponins, polyphenols), which represent potential adsorption centres in adsorption on a metal surface.

The carbon steel sample used in the study was a steel sample that flowlines and brine pipelines are composed of.

And the brine used was prepared as a solution of sodium chloride (NaCl), sodium bicarbonate (NaHCO3) and calcium carbonate (CaCO3).

Potentiodynamic polarisation by Tafel extrapolation was performed to examine the inhibitory activity and determine the concentrations of the extracts at which they showed the highest effectiveness.

The highest corrosion inhibition efficiency of each plant extract is shown in Figure 1. And a list of the plant extracts with corresponding concentrations at which the highest inhibitor efficiency (IE) is achieved is given in Table 1.

To get a better insight in the behaviour and adsorption of the chosen plant extracts as corrosion inhibitors on a metal surface, further electrochemical and surface analysis research will be conducted in dynamic conditions.

If future studies confirm their effectiveness, these extracts could be successfully applied in the protection of carbon steel in hydrocarbon production and transportation systems in Croatia.

The potential of green corrosion inhibitors for oil pipelines