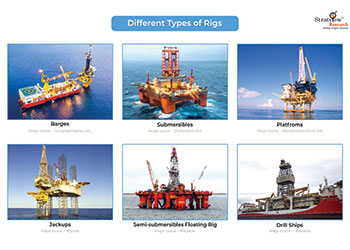 The categories of rig types

Oil, natural gas, and coal are the conventional energy sources that have been empowering the growth and development of the world for 150 years.

According to Environmental and Energy Study Institute (EESI), in 2020, fossil fuels constituted 80 per cent of the global energy supply, with oil making up 30 per cent of that figure.

Multiple major economies are looking for new oil resources, both onshore and offshore, and increasing production from their existing ones.

For the resources present in water, offshore drilling rigs carry out pumping activities around the clock.

These rigs are the most crucial part of the equation. They house people, provide a platform to safely conduct operations, and help the economies flourish with an uninhibited supply of crude oil.

They have been successfully carrying out operations since the first offshore oil rig started in 1947 in the Gulf of Mexico. The increase in the number of the offshore rigs is palpable as seen from the last five year data in Figure 1.

It shows offshore rigs have seen a continuous growth barring the year 2020, when its growth dropped suddenly. This was due to the Covid-19 pandemic and its adverse effects on oil and gas industry. Then in 2021, the growth in rigs again started witnessed an uptick.

According to Stratview Research, offshore drilling rigs are expected to grow at a CAGR of 9.1 per cent till 2015.

These offshore rigs fulfill 30 per cent of the global crude oil demand, making them a significant investment opportunity for countries around the world.

Meanwhile, the technologies employed in the industry are continuously being researched upon and innovations are part of daily life.

Based on the type of operations, offshore drilling rigs are divided into two major categories:

This is a type of mobile offshore drilling unit with some part in contact with the seafloor while drilling and other parts floating above. It can be moved from one drilling site to another since it is capable of floating. The drilling operation it carries out is very similar to that done by onshore rigs. It also has blow-out preventers (BOPs) located above sea level, where it can be accessible from the supporting structure.

Bottom supported drilling rigs are further classified into four types based on operations:

• Barges: A barge or a drilling barge is designed to work in shallow waters, less than 20 ft to be precise. They are floating platforms that are towed from one place to other behind tugboats. Its lower hull rests on the seafloor and its large surface area makes it impossible to sink, meanwhile giving it stability to carry out its drilling operations. They are common in the Gulf of Mexico.

• Submersibles: Submersibles are nothing but barges that can work in waters deeper than 20 ft but lesser than 50-70 ft. They are built with multiple columns or posts, which allow the rig to raise its upper hull above water. These columns are also called pontoons and provide buoyancy to the rig, allowing it to be floated around.

• Platforms: Platforms are built on a jacket. They are tubular steel frameworks that attach the rig permanently to the ocean bottom. This framework provides support to the rig during operation and houses its crew and production equipment. Platforms can drill in many directions from their base within their range. They are classified into two more types based on their drilling depth capability and structure.

• Fixed platforms: They are fixed with strong concrete or steel structures and are intended to be permanent structures. Most of them are situated on the continental shelf and can drill up to 1,700 ft. They also house crew quarters, drilling rig, and equipment.

• Compliant towers: They are narrow and tall structures made up of steel and concrete with the primary purpose of drilling in deeper depths, from 1,500 to 4,900 ft. However, they can also reach 7,000 ft. They are meant to sway with wind and waves, and are fixed as well as floating platforms.

• Jackups: These are very similar to platforms albeit with one difference. Although they have heavy legs made up of steel and concrete, they are not permanently attached to the ocean floor. They are held in place with their weight. It gets its name due to its ability to jack up its legs while drilling, to get stability, and to jack down them when on the move. While being towed, the hull gives it the much-required buoyancy. It is generally made use of in depths of 400 ft or less.

They are further divided into two types depending upon the position of their derrick:

• Cantilevered jack-up: The derrick is mounted on an extending arm.

• Keyway or slot jack-up: The derrick is mounted on a platform, positioned over the opening it drills through.

In deep waters, it becomes impossible to attach a rig to the seafloor. Therefore, with the help of anchors or dynamic positioning systems, some rigs are kept afloat while in operation. The drilling activities of floating drilling rigs differ from the onshore and bottom-supported drilling activities as they are affected by strong winds, and tidal waves and currents. Also, safety equipment such as BOP are placed on the seabed and are not accessible from the structure.

• Semi-submersible rigs: When oil is to be pumped from a depth of more than 5,000 ft and less than 12,000 ft, semi-submersible rigs come in handy. These are triangular, rectangular, or pentangular in design with the vast majority of their mass under the surface of the water, which helps in stabilising the rig and minimising the wave motion at its centre where the drill is located.

They are also divided into two types; sea star platforms and spar platforms.

• Drill ships: These ships are used for exploration of oil and gas reserves, and the drilling and capping of new wells. They have a ‘moon pool’, which is an opening in the middle part of the ships where the drilling equipment is located. They use mooring or dynamic positioning systems to make themselves stabilised and initiate the drilling.

Drilling ships are capable of operating in depths of 3,000 m of water. Also, they are turned into the oncoming winds or currents for better stability of the vessel compared to other offshore drilling platforms.

Offshore drilling has not only been immensely profitable for producers but have brought in prosperity to their massive role in crude oil growth. Therefore, the market grew at an amazing pace in the past. However, with certain global events, the market as encountered some challenges:

• Environmental impact and climate change: Offshore drilling projects have been associated with oil spills, marine pollution, and the deaths of marine animals. In addition, oil is considered as the main cause of global warming. These challenges pose grave risks to the projects and are pushing several countries to invest in the usage of cleaner fuels.

• Focus on renewables: Renewable energy sources such as wind energy, tidal energy, and solar energy are being invested into heavily to substitute conventional resources such as fossil fuels.

According to the International Energy Agency (IEA), the global oil demand will increase from 99.7 million barrels per day (bpd) in 2022 to 101.8 million bpd in 2023. This is despite global efforts to substitute fossil fuels with renewables.

The demand is increasing due to the growth that countries like India, China, and several other Asian countries are witnessing.

The only thing that remains is to reduce the impact offshore drilling has on the marine environment.

Oil and gas companies are taking steps and finding ways to reduce methane leaks that harm the environment. Recent figures from the IEA have outlined that it is financially possible to reduce oil and gas methane emissions utilising currently available and emerging technologies.

In addition, oil and gas companies are also creating ‘digital oilfields’, which will help them monitor data and information from the units and take better sustainable decisions.

These are some initiatives that oil and gas companies are taking to improve sustainability and this certainly highlights the way ahead for the sector.

Offshore drilling will benefit from these efforts, and will allow offshore rigs to continue drilling in a sustainable manner.