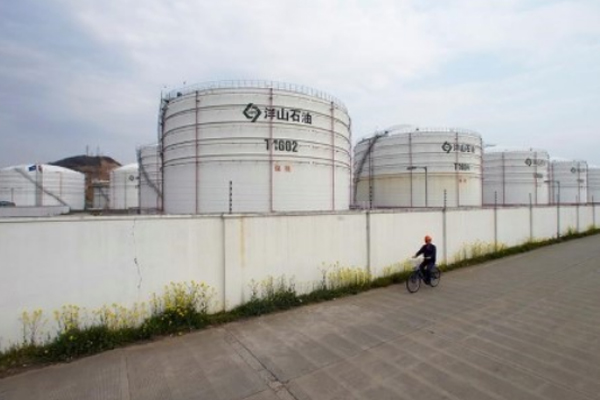 China's first crude oil reserve auction could have an outsized impact on market sentiment, signalling the top oil importer remains committed to reining in inflation by controlling commodity prices, analysts and trading executives said.
The initial sale from its strategic petroleum reserves (SPR) will be small - 7.38 million barrels, or about a half-day's usage in China - barely registering in a global market that consumes nearly 100 million barrels every day.
Even so, it demonstrates Beijing is prepared to sell off stockpiles that have previously been considered off limits, and that it intends to become more active in domestic oil markets whenever high prices threaten to undermine the economy.
"With the kind of market power China has, the release has huge symbolic significance as the first SPR public sale, as just about three years ago the debate was still about how China's SPR functions and how it will be regulated," said Michal Meidan, director for China at the Oxford Institute of Energy Studies.
China, the world's second-largest oil refiner and a major consumer of most other commodities, has also held sales from the strategic reserves of metals, coal and corn to help tame factory inflation that hit a 13-year high in August.
"I see it very much a test, both in terms of internal mechanism and the impact on market ... for containing inflation and ... learning how to use the SPR like the US does," Meidan said.
Other market watchers said the timing of the sale - just as global oil prices hover near $75 a barrel, up roughly 40 per cent this year - indicates Beijing hopes to guide oil costs lower.
"The Chinese have the most power to do that now because they are the No. 1 importer of crude oil," said Tony Nunan, senior risk manager at Mitsubishi Corp.
"It's a new era. It seems like they are openly advertising this (sale) because of the fear of inflation."
TEST DRIVE
Next week's auction from reserve tanks in Dalian in China's northeast will mark the first public sale from the country's strategic petroleum reserves since it started pumping oil into reserve tanks 15 years ago.
Managed by the National Petroleum Reserve Office, the sale will be conducted over a newly established electronic system called the National Oil Reserve Centre platform, which has a website detailing trading rules and the risk parameters for participants.
The government has said it will release reserves in phases and regularly rotate its oil reserves. The National Food and Strategic Reserves Administration, which oversees the petroleum reserves office, did not reply to a request for more details.
China has closely guarded information about the size of its reserves, leading to a wide range of estimates of how much its reserve tanks hold, from 220 million to 384 million barrels, or between 16 and 27 days of refinery throughput.
The lack of specifics has left traders and analysts guessing as to how many more releases are likely, and led to speculation that between 20 million and 50 million barrels could be released by mid-2022.
"These sales popped up so suddenly, caught all by surprise," said a trader at a Chinese refiner.
"Also I wonder how many batches there will be." --Reuters
Share