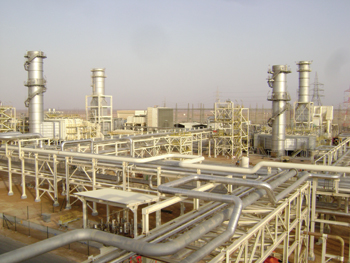 OMAN is not noted for oil fields that are large or easy to exploit. Yet, over the past six years, it has reversed a declining oil production trend. In the process, it has won recognition as the regional leader in development of unconventional oil and gas resources.

Among the fields, Nimr, and oil and gas field in the south found in 1980, produces 21[degrees] API oil from a Devonian Fm. A group of connected fields found later, including West Nimr, raised this system’s output to 180,000 bpd. But since late 1997 they have declined and now their output is averaging 110,000 bpd. Their oil is heavy with high viscosity, as in the case of the Rima/Jalmud group.

PDO in May 2011 gave the local Galfar Engineering and Contracting a $96 million job to develop the Nimr-G and Karim West oilfields. The company was to build water-flooding facilities for both within three years.

Nimr oil comes out of 1.2 mbpd of water. This and other groups of PDO fields have a down-hole oil-water system which separates the water from the oil in the well through a hydroclone. In early 2008, Al Hassan Engineering got a $65 million job to drill 89 water production wells and 19 injection wells by 2010. Nimr had a gas compressor station contracted in 2009 and a sewage treatment system to pump effluent water from the well-head used to grow biofuel crops in the desert. PDO has opted for the contractor to use “desert greening” technology there. The treated water is used for irrigation.

A biological solution was preferred to mechanical treatment as it was more environmentally friendly and did not require expensive gas feedstock. The system takes 45,000 cmd of water from the field, treats it and uses it to grow the crops for biodiesel production. It is the first time such a project has been launched in the Middle East. The treatment and disposal of water is a major issue for PDO. At some of its mature fields, PDO produces five barrels of water for every barrel of oil, compared with the industry standard of three to one.

The Nimr-Karim cluster of 18 small fields in the south have been developed by Medco Energy of Indonesia under a PDO service contract (SC) won in January 2005. The fields then were producing about 18,000 bpd of crude oil. PDO on January 24, 2005, said: “The contract was awarded on the basis of a highly competitive tender in which suitable companies from Oman and across the globe participated”.

The final SC was signed in March 2006. A new firm was then floated by MedcoEnergi and the state-owned Oman Oil Co (OOC) to execute the SC. OOC has 25 per cent in the new firm. Medco has maintained production at 18,000 bpd, preventing its decline as some of the fields began to decline in mid-2005. Medco has been committed to raise the fields’ production level to reach around 35,000 bpd in later in 2014 or in early 2015.

A fractured field, Fahud has Lower and Middle Cretaceous Fms. The field’s area includes West Fahud to the north-west and its oil is of 32-33.6[degrees] API with 1.4-1.8 per cent sulphur.

Lekhwair, in the north found in 1968, is one of PDO’s largest fields with its oils mostly of 37.8[degrees] API from Lower Cretaceous Fms. The field’s development was completed in mid-1993, raising its capacity to 90,000 bpd, from about 26,000 bpd. But its current output is much lower. Lekhwair produces non-associated gas from a Shu’aiba Fm, which supplies the national grid with about 1.5 mcmd. The rest of its gas output is used for re-injection. Together, Fahud and Lekhwair this year is expected to produce 100,000 bpd.

PDO in September 2011 gave India’s Larsen & Toubro (L&T) a $150 million EPC contract for a gas treatment plant at Lekhwair. This has involved construction of a single train gas plant sending treated gas to a gas plant at Yibal and condensate and water to the Lekhwair production system. The work also includes construction of a gas de-sulphurisation and gas dehydration units, with utilities, a remote mani-fold station and liquid and gas export pipelines.

Yibal, once the largest oilfield in Oman found in 1962, in 2014 is expected to produce 110,000 bpd of 38-40[degrees] API oil, from 135,000 bpd in early 2004 and 170,000 bpd in 1997. Yibal, Shell’s first discovery in Oman, also produces most of the country’s needs of natural gas. The field has Lower and Middle Cretaceous Fms at depths of 8,465 ft. An expansion of Yibal to 200,000 bpd, from 120,000 bpd, was started in 1991 and completed in 1995. Yibal includes several satellite oil and gas fields found in recent years. Together with Yibal, these form a single geological structure with the Shu’aiba Fm being the main feature. Most of Yibal expansions have involved the second phase of the Shu’aiba Fm’s development, tapping newly found reserves. Yibal has four gathering stations.

Yibal has two major reservoirs of non-associated gas deep beneath the oil Fms. From this most of Oman’s gas is produced from two reservoirs: Natih, which is supplying most of the gas being fed to the Government Gas System (GGS); and Shu’aiba, which provides the GGS with about 1 mcmd. Yibal also provides most of the gas PDO re-injects into its oilfields. The other major gas producers feeding this system is Lekhwair. Yibal has a 16.5 mcmd gas processing plant and LPG units.

PDO’s down-hole oil-water separation system through a hydroclone was tried successfully at Yibal in 2001. The oil reaches the surface, while the water is re-injected into the reservoir. The system achieves significantly higher oil production than a gas lift.

Marmul/Athel: Marmul, part of the southern trend, was found in 1956 as the first oil discovery in Oman. It was found by Cities Service Co. and Richfield Oil of the US, which later left the area to PDO. Athel found by PDO shares a production system with Marmul, with a total output in 2014 expected to average 75,000 bpd.

Saih Nihayda, found in 1972 in central Oman, is a small field producing 39.6[degrees] API oil from a Permian Fm. But this has huge reserves of non-associated gas developed for LNG export, together with the major non-associated gas reserves of Saih Rawl and Barik. Saih Nihayda’s oil output averages less than 5,000 bpd, compared to over 15,000 bpd in the 1990s. In 1998, PDO added to the oil stream small Saih Nihayda extensions with their proven reserves then put at 5 million barrels. Saih Nihayda also produces condensate from the field’s gas reservoir.

PDO in late 2009 gave a $250 million EPC job for the field’s massive gas compression unit to GS Engineering & Construction of South Korea for output to rise from 20 mcmd to 25 mcfd for several years beyond its forecast 2015 start of decline. The gas reservoir has been producing since it was commissioned in early 2005.

Growth of up to 70,000-80,000 bpd is expected from five clusters, such as that of Rima Cluster, through various efficiency gains and EOR systems.

Mabrouk oilfield was inaugurated in early 2012 by PDO in central Oman, whose development was fast-tracked. Mabrouk has a capacity of 20,000 bpd. A group of small fields, Maurid, Maurid North-East, Wazar, Amab and Tuqaa went on stream in 1998 with a combined capacity of 4,560 bpd and total proven reserves of over 18.4 million barrels. But their output has since fallen considerably. 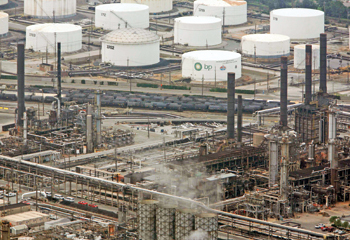 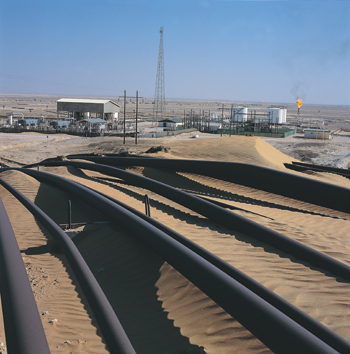 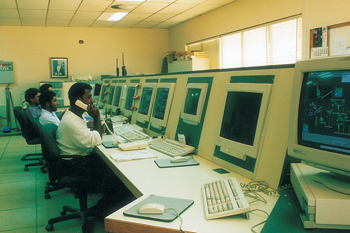 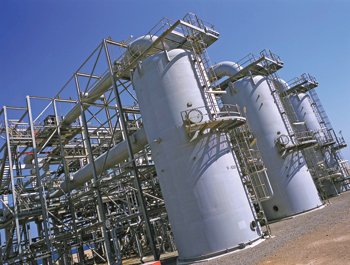 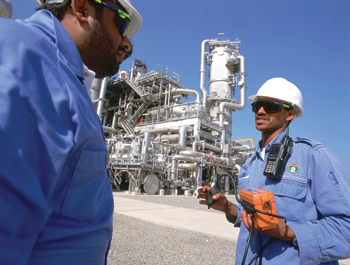 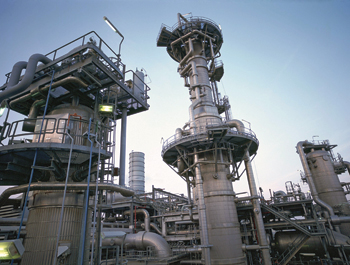 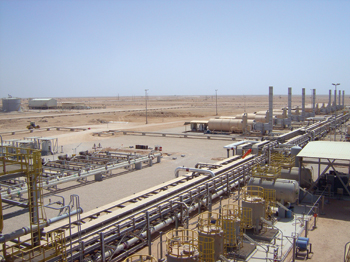 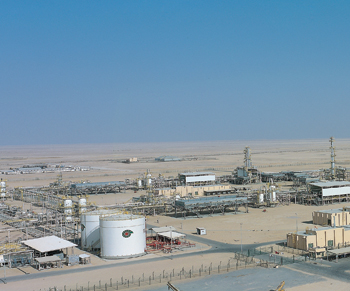 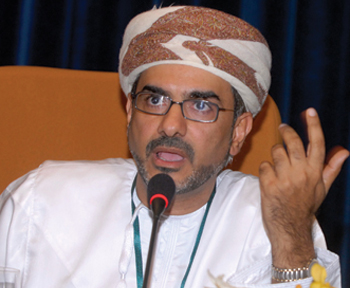 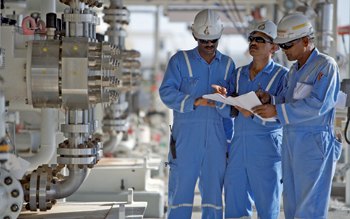