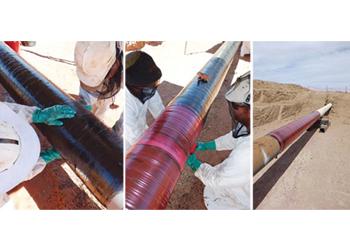 In the past, the repair of deteriorated pipework involved the welding of plates and sleeves, the use of bespoke clamps or the partial replacement of the faulty section. In recent years, however, the use of polymeric composite materials for the repair of pipes has gained worldwide support and interest.

The main reasons for this are: the composite repair can be based on engineered structural calculations in accordance with internationally recognised standards; unlike welding, it is a safe cold process that can be carried out in areas where hot work is prohibited; it can be carried out at lower cost and provide long repair life sufficient to be taken as a permanent repair.

Pipelines carrying liquids and gases operate over long distances through various landscapes, environments and conditions, pipelines and can be subject to internal and external effects from numerous factors.

These include bending, shear, torsion and fatigue, exposure to corrosion and chemical attack, etc. Leaks can also have disastrous consequences, meaning shutdowns and environmental impact.

For this reason, it is incumbent on facility owners and operators to take proactive precautions to prevent the worst from happening.

BELZONA SUPERWRAP II COMPOSITE REPAIR
Belzona SuperWrap II is a pipe repair technology based on a polymer-based composite of epoxy resin and reinforcing fibres, using a wet-wrapping technique in which the resin-impregnated reinforcing fibres are wrapped directly around the pipe defect and cured.

Two material properties are key to the development of composite materials for the repair of wall thinning and leakage defects in pipes: mechanical strength and stiffness.


In the case of polymeric composites, the mechanical strength and stiffness depend to a large extent on the properties of the reinforcing fibre.

The success of a composite repair also depends on the adhesive strength of the resin, as it must be integrated with the pipe substrate.

In the development of the Belzona SuperWrap II, several combinations of resins and reinforcing fibres were considered.

In the end, a two-component epoxy resin with 100 per cent solids content, consisting of a phenolic novolac base (main agent) and an amine solidifier, was chosen.

The main reason for this was the emphasis on the fact that epoxy resins can achieve better adhesion and mechanical strength compared to other functional polymer groups, including polyurethanes, methacrylates, alkyds, vinyls and polyesters.

The possibility of forming highly cross-linked polymer matrices, which are the basis for excellent heat and chemical resistance, should also be supplemented as one of the reasons for concluding that phenolic novolac epoxy resins are the best choice.

In general, epoxy resins are slow to cure at low temperatures, but when heat is applied, the reaction is activated and the resin cures in a shorter time.

Taking into account the temperature conditions at the time of application, which tend to be affected by climatic differences, two types of resin were initially developed (Belzona 1981 and Belzona 1982 resins), followed by Belzona 1983 resin with improved heat resistance.

The most suitable reinforcing fibre material was selected on the basis of the material's mechanical strength and stiffness, as well as its workability (cutting, resin impregnation, on-site handling, etc).

After carefully considering all the pros and cons of each material, it was decided to use a hybrid fibre, a combination of carbon fibre and glass fibre, which is produced as Belzona 9381 to be an optimised reinforcement fibre sheet for Belzona SuperWrap II.

Belzona 9381 reinforcing sheet has a two-layer construction, with carbon fibre on the front and glass fibre on the back, to maximise the benefits of both fibres and to achieve the most efficient distribution and arrangement in terms of physical properties and workability.

This is because the glass fibre and epoxy resin layer are designed to act as an insulator to prevent corrosion currents from flowing through the conductive carbon fibre.

The reinforcing fibre sheets are available in several different widths to accommodate different pipe diameters, with wider sheets being particularly useful for special geometries such as bends, tees, flanges, reducers, as well as the walls and roofs of large storage tanks.

After the resin-impregnated reinforcing fibres have been wrapped around the pipe, a special consolidating film called Belzona 9382 is used to hold the repair in place until the resin has cured. Once the resin has cured, the film can be easily removed.

COMPLIANCE WITH STANDARDS
The composite repair of pipework requires a high degree of reliability, especially in the case of high pressure piping systems or for pipes carrying hazardous media.

For this reason, rigorous third-party and in-house testing is carried out to demonstrate compliance with a series of requirements set out in ISO 24817 and ASME PCC-2.

For the tests aimed at assessing the mechanical properties of the materials, plate specimens made of reinforcing fibre and each resin were used.

REQUIREMENTS FOR BELZONA SUPERWRAP II APPLICATION
The repair design of Belzona SuperWrap II is determined by strength calculations based on actual defective conditions of pipes in accordance with the ISO/ASME standards, which also take into account factors such as surface preparation method, pipe geometry, environmental conditions, operational/design pressures, etc.

The repair is then carried out following the design, but there are certain conditions that must be adhered to during the application.

Firstly, to ensure the quality of the work, all Belzona SuperWrap II installers are required to attend and pass a validated training course.

The course includes a practical test (as well as a theory exam), in which participants are asked to repair a pipe spool with a simulated defect, which must then pass a certain pressure test.

As a strict rule, a compliant repair must always be conducted by trained installers. The ISO/ASME standards defines repair classes from Classes 1 to 3.

All the inspection results, including environmental measurements, surface roughness achieved by surface preparation conducted, batch numbers of products used, and resulting repair thickness, are recorded in QA/QC documents of each project. And this will be collected on all projects, including information on who was the installer/supervisor involved.

After use in service, Belzona SuperWrap II repairs can be revalidated or decommissioned upon reaching its design lifetime, depending on the decision made by the asset owner.

Belzona SuperWrap II repair solution is available worldwide through the network of Belzona international distributors, and the applications can be carried out by trained and validated personnel from third parties as long as they fulfil the prerequisites.

By allowing the asset owner to choose who would carry out the design and also who would apply the wraps on-site (as long as those parties are qualified as per the standard), the operator has the flexibility to appoint the contractors best suited, depending on the specific requirements of a project.

* Yusuke Nishi is a Senior Technical Services Engineer for Belzona Asia Pacific based in Thailand. He is an experienced professional within the plant maintenance industry specialising in composite repair and protective coatings. Nishi possesses in-depth technical knowledge in various areas of polymeric solutions with a focus on corrosion management and problem solving, gained from over 10 years of experience at Belzona. 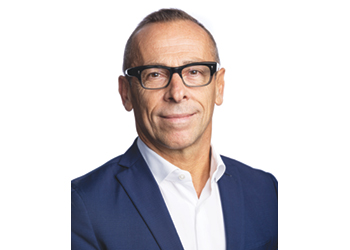