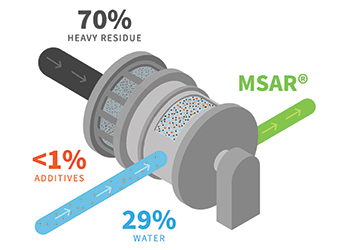 The production of fuel oil is expensive. In a typical semi complex refinery that produces fuel oil, the very thick residue streams that come out of the bottom of the process units would be solid at room temperature and so are not suitable to sell as fuel without further processing.

The distillate products that come out of the top of the process units are the valuable transportation fuels such as jet, diesel and gasoline, which sell at a significant premium to the crude oil being refined.

In order to enable the thick viscous residue streams to be sold as fuel oil, they must be diluted or cut with some of the valuable distillate products. The fuel oil is sold at a discount to the crude oil processed, resulting in a significant reduction in the yield of premium products and associated revenues for the refiners. Around 10-20 per cent of the valuable distillates are downgraded or lost by the refinery and are not sold at a premium, but at a discount.

The common solution to this issue is to upgrade the refinery to get more value out of the bottom, or heavy part of each barrel refined. This is undertaken by much more intensive processing of the oil in new process units, which break down the heavier parts of the crude – creating more valuable distillate products and either lower quantities of very thick residues (which need even more distillate to dilute them to enable their use as fuels), or, in the most extreme cases, no liquid residue streams at all but a solid coke by-product.

Several such schemes are in construction or are being contemplated in the region such as Bapco’s Oil Refinery Modernisation Programme, KNPC’s Clean Fuel Project and Saudi Aramco’s Jubail and Jizan refineries. Such large multibillion-dollar projects typically take from five to seven years to implement, and can be prone to cost and timing overruns.

In the current oil price environment, capital investment in the downstream sector remains under pressure and the traditional solutions are very energy intensive and create additional CO2 emissions which further hampers the implementation of these traditional schemes.

'If producers and refiners are looking for a proven alternative solution, there is one available that can be implemented rapidly to deliver significant savings at low capital cost whilst also delivering enhanced environmental performance,' says a spokesman for UK-based Quadrise Fuels International.

He says Quadrise’s MSAR technology replaces the need to dilute heavy residues with higher value diesel, producing a high-quality synthetic fuel oil. Surprisingly, it relies on something that is commonly thought to be impossible - mixing oil and water, this creates an emulsion fuel: MSAR.

The use of water and a small amount of proprietary stabilising additives to dilute the thick residues as micron-sized oil droplets in suspension, is similar in concept to the production of water-based paints. For the heavy oil or refinery producer it frees up the valuable distillates to be sold as premium fuels, significantly increasing profits whilst creating a cheaper, cleaner fuel that uses existing fuel oil infrastructure.

'MSAR technology is founded on the experience of supplying more than 60 million tonnes of Orimulsion fuel to the baseload thermal utility market worldwide, including the cleanest modern utilities in Canada, Italy, Denmark and Singapore. With this proven foundation, MSAR technology has developed significantly and can be used to create MSAR emulsion fuels from a variety of refinery heavy residue and low-value water streams for use in power, marine and industrial applications,' says the spokesman.

MSAR technology is based on standard equipment that is used worldwide to produce asphalt emulsions for road surfacing applications, with patented additive and upgraded production technology that has been jointly developed by Quadrise with Nouryon; one of the world’s leading speciality chemicals business. Both Quadrise and Nouryon have invested heavily in the development of MSAR technology to enable its use with a very wide variety of refinery residue streams and to meet demanding end-user requirements.

The hot residue streams are fed directly into the MSAR unit, MSAR Manufacturing Unit (MMU) where it is colloidally-milled into very small droplets (around 5-10 microns in diameter) immediately mixed with treated refinery water containing a very small amount of additives. The MSAR fuel is then cooled and transferred to storage tanks.

The refinery’s existing fuel oil infrastructure can be used for the storage and transportation of MSAR alongside conventional fuels.

MSAR fuel comprises (70 per cent) heavy residue, dispersed as small droplets, in water (29 per cent) which contains a proprietary additive package (less than 1 per cent). As water is the continuous phase, this determines the viscosity of the fuel – enabling MSAR to flow at ambient temperatures, where conventional fuel oils would require heating for storage and transportation.

The low capex MSAR solution delivers the refinery with rapid increases in profitability – with typical cash payback in around a year. The users of the fuel are provided with two primary benefits – an oil-based fuel that is around 10 per cent cheaper on a unit-energy basis (that is, per GJ or BTU of energy – excluding the water) and which burns more like a gas, delivering significant reductions in emissions.

MADE FOR THE MIDEAST

As the global energy transition gains traction, the Middle East will not only need to grapple with the quantity issue pertaining to oil markets but also the quality issue in light of the current shift in demand underway from heavy to lighter, distillate products such as diesel. The Middle East’s current heavy oil reserves are estimated at 1 trillion barrels, equivalent to 28 per cent of total world reserves.

Quadrise has undertaken extensive work with global power companies, marine operators and boiler/diesel OEM’s to demonstrate that MSAR fuel can be used effectively, with limited changes to the fuel handling systems that enable online changeover to conventional fuels if required.

Quadrise has been active in the region, particularly in the Kingdom of Saudi Arabia (KSA), for over 10 years. It has formed excellent relationships with key companies in the refining and power/utility sectors in the KSA, Kuwait and Bahrain, supported by GE Steam Power.

In the KSA, Quadrise has worked with the NOC’s Power Systems Planning division for several years, to plan for and implement the use of MSAR. Whilst the fuel is proven in commercial use in large thermal boilers, a commercial-scale boiler trial project was planned in 2018 to demonstrate comprehensively to the stakeholders the effectiveness in a 400 MWe boiler based on MSAR fuel imported from Cepsa in Spain, where an MSAR production facility was installed for the successful Maersk marine trial.

Significant progress made by the teams at the NOC, the electricity utility and Quadrise would enable the project to be restarted rapidly:

• All the technical and logistical preparations were completed to initiate fuel production at the refinery for delivery to the KSA.

• All commercial agreements were in final form.

• The Boiler OEM had undertaken work to define the baseline HFO performance of the boiler against which performance on MSAR would be calibrated.

• MSAR fuel was listed as an opportunity fuel in the KSA’s long-term plan.

Quadrise has been working diligently with the Al Khafrah Holding Group since 2018 to enable a project to produce the trial MSAR fuel in the KSA that the companies believe will reduce the original trial costs by $20 million. In parallel, the utility has accepted that emulsion technology reduces fuel costs and emissions.

In Kuwait, Quadrise is working with Aleph Commodities and Hawazin Regional Trading Company (Ahmad Al-Otaibi and Faisal Al-Kharafi) to develop MSAR projects to long-term commercial agreements for the production and supply of MSAR technology.

By deploying MSAR technology to oil refineries in the region, significant value can be rapidly unlocked that has the additional benefit of improving the profitability of NOC downstream assets and of the national utilities’ oil-fired generating assets.

To provide some context for the scale of the savings, the impact of substituting the current HFO consumption of around 540,000 bpd in the KSA with MSAR today could equate to:

• Fuel cost savings to the KSA of at least 10 per cent, equating to around 0.8 billion per year based on fuels costs of $40 per barrel.

• Increased refinery margins of a similar magnitude to the above from MSAR production.

• Swift implementation at refineries and power plants at low cost, within 12 months.

• Reduced maintenance and operating costs for utilities (SEC and SWEC).

• Production of MSAR fuel and blending systems in the KSA (IKTVA employment).

• Production of MSAR additives in the KSA (IKTVA project), a $200-million investment leading to new sales of $0.8 billion per year and jobs in the petrochemical sector.

• Reduced ash emissions (by 50 per cent or more), due to more efficient fuel combustion.

• Significantly reduced ash carbon content, leading to lower disposal costs or economic recovery of valuable metals from waste by-products, including vanadium, which is needed in the KSA for the manufacture and deployment of renewable energy storage batteries.