World needs to be realistic about net zero: Vakulenko 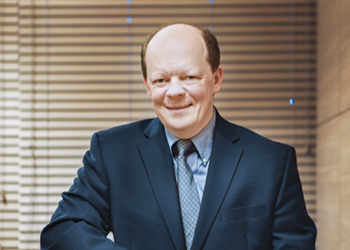 Decarbonisation at the cost of energy poverty is not going to be a palatable proposition to many,” Sergey Vakulenko, Head of Strategy and Innovations of Gazprom Neft, tells OGN

AN action plan for reducing carbon dioxide emissions by 2050 will be the central theme of the UN Climate Change Conference (COP26) in Glasgow.

Suggesting a roadmap for achieving net zero, the International Energy Agency (IEA) had earlier called for scrapping all new investments in oil and gas exploration and rely only on clean energy going forward.

“I think this is quite a radical approach,” Sergey Vakulenko, Head of Strategy and Innovations of Gazprom Neft, tells Abdulaziz Khattak of OGN.

According to him: “We do indeed need to cut carbon footprint and strive to achieve net zero, or maybe even net negative, to compensate for the past emissions; however, the world’s demand for energy is set to grow in the long term.

“And even then in the end, the new energy system — based on hydrogen, solar and wind power, as well as electric transport — would have to include some oil and gas usage. Meanwhile, in the interim decades, the role of these energy sources will be substantial and important.”

There are three sets of actors in the energy transition – consumers and voters, governments, and businesses.

And while it is for the voters and consumers to decide on the goals, it’s the job of the governments to set up and enforce policies towards the chosen goals. This would sometimes include subsidies and value transfers to mitigate market inefficiencies.

Realistically speaking certain goals may require very substantial resources. “Some of the new energy solutions may end up being very costly. Voters must have a clear understanding and make an educated decision to see if they are prepared for that cost and understand the pace at which the transition is happening,” says Vakulenko.

Energy transition and decarbonisation represent a unique challenge as this process requires a concerted effort by every country; there are externalities and temptations to freeride.

On the national level, these complications are handled via taxes, government spending, regulations and law enforcement.

However, currently there are no global institutes overseeing taxation, investment and compliance with regulation, and calls are expected for their establishment at COP26.

“However, I doubt the world is ready to set them up just yet. It would be difficult to force developing countries — which are seeking to narrow the gap in living standards with the West — to switch from fossil fuels to clean energy that they may not be able to afford.

“Even prices for traditional fuel (oil and natural gas) are peaking right now, which is becoming an issue for many of these countries,” says Vakulenko.

There is still a sizable demand for oil and gas, and this is not going to vanish overnight and has to be met.

Thus the world is still far away from reaching net zero.

Vakulenko believes whatever energy transition trajectory the world is looking at, there will still be a requirement for new oil and gas to compensate for production decline and the development of demand, particularly in the developing countries.

“Decarbonisation at the cost of energy poverty is not going to be a palatable proposition to many,” he clearly says.

Gazprom Neft is looking for opportunities to reduce CO2 emissions. It recently announced its goal to reduce carbon intensity from its production by 30 per cent by 2030.

“We are gradually shifting the mix of our portfolio towards natural gas and concentrate, which are less harmful for the environment than oil.

“We believe that even in times of energy transition there will be demand for natural gas, which although might become stagnant or decline, will not vanish for a long time. And we will strive to keep its supply available,” says Vakulenko.

Gazprom Neft is also increasing the production of hydrogen. It previously produced hydrogen for internal technological needs only but it is now making it able to offer to the market.

It will provide hydrogen to industries, which are difficult to electrify, such as steel, or as fuel for long-distance transport, such as ships and trucks, where batteries are not a practical solution.

Vakulenko says that policies towards hydrogen should be colour blind, meaning that the primary focus should be on emissions and not on the raw materials used or processes involved to produce it.

He says producing green hydrogen from renewable power and electrolysis is too costly at the moment.

“We believe in the prospects of blue hydrogen that is produced from natural gas via steam methane reforming, with carbon dioxide captured and sequestered during this process. Currently, this is by far the most attainable low-carbon mass production hydrogen.”

Among the methods in the global roadmap for achieving net zero, carbon capture and storage (CCS) appears to be the most promising one.

The world’s carbon dioxide emissions currently amount to 33 gigatons per year, and more than a quarter of these volumes (up to 10 gigatons) can be captured and stored.

This is comparable to the amount of gas and oil produced every year, and a major environmental and business opportunity for oil and gas companies.

Oil and gas companies, including Gazprom Neft, have a competitive advantage in carbon capture and storage.

Gazprom Neft operates a diverse and extensive pipeline network and it knows how to inject gas underground.

Gazprom Neft currently injects 9 bcm per annum of natural gas underground – either to boost pressure in oil reservoirs or to return gas underground until the infrastructure for its transportation is ready.

It can similarly inject CO2 essentially using the same infrastructure.

Additionally, Gazprom Neft also possess depleted fields, which can be used for storage.

At its NIS unit in Serbia, Gazprom Neft has been successfully running a full-cycle chain for capturing CO2 for five years now, transporting and injecting it underground to a depth of 2,500 m.

“Our interest in CCS was largely inspired by the first commercial project of this kind – the Al Reyadah in the Middle East – where Abu Dhabi National Oil Company (Adnoc) annually captures 800,000 tonnes of CO2 from Emirates Steel, transports it through a pipeline and ultimately injects it underground at one of its oil deposits,” Vakulenko says.

Gazprom Neft is considering similar projects, but possibly on a larger scale in Russia.

“We have offered Russian steelmakers Severstal and Evraz to capture their CO2 emissions and inject them underground at our oil and gas deposits. The business model and pricing for this have yet to be determined, but it is a necessity,” Vakulenko says.

It is clear that in some years, Russian producers of steel, fertilisers and cement will need to pay a carbon tax to the EU to be able to sell their products there.

This is part of the Carbon Border Adjustment Mechanism (CBAM) recently approved by the EU and aimed at protecting the market from competitors that do not invest in reducing carbon footprint as actively as European companies do.

CBAM will start functioning in 2023 and will be fully enforced from 2026, requiring Russian industrial companies to pay hundreds of millions of euros of carbon tax annually.

“Alternatively, these companies need to drastically reduce CO2 emissions within a few years, and Gazprom Neft is eager to help with this,” Vakulenko says.

And while in Europe quotas for CO2 emissions are sold at above $50 per tonne, in Russia, companies may spend substantially lesser per tonne to get their CO2 captured and buried underground.

“With CCS, we are essentially creating a new industry of a huge scale. Net Zero is simply not achievable without it,” Vakulenko says.

And the only people who can get this carbon back underground are oilmen, he adds. “That’s our responsibility and we know how to do it.”

“When speaking about climate change and carbon footprint, people tend to blame the oil and gas industry. But it’s time to change this attitude. Society needs to understand that we are not the problem, we are actually part of the solution,” Vakulenko concludes.

World needs to be realistic about net zero: Vakulenko