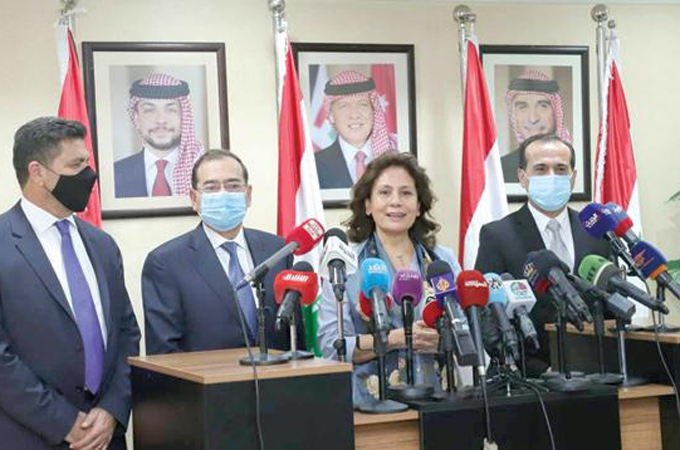 Ministers at the Amman meeting. Photo courtesy: Petra
Egyptian natural gas will be piped to Lebanon via Jordan and Syria to help boost its electricity output under a plan agreed by the four governments on Wednesday to ease a crippling power crisis.
The plan, which an Egyptian minister said would be implemented as soon as possible, is part of a US-backed effort to address Lebanon’s power shortages using Egyptian gas to be supplied via an Arab pipeline established some 20 years ago.
Life in Lebanon has been paralysed by the crisis that has deepened as supplies of imported fuel have dried up. It is part of a wider financial crisis that has sunk the Lebanese currency by 90% since 2019.
The plan is, however, complicated by US sanctions on the Syrian government of President Bashar al-Assad. Lebanese officials have called on Washington to grant an exemption. Damascus has said it is ready to cooperate.
The plan was approved by ministers from Lebanon, Jordan, Syria and Egypt at a meeting in Amman. It was attended by Lebanon's Energy Minister Raymond Ghajar, Jordan's Minister of Energy and Mineral Resources Hala Zawati, Syria's Minister of Oil and Mineral Resources Bassam Tohme and Egypt's Minister of Petroleum and Mineral Resources Tarek El Molla.
“We have put a roadmap with the ministers so that within the coming few weeks we can ensure that everything is ready so that we can after this review begin pumping gas at the earliest opportunity,” said El Molla said.
Lebanon hopes to get enough gas to generate 450 megawatts (MW) of power at a power plant in the north and is working with the World Bank to secure financing, energy minister Raymond Ghajar said.
“In future there is the possibility of importing electricity from Jordan also through Syria after repairs to areas damaged by war,” he said.
Syria would make every effort for the plan to succeed, Syrian oil minister Bassam Tohme said.
The US has said it is in talks with Egypt, Jordan and the World Bank to help find solutions to the crisis.
The Iran-backed Lebanese group Hezbollah, designated a terrorist group by the United States, has meanwhile announced that it is bringing fuel oil from Iran to ease the crisis.
The Lebanese presidency here said last month Washington had decided to help with a plan providing Egyptian gas to Jordan for generation into electricity to be transmitted to Lebanon via Syria, as well as to facilitate the transfer of natural gas to Lebanon.
The US has imposed tough sanctions here on the Syrian government. On a Beirut visit last week here, US Senator Chris Van Hollen told Reuters ways were being looked at to address the complication despite the sanctions.
Lebanon’s state-owned power company is generating minimal amounts of power, leaving businesses and households almost entirely dependent on small, privately-owned generators. Industry experts put Lebanon’s peak power demand at 3,500 MW. - Reuters
Share