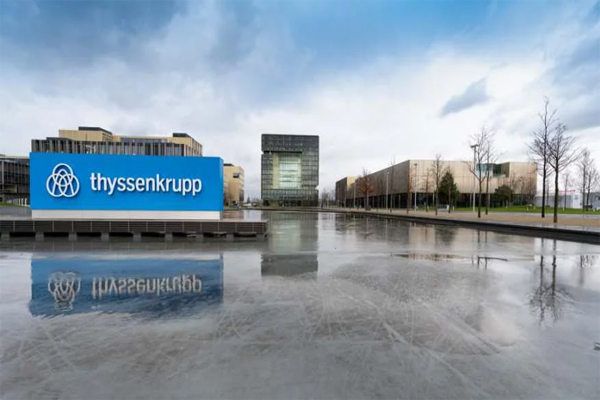 Thyssenkrupp unit Uhde Chlorine Engineers aims to rake in up to 600 million euros ($687 million) by selling new shares in a possible initial public offering this year, betting on the booming hydrogen sector it supplies with equipment.
This would correspond to a stake of roughly 10-20 per cent based on a valuation range of 3 billion to 6 billion euros that analysts have put on the division, which is being rebranded Thyssenkrupp Nucera and could be listed on the stock exchange in spring.
The 500 million-600 million euros in potential proceeds from new shares does not factor in the sale of existing stakes by current owners Thyssenkrupp and Italy's De Nora, which own Thyssenkrupp Nucera in a 66/34 split.
"Demand is huge. We want to use that opportunity," Denis Krude, CEO of Thyssenkrupp Nucera, told Reuters ahead of a capital markets day later on Thursday where investors will be provided with a deeper look at the business for the first time.
Thyssenkrupp first floated the idea of an IPO of its hydrogen business in May last year.
"We are a technology leader for electrolysis and have been in the business for decades," Krude, who has led the division since October 2016, said.
Thyssenkrupp Nucera is the world's top supplier of chlor-alkali membrane technologies needed to produce hydrogen, competing with Japan's Asahi Kasei, China's Bluestar Beijing Chemical Machinery and Britain's chemicals group Ineos.
It is also active in alkaline water electrolysis (AWE), a key requirement for the generation of hydrogen produced via renewable energy, pitting it against Norway's Nel ASA, UK's ITM Power and France's McPhy Energy SAS.
In the fiscal year that ended in September, Thyssenkrupp Nucera posted earnings before interest and tax of 27 million euros while sales came in at 319 million euros, a level expected to triple to 900 million to 1 billion euros by 2025/26.
Order backlog currently stands at 1.3 billion euros, with AWE accounting for about 70 per cent.
"The market has enormous potential," Krude said, adding Nucera would invest 200 million to 300 million by 2024/25, of which 150 million-200 million will be spent on strategic moves including partnerships, production and smaller deals.
Europe, most notably Germany, wants to be a world leader in green hydrogen, which is generated via renewable sources and is therefore carbon-neutral, in a bid to cut emissions and decarbonise its economy.
Thyssenkrupp, which makes everything from steel and submarines to car parts and fertiliser plants, sees an IPO as the preferred option for Nucera but has not made a final decision on whether to go ahead with it.
"For the Thyssenkrupp group the most important thing in a possible IPO is the so-called value crystallisation," said Volkmar Dinstuhl, who leads the conglomerate's Multi Tracks division of units the group no longer wants to fully own.
Dinstuhl declined to say how much Thyssenkrupp would sell as part of a secondary offering in case of an IPO. --Reuters
Share