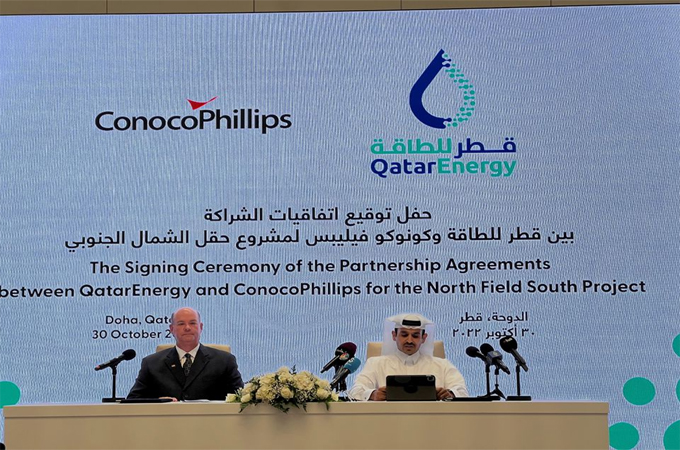 QatarEnergy and ConocoPhillips signed two sales and purchase agreements to export liquefied natural gas (LNG) to Germany for at least 15 years from 2026, the first such supply deal to Europe from Qatar's North Field expansion project.
The deal will provide Germany with 2 million tonnes of LNG annually, arriving from Ras Laffan in Qatar to Germany's northern LNG terminal of Brunsbuettel, QatarEnergy's chief executive said.
"(The agreements) mark the first ever long-term LNG supply agreement to Germany, with a supply period that extends for at least 15 years, thus contributing to Germany's long-term energy security," Saad al-Kaabi said in a joint news conference with ConocoPhillips CEO Ryan Lance.
German Economy Minister Robert Habeck said on Tuesday he was happy with the 15-year term of a deal struck with Qatar to deliver liquefied natural gas (LNG) to Germany.
"Fifteen years is great," Habeck told a business conference in Berlin in response to a reporter's question. "I wouldn't have had anything against 20 (years) or longer contracts."
However, he pointed to Germany's plan to become carbon-neutral by 2045, placing limits on the quantities of gas the country would receive in the future.
Germany will have to start reducing its gas consumption from the mid-2030s if it wants to meet its ambitious goal, the minister said.
A ConocoPhillips wholly-owned subsidiary will purchase the agreed quantities to be delivered ex-ship to the German receiving terminal, which is currently under development.
The deal comes a few days after QatarEnergy signed a 27-year sales and purchase agreement with China's Sinopec.
The North Field is part of the world's biggest gas field that Qatar shares with Iran, which calls its holding South Pars.
QatarEnergy earlier this year signed five deals for North Field East (NFE), the first and larger of the two-phase North Field expansion plan, which includes six LNG trains that will ramp up Qatar's liquefaction capacity to 126 million tonnes per year by 2027 from 77 million.
Since Russia's invasion of Ukraine in February, competition for LNG has become intense, with Europe in particular needing vast amounts to help replace Russian pipeline gas that used to make up almost 40 per cent of the continent's imports.
On Tuesday, Kaabi said negotiations were still taking place with other German companies for further supply. -Reuters
Share