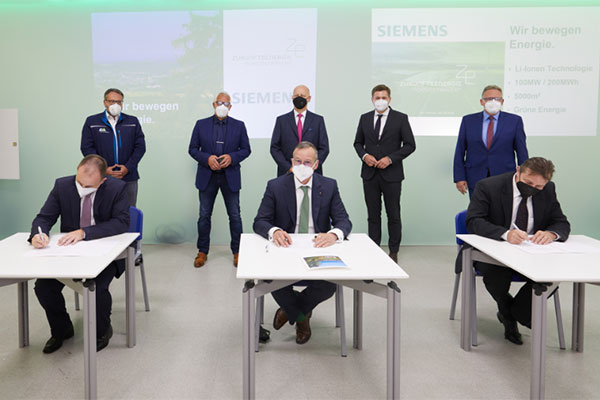 Signing of the letter of intent<br>Image courtesy: Siemens

Siemens Smart Infrastructure and Zukunftsenergie Nordostbayern GmbH (Zenob) have signed a letter of intent in Wunsiedel for the turnkey construction of a 100 megawatt battery storage facility in the German town.

The plant, with a storage capacity of 200 megawatt hours, is intended to use surplus renewable energy and cover demand peaks in the power grid. The 5,000-sq-m energy storage facility is capable of supplying 20,000 average households with electricity for a year. The lithium-ion battery storage system will be provided by Fluence, a joint venture between Siemens and AES.

Siemens will handle project management, including a technical implementation concept, as well as the construction of a medium-voltage switchgear system and connection to the high-voltage grid. Among other things, the letter of intent also includes the development of a financing concept.

“Electricity storage facilities are an important building block for shaping the future of energy,” said Marco Krasser, Managing Director of SWW Wunsiedel GmbH, one of the partners in Zukunftsenergie Nordostbayern GmbH.

“They can help stabilize the grid and make better use of energy generated from renewable sources. They draw surplus power from the grid and feed it back when electricity demand is higher. Smart storage technology will increase the local and national supply of green power. That is why we are gradually expanding the capacity.”

The planned storage system from Fluence will be able to store and release large amounts of green power. This will allow the more flexible use of clean energy beyond the hours of production, including during periods of expensive peak load.

“This also benefits the upstream grid operator because it gives them more flexibility to compensate for voltage fluctuations, which are increasingly common because of the expansion of renewable energy generation,” said Bernd Koch, Head of Technology Performance Services at Siemens Smart Infrastructure Germany. For the network operator, the solution promises significant relief.

“Switching on and off large industrial plants in the grid area requires a lot of electricity,” said Siemens’ project manager Andreas Schmuderer. “Up to now, the network operator has had to maintain considerable reserves. If these can be eliminated in the future, there will be great potential for reducing CO2 emissions in the local energy market.”

Last week saw the official groundbreaking for the construction of a hydrogen generation plant with a capacity of 8.75 megawatts in Wunsiedel. Once operational in 2022, the facility will produce up to 1,350 tons of hydrogen per year using only renewable energy, for example from solar or wind power. – TradeArabia News Service