Hydrocarbons will be part of any future energy mix: UAE 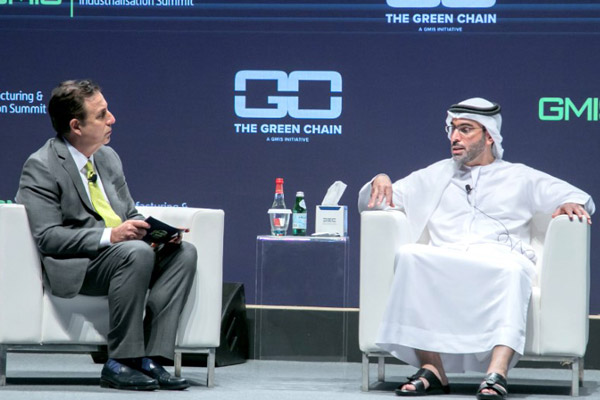 Sharif Al Olama at the fireside chat
Hydrocarbons will always play a role in global energy requirements, but their production should be using low-carbon extraction and production solutions. That’s why the UAE is well-placed to play a leading role in the global energy sector for years to come.
This was the message from Sharif Al Olama, Undersecretary for Energy and Petroleum Affairs at the UAE Ministry of Energy and Infrastructure, speaking during the opening session of The Green Chain Conference, taking place during the GMIS Week at Expo 2020’s Dubai Exhibition Centre, a WAM report said.
"I see no scenario in which there will be zero hydrocarbons required. But only producers that are low in carbon intensity are going to survive. And the UAE is in a good position," he said.
In a fireside chat, he noted that the UAE has always sought an energy mix, beginning in 1973 with the formation of Abu Dhabi National Oil Company Liquified Natural Gas (Adnoc LNG), the first company in the Middle East to liquify natural gas and eliminate offshore flaring.
Al Olama went on to outline the reason behind the UAE’s well-established reputation as a first mover in the energy industry, referring to the establishment of Masdar in 2006, the UAE’s ratification of the Paris Agreement in 2015, the launch of the UAE Energy Strategy 2050 in 2017, and, most recently, this year’s UAE Hydrogen Leadership Roadmap and the UAE Net Zero by 2050 Strategic Initiative.
"There is a strong track record," Sharif Al Olama said. "The UAE has the recognition from the international community as being a serious climate action leader."
However, this doesn’t mean the end of hydrocarbons. "The most important part I want to highlight here is that there has to be a proper and right energy mix. And hydrocarbons will be a part of that energy mix.
The Green Chain Conference was held alongside the GMIS Week at Expo’s Dubai Exhibition Centre, which gathered a cross-section of over 250 global leaders from the public and private sector. The GMIS Week included the two-day #GMIS2021 Summit from November 22 to 23, the Global Prosperity Conference on November 24, and country focused sessions in partnership with the United Kingdom, Australia, and Italy.
Throughout the six-day event, a manufacturing and advanced technology exhibition is featuring over 30 world-class exhibitors to highlight the UAE government’s ‘Make it in the Emirates’ campaign, a first-of-its-kind initiative to encourage local and international investors, developers and innovators to benefit from the facilities and incentives offered by the country’s industrial sector.
The Green Chain Conference featured a series of rich panel discussions around topics of economy-wide electrification and its potential to accelerate emission targets; decarbonisation investments in green hydrogen, showcasing the Abu Dhabi hydrogen alliance, a partnership between Mubadala Investment Company (Mubadala) and The Abu Dhabi National Oil Company (Adnoc), and ADQ, to establish governance and build a local blue and green hydrogen economy in the UAE.
The conference also explored challenges of global energy consumption and its foresighted increase of 50% by 2050, up to 70% in developing countries and emerging economies; but also the ensuing challenges of global decarbonisation and potential for 4IR technologies such as blockchain to disrupt the entire energy value chain by eliminating the need for tariffs in favour of a digitally enabled energy market.-- TradeArabia News Service
Share