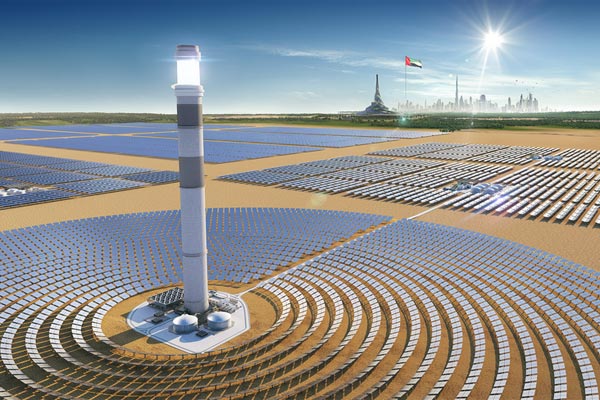 Saudi-based Acwa Power, a leader in power generation and water desalination plants, has announced plans to begin the first phase of Noor Energy 1 project, located in Dubai with a total capacity of 217 MW.
In a filing to Saudi bourse Tadawul, Acwa Power, said it had obtained the commercial operation certificate (COD) for the key project.
Dubai Electricity and Water Authority (Dewa) and Acwa Power formed a project company, Noor Energy 1, to design, build, and operate the plant. It is 51% owned by Dewa and 25% by Acwa Power, while the Silk Road Fund has a 24% stake.
The financial impact with regard to the operation of the project is likely to be reflected in the Q1 2022 financial results.
Noor Energy 1 is the largest single-site concentrated solar power (CSP) and a single hybrid solar power project in the world with three different solar energy technologies in deployment.
The technologies include building a CSP central tower, a CSP parabolic trough and solar photovoltaic panels based on the Independent Power Producer model.
The project is in line with Dubai’s Clean Energy Strategy 2050, as it aims to boost clean energy share in Dubai to 25 percent by 2030, saving 1.6 million tons of carbon dioxide in the process.
The 950 MW Phase Four is the largest investment project in the world that combines CSP and photovoltaic solar power with investments totalling AED15.78 billion based on the Independent Power Producer (IPP) model.
Noor Energy 1, being developed as the fourth phase of Mohammed bin Rashid Al Maktoum (MBR) Solar Park, has also received the Climate Bonds Initiative certification for renewable energy project financing.
-TradeArabia News Service
Share