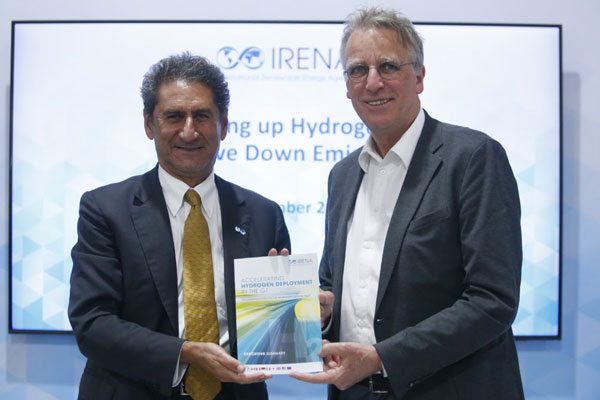 Accelerating Hydrogen Deployment in G7 being published
G7 members can be the front runners in low carbon and green hydrogen deployment, a new report by the International Renewable Energy Agency (Irena) contends. Overall, the consumption of hydrogen by G7 countries could grow between four and seven times by 2050.
Published at the UN Climate Change Conference COP27 in Sharm El-Sheikh, “Accelerating Hydrogen Deployment in G7: Recommendations for the Hydrogen Action Pact” sees some of the most favourable conditions like access to capital, presence of heavy industry, availability of renewable sources, existing local green hydrogen industry and technical know-how in G7 countries.
The commitment by G7 to reach net zero emissions by 2050 will require a significant deployment of green hydrogen. This also centre-stages the decarbonisation of end uses and hard-to-abate sectors like chemical production, steelmaking, long-haul aviation and shipping. Continuously low renewable power costs have made green hydrogen an attractive, if not the only decarbonisation option.
Economic footprint
Irena’s Director-General Francesco La Camera said: “G7 has a sizeable economic footprint, accounting for 30 per cent of global energy demand. Through joint action and focused collaboration, it can be a first mover and determine the conditions of a future hydrogen market in line with the Hydrogen Action Pact.”
He added: “Policymakers must also show leadership by sharing knowledge, finance and policy know-how with the international community to replicate opportunities and best practices everywhere else in the world. Crucially, with international co-operation, the emerging hydrogen market has the potential to be more inclusive, with opportunities for developed and developing countries alike.  Clear intent must be broadcast, to signal confidence to investors and industry.”
Align policy making
The new report encourages a G7 framework to align policy making and make concrete commitments to harmonise hydrogen standards and certification, share lessons from early implementation, balance the focus on supply with demand creation, promote hydrogen uptake in industrial applications and conduct more targeted collaboration with industry stakeholders and civil society.
While G7 has the potential to consume around 28% of global hydrogen, the aggregated hydrogen demand for G7 members was about 24.2 million tonnes of hydrogen in 2020, mostly from fossil fuels. The US was the largest consumer in G7, closely followed by the European Union.
Out of the 65,000 hydrogen patents filed globally between 2010 and 2020, G7 members accounted for 50% with two-thirds coming from Japan. Of the G7 members, the European Union as a whole and Germany aim to become technology exporters, building on their industrial development. By the end of 2021, roughly half of all electrolyser manufacturers were in Europe.-- TradeArabia News Service
Share