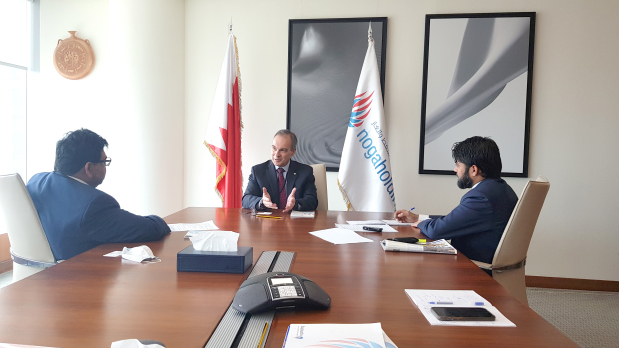 Thomas, centre, with Suleiman and Khattak, right
Future energy security and sustainable production to meet the growing demand are top priorities for Bahrain and nogaholding is taking steps to meet these key goals, the chief executive of Bahrain’s energy investment and development arm said in an exclusive interview.
Nogaholding is looking at a broader energy mix to ensure the security of future energy supply in accordance with the brief set by His Majesty King Hamad’s representative for humanitarian work and youth affairs and nogaholding chairman Shaikh Nasser bin Hamad Al Khalifa.
As the country drives ahead with the economic plans of His Royal Highness Prince Salman bin Hamad Al Khalifa, Crown Prince and Prime Minister, there will be an increasing need for energy to power that growth, Mark Thomas, the group CEO of nogaholding, told the GDN’s sister publication, the OGN energy magazine in an exclusive interview.
Bahrain is faced with the dual challenge of maximising the wealth of its existing natural oil and gas resources, and decarbonising production, in line with the kingdom’s net-zero emissions target by 2060.
“It is critical that the country assesses where the greatest opportunities exist and where it makes sense for it to participate. Bahrain will continue to explore oil and gas because it was a valuable product and a monetary instrument for the kingdom,” he said.
Thomas said a three-part strategy would be implemented to reach the goals.
They are: Looking at Bahrain’s overall supply and ensuring the security of supply so as to support its economic growth; maximising the wealth of the kingdom’s existing natural resources (oil and gas). That means looking at how oil and gas was found, developed, extracted and produced, and bringing world-class technology and latest best practices for the purpose; and thirdly, finding ways to decarbonise the country’s oil and gas production and produce lower carbon, more sustainable sources of energy.
Thomas doesn’t see the demand and market for oil and gas decreasing in the foreseeable future. “If not in the form of fuel, it may be in the form of petrochemicals and other derivatives. So there is going to be a market for our products, and it will still be a valuable market,” he added.
For now, the focus has shifted away from unconventional offshore to conventional onshore and offshore, both showing promising potential. Drilling of wells is underway for both oil and gas.
It was worth mentioning that Bahrain had, in April 2018, announced the largest discovery of oil since 1932. The unconventional Khaleej Al Bahrain field offshore was said to contain up to 80 billion barrels of tight (or shale) oil.
However, extraction still remains a challenge, with geological and geophysical (G&G) analysis still continuing.
One of Bahrain’s major investments and a significant project for the oil sector is the $7 billion Bapco Modernisation Programme (BMP) where work is in progress to build a highly-efficient refinery. The project is expected to enter full capacity in 2024, he said.
Also under consideration of nogaholding is the diversification of energy sources with investments in renewables, and especially solar.
“Bahrain could presumably jointly produce power on large solar farms in neighbouring countries and transmit it through submarine cables,” Thomas said highlighting lack of enough land for such projects in the kingdom.
In addition to its existing energy assets, the country will offer opportunities both for investment in conventional oil and gas, as well as in renewables, he added.
Despite the impact of the Covid-19 pandemic, Bahrain’s energy sector has continued to attract investment. It recently refinanced a $1.6-billion murabaha facility, which was well oversubscribed. --OGN
* The full interview can be read on: https://ognnews.com/Article/45532/KINGDOM_SETS_ON_TRANSITION_PATH
Share