Biden will ask for pause on gas tax amid record prices 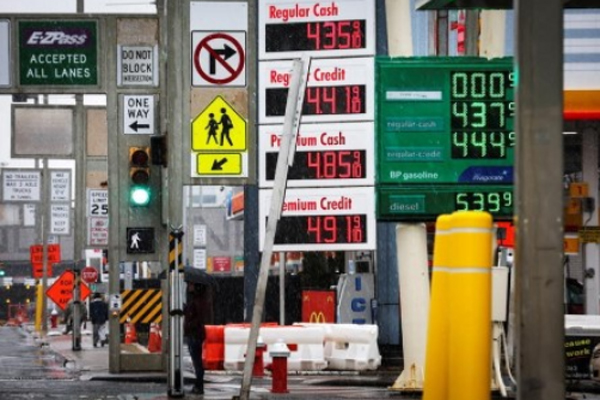 US President Joe Biden on Wednesday will call on Congress to pass a three-month suspension of the federal gasoline tax to help combat record pump prices, according to a senior administration official.
The president will also call on states to temporarily suspend state fuel taxes, which are often higher than federal rates, the official said, and he will challenge major oil companies to come to a meeting with his energy secretary later this week with ideas on how to bring back idled refining capacity.
Biden and his advisers have been discussing the issue for months amid increasing pressure to take action to address record-high gas prices that have weighed down the president's poll ratings and cast a dark cloud over Democrats' chances of retaining congressional power in November's elections.
A suspension of the 18.4 cents a gallon federal gasoline tax and 24.4 cent diesel tax would require congressional approval, likely making Biden's support behind the effort largely symbolic.
Lawmakers of both parties have expressed resistance to suspending the tax, with some Democrats, including House of Representatives Speaker Nancy Pelosi, worried that the move would have limited effect on prices and oil companies and retailers would pocket much of the savings.
"A federal gas tax suspension alone won't fix the problem we face, but it will provide families a little breathing room as we continue working to bring down prices for the long haul," a second official said.
Biden will ask Congress to suspend the fuel tax through September, a move that will cost the Highway Trust Fund roughly $10 billion in forgone revenue, the official said. The White House believes it can make up the lost revenue from other areas of a budget that is seeing revenue grow and deficits shrink as the United States emerges from the Covid-19 pandemic.
Some states, such as New York and Connecticut, have already paused state fuel taxes, while others have entertained ideas like consumer rebates and direct relief.
News of Biden's announcement - which will come in an afternoon speech - first came on Tuesday night.
Refiners are struggling to meet global demand for diesel and gasoline, exacerbating high prices and aggravating shortages.
US pump prices are near $5 a gallon as soaring demand for motor fuels coincides with the loss of about 1 million barrels per day of processing capacity. In the last three years many plants were closed when fuel demand cratered at the height of the Covid-19 pandemic. --Reuters
Share