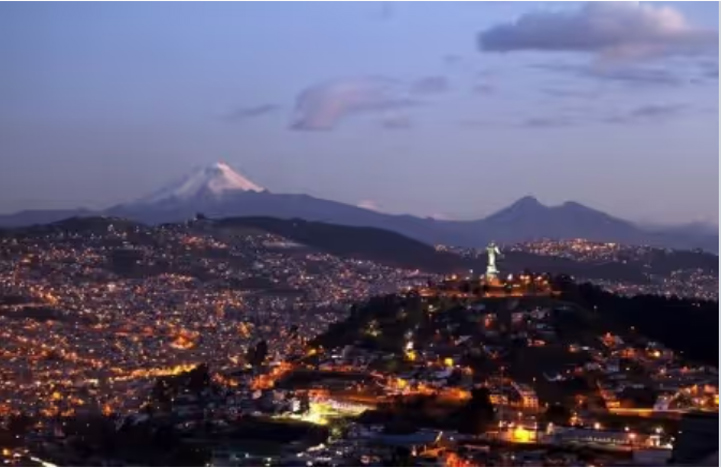 A Luxembourg bailiff has ordered banks to freeze assets held by Ecuador in Luxembourg accounts as a result of a dispute over a $391 million settlement award that Anglo-French oil company Perenco says remains unpaid, a document seen by Reuters show.
Ecuador's government pledged in June 2021 to honor the debt, awarded Perenco by the World Bank's International Centre for Investment Disputes (ICSID), which ruled Ecuador had unlawfully ended a production-sharing agreement with the company.
Ecuador's economy ministry said on Monday afternoon it had not been formally informed of the asset freeze and would establish payment terms for the settlement, which it said was for some $374.3 million.
"The Ministry of Economy and Finance advises that until now it has not received an official notification on the part of judicial authorities in Luxembourg, nor is it aware of any effect on the assets of the country abroad," the ministry said in a statement, adding it would "continue with the establishment of a payment mechanism with Perenco."
Ecuador's solicitor general said last year that due to tight finances the government had contacted Perenco to negotiate a payment plan.
"Perenco has to date, more than one year later, still not received a single dollar from Ecuador," Perenco said in a statement on Monday, adding it will "take steps to enforce its payments rights against Ecuador in Luxembourg and other jurisdictions."
Global law firm Hogan Lovells, legal advisers to Ecuador on US law, declined to comment.
A spokesperson at the London office for Cleary Gottlieb Steen & Hamilton LLP's, legal advisers to the dealer manager on Ecuador's eurobonds, did not immediately respond to a request for comment.
Perenco now has eight days to start court proceedings to validate the attachments, and Ecuador has 50 days to instruct a law firm to represent them in Luxembourg, said Fabio Trevisan, partner and head of BSP's Dispute Resolution practice, the law firm representing Perenco.
A document seen by Reuters shows a Luxembourg bailiff, Pierre Biel & Geoffrey Galle, on July 28 ordered 122 banking entities operating in Luxembourg to freeze assets in accounts used by Ecuador on behalf of Perenco.
A spokesperson for European settlement house Clearstream confirmed that Clearstream Banking SA in Luxembourg had received the bailiff note, though declined to give further details.
An employee at the bailiff declined to comment when contacted by Reuters because they are not authorized to speak to parties not involved in the case.
Reuters could not immediately establish what assets Ecuador held in Luxembourg accounts. The banks named included Deutsche BankDBKGn.DE, Credit SuisseCSGN.S and HSBCHSBA.L.
Credit Suisse and Deutsche Bank declined to comment, while HSBC did not immediately respond to requests for comment.
LUXEMBOURG BONDS
The Latin American country two years ago defaulted on $17.4 billion of foreign debt as the nation buckled under one of the region's worst coronavirus outbreaks following years of economic stagnation.
As part of the debt restructuring that followed, Ecuador sold new bonds maturing in 2030, 2035 and 2040 which are listed on the Luxembourg stock exchange.
Many of these bonds had interest payments falling due on July 31. Some holders of the bonds have received interest payments which had been due on the securities on July 31, sources familiar with the matter said.
Holders of Ecuador's international bonds include major asset managers such as BlackRock, PIMCO and JPMorgan, according to data available on EMAXX, which provides details of funds' holdings based on their public disclosures. PIMCO declined to comment, while BlackRock and JPMorgan were not immediately available for comment.
The case that led to the ICSID award stemmed from a 2007 decree issued by then-President Rafael Correa that boosted the Ecuadorean state's take from sales of oil produced by private companies exceeding a certain level.
Perenco sued Ecuador in 2008 and was ultimately awarded $412 million in May last year. Perenco is entitled to $391 million after taking into account compensation it was ordered to pay Ecuador for environmental damage caused in the areas where it operated in Blocks 7 and 21.
President Guillermo Lasso, a conservative former banker who took office in May 2021, has promised to revive Ecuador's economy and attract investment - especially in oil and mining.
"Perenco remains hopeful that Ecuador's Government will finally honour its international obligations, demonstrate its commitment to the rule of law, and uphold its promises to foreign investors, by promptly satisfying the Award without further delay," the company said in its statement. . – Reuters
Share