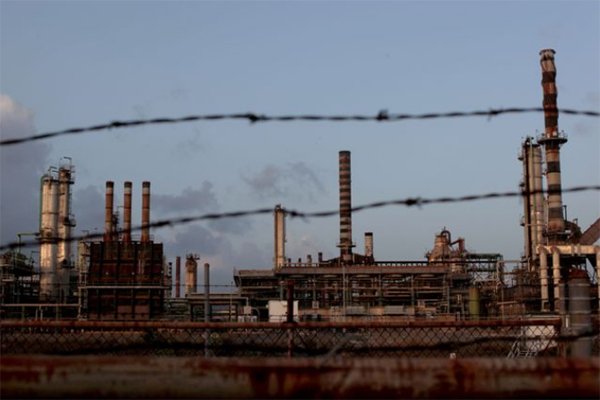 The owners of Limetree Bay, a Caribbean oil refinery dogged by cost overruns and regulatory troubles, filed for bankruptcy after lenders balked at putting new cash into the project.
The Environmental Protection Agency in May ordered the St. Croix, US Virgin Islands, plant, to shut temporarily following a series of fires and noxious gas releases. Those incidents contaminated local drinking water, shut a school and led residents to complain of breathing problems and foul odors.
The shutdown came amid a row between the plant and EPA over who was responsible for installing air monitoring systems. The EPA ordered the equipment installed and recently told the company not to further release gases.
"Severe financial and regulatory constraints have left us no choice but to pursue this path, after careful consideration of all alternatives," Jeff Rinker, Limetree Bay's chief executive, said of the bankruptcy filing in a statement.
Late on Monday, Limetree and its debtors requested court approval to obtain up to $25 million in so-called debtor-in-possession financing.
The requested facility would allow the parties to immediately borrow $5.5 million, with approval for rest of the amount at subsequent hearings.
Limetree Bay, which began a long-awaited restart earlier this year, was the most expensive effort in nearly a decade to expand oil refining capacity in the Western Hemisphere. It aimed to supply cleaner marine and other motor fuels but the plan fizzled after construction delays ran into the Covid-19 pandemic, which slashed demand for all types of fuels.
More recently, lenders objected to the plant's call for new cash to complete the project, according to the head of EIG Global Energy Partners, the Washington-based private equity firm that leads the largest investor group.
"EIG supports the company's efforts to secure funding," EIG Chairman Blair Thomas said in a statement, adding "to date the senior lenders have objected" to those efforts. The firm and its partners became "the reluctant owners" earlier this year when its original sponsor withdrew, he said.
EIG and Limetree Bay "regrets the impact the bankruptcy filing will have on the local community" and would work to provide help to local residents, he said.
Westbourne Capital, an Australian debt investor that provided a $700 million term loan, holds the senior-most debt in the project and could decide the plant's fate, according to a person familiar with the matter who was not authorised to speak to media and declined to be identified. Westbourne did not reply to requests for comment.
ONCE A TOP REFINERY
Limetree Bay, formerly known as Hovensa refinery, was once the largest oil refinery by capacity in the Western hemisphere. It was idled in 2012, filed for bankruptcy three years later and was acquired in 2016 by Arclight Capital Partners and Freepoint Commodities which collected up to $3.5 billion in equity for the project, people familiar with the matter said.
Court filings on Monday showed that former Bear Stearns senior managing director Steven Pully was named to negotiate with "multiple potential lenders" for urgently needed financing that would allow the plant to operate in bankruptcy. The filings did not say whether Limetree Bay had obtained any commitments.
The project had liabilities of between $500 million and $1 billion and assets valued at $1 billion to $10 billion, according to the filings in US Bankruptcy Court, Houston.
Among the top 30 unpaid suppliers owned more than $150 million was oil producer BP and construction and equipment providers Universal Plant Services, Elite Turnaround Specialists and Excel Construction.
The restart was delayed by over a year and went more than $1 billion over budget as project managers discovered additional corrosion on idled equipment and needed to replace more parts than originally expected.
Investors had hoped to profit from an international clean-air marine fuel mandate known as IMO 2020 but the restart of the 210,000-barrel-per-day facility quickly attracted complaints from residents. Reuters also reported the facility was also not monitoring for sulfur dioxide as required by law. --Reuters
Share