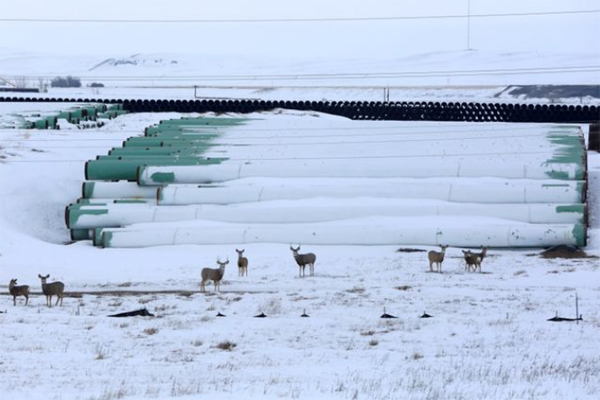 TC Energy's 590,000-barrels-per-day Keystone oil pipeline has resumed operations, the company said, after it was shut the previous evening for unplanned maintenance as parts of western Canada grappled with frigid winter weather.
TC said the pipeline, which ships crude from the oil sands province of Alberta to the US Midwest, was restarted safely at around 6:15 p.m. local time on Wednesday (0115 GMT Wednesday) amid extremely cold temperatures at its Hardisty terminal in central Alberta.
Temperatures in Hardisty were forecast to plunge to minus 35 degrees Celsius (minus 31 degrees Fahrenheit) on Wednesday night. Most of Alberta is under an extreme cold warning that is expected to last until the weekend.
The company said the unplanned maintenance on Keystone began at around 8 p.m. local time on Tuesday (0300 GMT Wednesday). TC's Gulf Coast operations in the United States were uninterrupted.
Canadian heavy crude prices tightened on Tuesday as traders anticipated oil sands production issues relating to the cold snap. On Wednesday, Western Canada Select heavy blend crude traded at $12.10 per barrel below the US crude benchmark, narrowing 5 cents from the previous day. --Reuters
Share