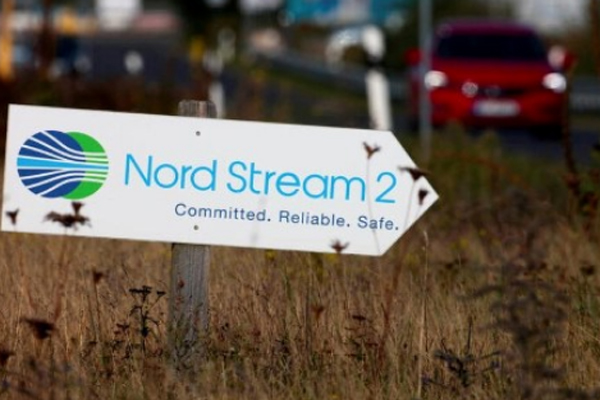 The European Union could cope with a short term halt to all Russian gas imports but doing so would have "profound economic consequences" and require emergency measures to curb demand, according to analysis by the think tank Bruegel.
Escalating tensions between the West and Russia over Ukraine have raised concerns about Russian gas flows to Europe, prompting the European Commission and the United States to investigate alternative supplies.
In an analysis due to be published on Thursday, Bruegel said that if Russia cut off all gas, the EU would need to both hike imports of liquefied natural gas (LNG) and impose emergency measures to cut demand -- such as factory closures -- to avoid severe shortages.
Simone Tagliapietra, a senior fellow at Bruegel, said such a scenario would have "profound consequences for the economy."
"Such a war-scenario would imply difficult and costly decisions for Europe to orderly manage the situation," he said.
Soaring gas prices in recent months amid lower-than-expected supplies Russian supply have already hiked Europeans' household bills, and forced some gas-reliant industries to curb production.
Russia supplies around 40 per cent of EU gas use, but reliance varies between countries. Central and eastern European states with pipelines designed to import gas from the east, rather than Western Europe, could still suffer shortages if Moscow cut supply, said Bruegel, which provides research to EU ministers and institutions including the EU Parliament.
The analysis said spare infrastructure capacity could add 17 TWh of weekly imports from Norway, North Africa and LNG - nearly replacing levels Europe received from Russia in recent weeks. However, those countries may not be able to boost deliveries, and measures to curb demand would also be needed.
In a scenario with very cold weather plus no Russian gas from February, EU gas storage could be emptied by end-March, Bruegel said.
Were Russian gas supplies to be cut off into next winter and beyond, the analysis said the EU would find it harder to manage.
Europe would need to curb gas use further, with options including higher coal-fuelled power production -- resulting in more CO2 emissions -- or Germany delaying nuclear plant closures, a politically sensitive decision.
A jump in LNG demand could also see prices soar, hitting the EU economy and poorer countries bidding to buy LNG.
European regasification terminals and unused pipeline capacity could technically cover the 1,700 TWh of gas Europe receives from Russia, based on 2021 data.
In practice, Bruegel said that capacity may not materialise, given limited global liquefaction capacity and suppliers' existing contracts to send LNG cargoes to Asia. --Reuters
Share