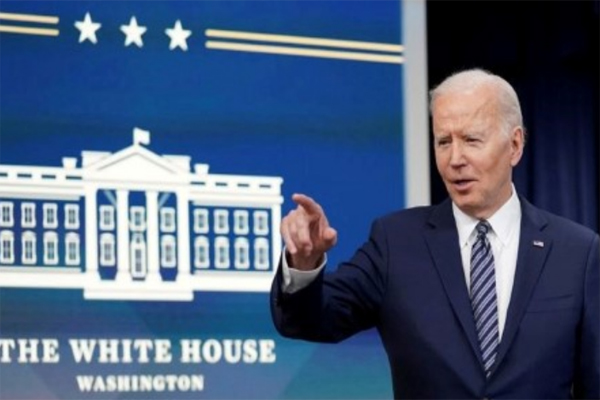 US President Joe Biden on Wednesday demanded oil companies explain why they aren't putting more gasoline on the market, sharply escalating his rhetoric against industry as he faces pressure over rising prices.
Biden wrote to executives from Marathon Petroleum Corp, Valero Energy Corp, and Exxon Mobil Corp and complained they had cut back on oil refining to pad their profits, according to a copy of the letter seen by Reuters.
"At a time of war, refinery profit margins well above normal being passed directly onto American families are not acceptable," Biden wrote, adding the lack of refining was driving gas prices up faster than oil prices.
"The lack of refining capacity - and resulting unprecedented refinery profit margins - are blunting the impact of the historic actions my Administration has taken to address Vladimir Putin's Price Hike and are driving up costs for consumers."
The letter is also being sent to Phillips 66, Chevron Corp, BP and Shell, a White House official, who declined to be identified, told Reuters.
Biden has been intensifying attacks against oil companies in recent days as US gas prices raced to record highs above $5 per gallon this past weekend and ahead of the summertime driving season.
Rising gas prices have helped drive unexpectedly persistent consumer price inflation and voter anger ahead of the Nov. 8 midterm elections where Biden's Democratic Party is defending its control of Congress.
US consumer inflation unexpectedly accelerated in May, leading to the largest annual increase in four decades. White House officials have hotly debated how to respond to a problem they once thought would fade and now see as largely out of their control.
Biden has attributed rising oil prices primarily to US-led sanctions that took Russian energy supplies off the global market after its invasion of Ukraine.
But in recent days, Biden has taken the fight to major oil companies, which are riding rising energy prices to record earnings.
The president, who came into office vowing to reduce US dependence on fossil fuels, now wants to speed up oil production, which is expected to hit record highs in the United States next year.
"Exxon made more money than God this year," Biden said last week. Exxon made $5.48 billion in the quarter ended March 31, double the year prior, and told investors to expect strong profits to last into next year.
US Energy Secretary Jennifer Granholm plans to host an emergency meeting on how refiners can respond to higher prices, Biden said, asking for a response from the oil companies beforehand.
He said they should provide "concrete ideas" to increase oil refining along with an explanation for why they may have cut such capacity in the last two years. --Reuters
Share