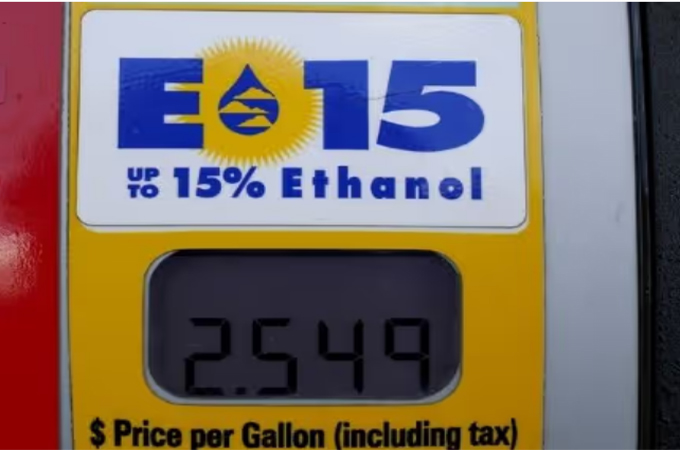 US senators from Nebraska and Minnesota introduced legislation that would expand nationwide sales of E15, a gasoline with a higher blend of ethanol, after gaining support for the bill from an oil industry trade group for the first time, Senator Deb Fischer from Nebraska told Reuters.
The legislation, introduced by Fischer and Senator Amy Klobuchar from Minnesota and supported by the American Petroleum Institute (API), would mark a huge win for the ethanol industry and corn farmers who have repeatedly tried to expand sales of E15 but have faced hurdles.
While it is unknown if the bill has the support it needs to pass both the House and Senate to become law, the backing of the oil industry has lifted a notable political obstacle.
US Environmental Protection Agency (EPA) anti-smog regulations currently restrict summertime sales of E15, even though research has shown the higher percentage blend may not increase smog relative to the 10 per cent blend called E10 that is now sold year-round.
Reuters reported this month that the API began cooperating with biofuel industry groups about legislation after governors from major corn-producing Midwestern states earlier this year requested the EPA allow for expanded sales of E15 in their own states. The governors' proposal raised oil industry concerns about fuel regulations differing from state to state.
"We have good support," Fischer told Reuters. "When you look at the impact it'll have, especially on the central part of the US, the Midwest and part of the south, I think that's extremely important."
Fischer and Klobuchar's legislation, if passed, would nullify the governors' request and avoid patchwork E15 expansion, Fischer said.
"By allowing for the year-round sale of E15 nationwide while also preserving access to lower ethanol gasoline blends, this bipartisan legislation strengthens the reliability of the fuel supply chain and ensures American consumers have access to the fuels they depend on every day," said Will Hupman, API's vice president of downstream policy.
The legislation also has the support of Senator Kevin Cramer from North Dakota, a co-sponsor of the bill. Cramer's support is significant, as North Dakota is one of the top oil-producing states, Fischer said.
Organizations including the API, the Renewable Fuels Association (RFA) and the National Farmers Union wrote to congressional leaders this month to urge them to adopt legislation to expand nationwide E15 sales.
"We thank Sens. Fischer, Klobuchar, and other renewable fuel supporters in the Senate for introducing this legislation, which brings much-needed consistency and stability to the marketplace," said RFA President Geoff Cooper, after Tuesday's legislation announcement. -Reuters
Share