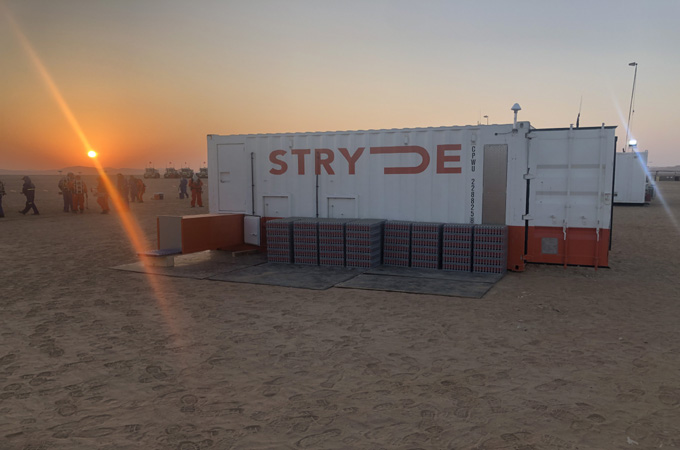 International seismic technology company, Stryde, has been awarded a multi-million-dollar contract for the supply of an 80,000-channel nodal acquisition system in the Middle East.
Contracted to one of the largest geophysical services provider, BGP, who will lease Stryde’s containerised Compact System for use on a high-density 3D acquisition project in Oman. This deal follows multiple contracts between BGP and Stryde globally.
Along with the company’s differentiated nodal technology, Stryde will supply its Compact System, a containerised node management solution that allows one operator on shift to rotate around 13,000 nodes every 24 hours. This is made possible by Stryde’s built-in node charging and data-harvesting systems, allowing the client to drive further efficiencies on this high-density 3D seismic survey.
Sam Moharir, Stryde’s Head of Business Development, MENA said: “Stryde Nodes help with denoising seismic data acquired in desert environments and enable large-scale high-density seismic surveys. Due to the system’s compact size and reduced cost, Stryde is the only feasible solution for high-density land seismic acquisition, capable of handling the frequency-band overlap between noise and effective signals.
An additional feature of the Compact System allows for a minimal seismic camp footprint, and reduced crew sizes, and vehicles. In turn, this significantly lowers HSE risk exposure in the field. Housed in a single standard 20ft shipping container, the innovative Compact System allows flexibility to expand the channel count up to 150,000 nodes without needing additional infrastructure or operators in the Compact container.
Moharir continues: “As the system is so easy to use, it doesn’t need experienced seismic crews to operate it, allowing inexperienced people to deliver the survey using Stryde technology.
“This serves as further proof that our nodal system is fundamentally changing energy exploration and production markets across the globe. Our nodes have not only radically evolved how land seismic is acquired -reducing the environmental impact while enabling higher density and providing more affordable seismic acquisition - but they’re also having a positive impact on the communities they operate in,” he concluded.
This latest project has resulted in well over 400,000 Stryde Nodes working in the Middle East across multiple separate campaigns, in the last 24 months. --OGN
Share