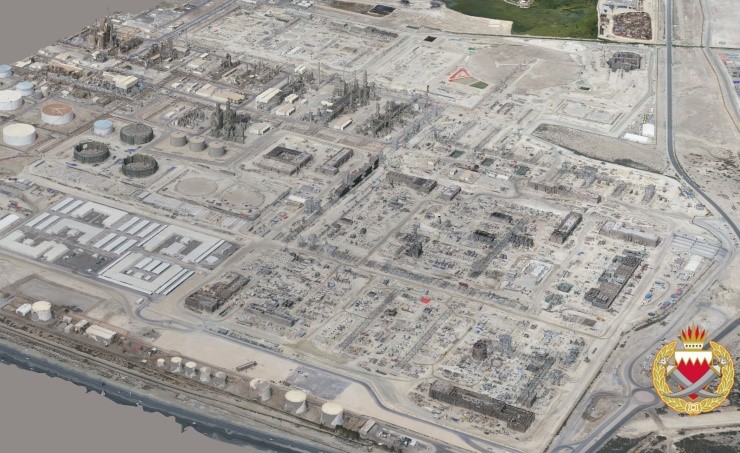 The BMP project
Bahrain has completed 50% of the project to upgrade the Bapco Refinery, one of the largest projects in the country at an estimated cost of $6 billion.
Minister of Oil Shaikh Mohammed bin Khalifa Al Khalifa praised the good performance and efforts of the executive management of the Bapco Modernization Project (BMP) in striving for the project to proceed according to the schedule, despite the negative economic effects of the Covid-19 pandemic.
The project will have a significant positive impact on revenues and is scheduled to be completed in the third quarter of 2022, he said.
Shaikh Mohammed also announced the completion and launch of the first LNG jetty consisting of a floating storage unit, a port, a sea barrier, a nearby platform for fumigation of liquefied gas to return to its gas state, underwater pipes to transport gas from the platform to the shore, a land gas delivery facility, and a land-based nitrogen production facility.
Saudi Arabia is establishing a network of gas pipelines to connect Bahrain with the rest of the GCC countries, which will have a positive repercussion on various levels, particularly the expansion of oil and industrial projects in the kingdom.
The minister stressed the kingdom's keenness to strengthen cooperation in this field with various entities, organisations and specialised companies to exchange ideas and experiences and identify the latest technologies for the development of the oil, gas and energy sector in Bahrain.
He noted the importance of encouraging international oil companies to invest in exploration and production in Bahrain.
Shaikh Mohammed referred to investment opportunities in oil blocks (1, 2, 3 and 4) in Bahrain estimated to have an area of 9,000 square kilometres.
He noted that he has recently signed with the Italian company Eni to drill several wells in block 1 with the start scheduled for April, but now postponed due to the Coronavirus.
As for block 4, recently discovered, it is located in the Gulf of Bahrain where the drilling of the experimental well was completed. The well began to flow last year and it will be added to the production systems soon.
The minister praised the cooperation with Halliburton company, which provided all its expertise, knowledge and techniques resulting in positive achievements in this field. Two deep gas wells have also been drilled and further achievements are expected in the future.
He was highlighting the latest developments in the oil sector in the kingdom during the COVID-19 pandemic and its economic consequences in a YouTube interview hosted by the US Chamber of Commerce in Bahrain.
Shaikh Mohammed said he highly appreciated the meeting organised by the Chamber in cooperation with the Oil and Gas Holding (nogaholding) last year with the major US companies in the field of oil and gas in Houston to discuss opportunities for investment in the Bahraini energy sector in light of the recent oil discovery, the largest in Bahrain's history.
He said Bahrain is looking forward to strengthening cooperation and taking advantage of the technologies acquired by US oil companies in the field of exploration and supply of logistics and complementary industries.
The minister said the world economy is facing a major problem in light of the Coronavirus pandemic, which stopped the global economic movement, affected all the activities of international companies and posed a threat to the continuity and survival of these companies in the world markets.
Shaikh Mohammed stressed the commitment to flexibility, wisdom and good planning at this time that guarantees a better and promising future for the world oil markets.
The minister pointed out the importance of strengthening the role of shared responsibility among all oil producers and mutual support to come up with decisions that help the vital industry to survive, continue and prosper.
He added that the Coronavirus pandemic has led to an unprecedented decline in demand for oil, stressing that the indicators are worrying for the oil industry and for the prosperity and growth of oil development projects.
On this basis, the Organization of the Petroleum Exporting Countries (Opec) adopted decisions at its last meeting in March by reducing oil production by 10 million barrels per day from May 1, 2020 for an initial period of two months. The hope is that the global pandemic will soon recede and the economy will flourish again. -- Tradearabia News Service
Share