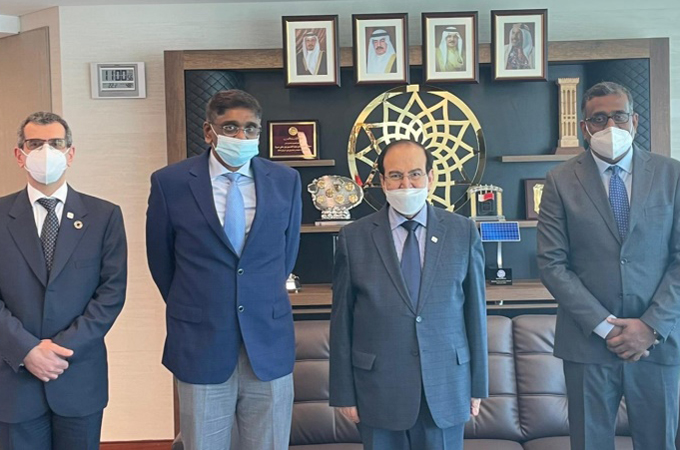 Bahrain's Sustainable Energy Authority (SEA) President Dr Abdul Hussain bin Ali Mirza received a delegation from CleanMax, a leading solar energy company in India.
Dr Mirza briefed the delegation, headed by the company’s CEO Anil Thomas, on the national plans for renewable energy and energy efficiency and the most prominent existing and future projects in both fields, said a Bahrain News Agency report.
He discussed the successful launch of the initiative to install solar energy systems distributed on the roofs of government buildings, adding that it has been implemented on 535 buildings using the "Boom" system, without any investment costs for the beneficiaries of the clean energy produced.
SEA President explained that this initiative is one of those included in the national renewable energy plan, which has a great contribution to encourage investment in renewable energy in Bahrain, to overcome the limited space, and it is also an important factor in achieving the national goal to increase the share of renewable energy resources to 5% by 2025 and to 10% by 2035.
He noted that the total energy expected to be produced through this initiative is estimated at 50 megawatts, thus constituting 20% of the national renewable energy target to be achieved for the year 2025.
Dr. Mirza said that the SEA has met a wide response and demand from various governmental and non-governmental agencies to offer their roofs and proper spaces to install solar energy systems on them and benefit in saving in electricity costs and reduce the carbon footprint.
The company’s delegation highlighted their achievements in the field of solar energy and high-efficiency technology. They expressed their aspiration to support SEA’s efforts to achieve the desired goals of the national renewable energy plan.
CleanMax pioneered the ‘Energy Sale’ model in rooftop solar in 2012 in India. CleanMax has successfully installed 500+ projects for 150+ corporates, with a total rooftop solar operating capacity of 220+ MW. CleanMax also operates 380+ MW of large-scale solar farms in Karnataka and Tamil Nadu, for supply to its corporate customers.
Share