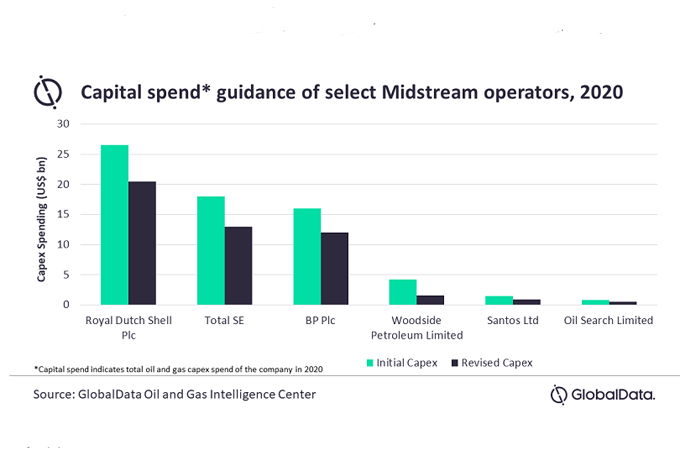 Several companies in the Asia-Pacific (APAC) region have realigned their capital spending during 2020 due to the Covid-19 impact, leading to delays in some pipeline and liquefied natural gas (LNG) projects in the region, says a report.
Additionally, reduced LNG imports from some of the key consumers such as Japan, China and India have further dented the growth of the midstream sector in the region, says GlobalData, a leading data and analytics company.
Haseeb Ahmed, Oil and Gas Analyst at GlobalData, comments: “The rising ambiguity around the current economic scenario is deterring the prospective investors. One of the go-to strategies for several LNG operators has been downsizing the overall capital expenditure (capex) for 2020. For example, Woodside’s decision to cut the planned total capex in 2020 has led to a delay in final investment decisions (FIDs) on Pluto Train 2 LNG, Browse–North West Shelf pipeline and Scarborough–Pluto pipeline developments in Australia. Withdrawing the capex plans ensured that these companies had sufficient working capital, but it might dent their profitability in the long run.”
Major pipeline and LNG operators have reported that their year-on-year financial performances have been hit in 2020. Consequently, midstream operators such as Royal Dutch Shell, Total SE and BP have reduced their capex by more than 20% to ensure steady cash flows.
Ahmed concludes: “The oil and gas sector has undergone significant losses, pushing companies to take desperate measures such as reducing capex or delaying FIDs. However, on the brighter side, the global LNG supply glut along with low LNG prices will encourage new countries such as Myanmar, Vietnam and Sri Lanka to speed up LNG importing infrastructure. These new entrants will possibly contribute to the future LNG industry growth in the APAC.” - TradeArabia News Service
Share