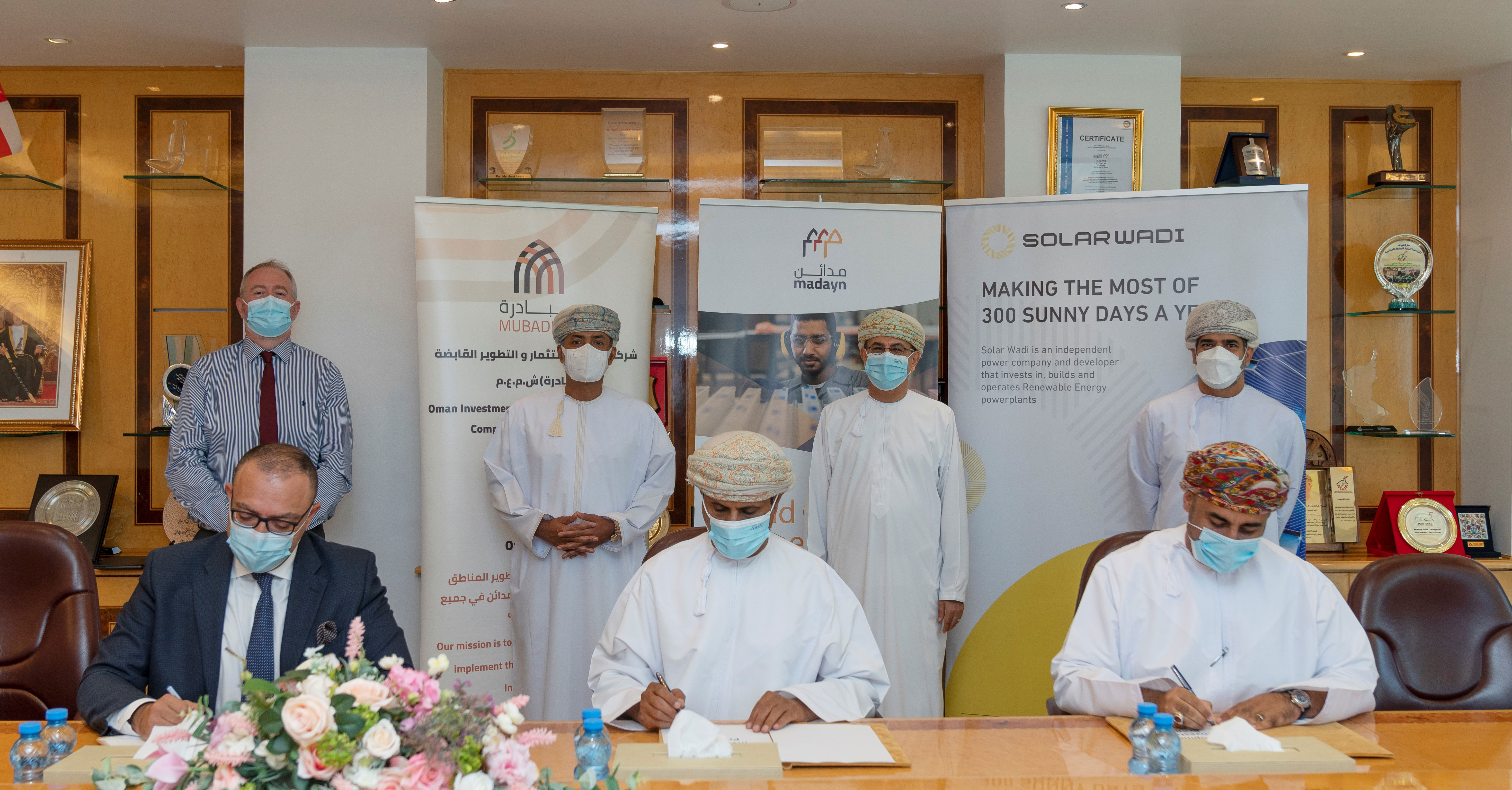 The Public Establishment for Industrial Estates (Madayn), Mubadrah and Solar Wadi today signed an agreement with the objective to construct a 100MW Solar PV Farm in Suhar Industrial City which will be operational by next year.
The initiative is part of the overall strategy of Madayn in providing a significant portion of the energy needs of its tenants from a sustainable renewable energy source, in line with Oman Vision 2040’s sustainability goals, Madayn said in a statement.
The agreement was signed by Eng Musallam bin Mohammed Al Shehri, Head of Operations Sector at Madayn, Mustafa Al Lawati, Chief Executive Officer of Mubadrah; and Yazan Faouri, Chief Executive Officer of Solar Wadi, and forms part of the larger overall Madayn Renewable Energy Project initiative which is being undertaken to transform the way the electricity needs of all industrial cities and free zones under Madayn umbrella are being met in order to have a significant portion being powered by renewable solar energy during the day.
Commenting on the agreement, Mustafa Al Lawati, CEO of Mubadrah, stated that “this agreement comes along the lines of the efforts undertaken by Madayn in moving towards more sustainable energy sources and helping to reduce the carbon footprint of the industrial sector in Oman, as set out in Vision 2040, the gateway to Oman becoming a developed nation under the guidance of His Majesty Haitham bin Tarik.”
He added that the ultimate aim is to provide all Madayn tenants with saving on their electricity cost while attracting investors to invest into the development of the Solar Park, in so doing help to increase the competitiveness of all companies within Madayn industrial cities and free zones, which will consequently create a positive impact on their business operations and Oman’s economy as a whole.
“Mubadrah as the investment arm of Madayn, and in our continued efforts to support the tenants of Madayn, we are keen to invest alongside Solar Wadi the main developer for the initiative into providing sustainable solutions and services that are aimed at allowing all tenants at Suhar Industrial City to take advantage of the many environmental, sustainable and economic benefits from such projects with no investment, guarantees or major involvement being required from the tenant’s side,” he added.
Yazan Faouri, CEO of Solar Wadi, pointed out that: “The aim of this initiative and collaboration is to enable us to work together in our combined efforts to deliver a sustainable, ecological, more economical, and socially conscious power solution for all tenants at Suhar Industrial City from a Renewable Solar Energy source, in so doing contributing to the ambitions and goals of the Omani Governments, under the leadership of His Majesty Haitham bin Tarik, in transforming Oman’s economy into a developed, diversified and sustainable national economy as a set out by Oman Vision 2040.”
Faouri added that “This project represents a strategic investment for Solar Wadi, as one of the first independent Omani power companies that invests in, builds and operates Renewable Energy power plants, and is only the 1st in a number of investments planned for the Omani market which is targeted as a total investment of 300 million OMR ($0.75 billion) in developing a combined capacity of circa 1 GW of Solar PV Energy plants across the Sultanate.With investments being made mainly in Madayn Renewable Energy Project initiative over all industrial cities and free zones under Madayn umbrella, along with a significant number of other Solar plants being developed for the wider private sector C&I companies and governmental entities across a wide range of business sectors in the Omani Economy.”
Madayn and its partners plan to roll out the Madayn Renewable Energy Project initiative across all industrial cities and free zones in the coming couple of years, utilizing a combination of overall Holistic Solutions which involves larger centralized Solar Plant that will cater for collective needs of all tenants within the industrial city that are connected to the regular distribution networks and direct Private-Wire Solutions for those high consumption tenants within the industrial city that have individual electricity feeds.—TradeArabia News Service
Share