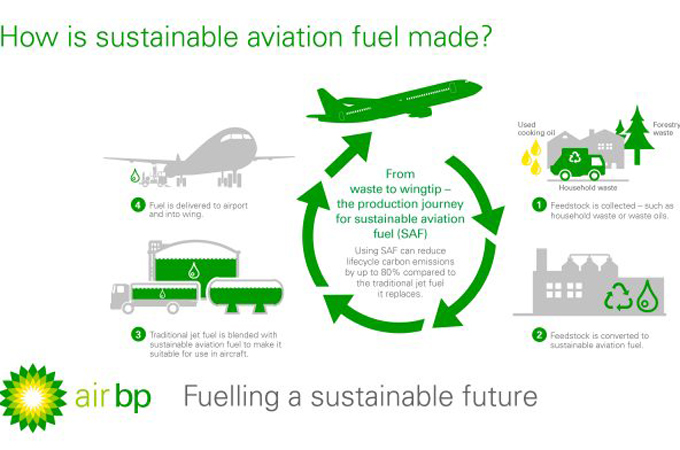 Masdar, Adnoc, bp, Tadweer (Abu Dhabi Waste Management Company) and Etihad Airways have announced an agreement to conduct a joint feasibility study on exploring the production in the UAE of sustainable aviation fuel (SAF) and other products.
The study will also look at producing renewable diesel and naphtha, using municipal solid waste (MSW) and renewable hydrogen, it was announced at Abu Dhabi Sustainability Week (ADSW) 2023.
The feasibility study will leverage the capabilities of the five partners to evaluate the technical and commercial viability of such a project. If the study’s conclusions are positive, the partners will target working toward developing the region’s first commercial-scale production capacity in Abu Dhabi.
Produced from sustainable feedstocks, such as municipal solid waste and renewable hydrogen, SAF has the potential to reduce lifecycle carbon emissions on average by up to 80 percent during its full lifecycle, compared to conventional jet fuel, according to the International Air Transport Association (IATA).
This collaboration is designed to strengthen the UAE’s leadership position in low-carbon energy and technology-driven industrial growth and will mark an important step in assessing the UAE’s potential to become a global leader in SAF production, a statement said.
Aviation is a key industry in the UAE, supporting over 13 percent of the national gross domestic product according to IATA economic data, and is set to continue to grow in the next decades. To support the UAE Net Zero by 2050 Strategic Initiative, that growth must be sustainable. SAF is currently the most viable proposition to help decarbonize the industry and has the potential to supply international markets. - TradeArabia News Service
Share