Chemical sector stood ground in 2020, is now bouncing back 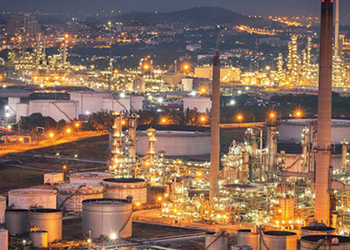 The recent years were challenging for Gulf chemical companies

By following the right strategies and learning from the past few months, GCC chemical producers will be able to adapt to the next normal and emerge from the crisis stronger than before, writes Nuriya Ismagilova, Research and Studies Specialist, GPCA

The impact of the Covid-19 pandemic has led to income deterioration, decreasing demand, and growth setbacks for the GCC chemical industry. The last 12 months were far from easy for Arabian Gulf producers, who were forced to operate at decreased production levels with severe shortage of manpower and unprecedented supply chain disruptions.

Despite facing significant supply chain disruptions, the GCC chemical industry stepped up efforts to safeguard the supply of raw materials for the manufacture of products used to enable the hygiene, testing and treatment of patients affected by coronavirus, alongside personal protective equipment for medical staff, as well as ensuring the continued manufacturing of essential food packaging material.

As reported by ACC, Mena petrochemicals output was stable up until May 2020. Production saw some decline during the summer months and has been bouncing back from August 2020 onwards.

• Revenue of GCC chemical producers: With prices for key petrochemicals falling to their lowest since the 2008 global financial crisis, the GCC chemical industry felt a significant impact on its revenue in 2020. Most regional chemical companies were hurt due to plunging prices and collapsing demand during the first two quarters of this year and started to only bounce back in Q3 but haven’t yet fully recovered.

In Q2, 2020 publicly listed companies in the GCC reported 20-35 per cent in revenue drop. The third quarter appears to be much better with revenue increasing by 33 per cent. This strength in growth in the third quarter is attributed to better demand in key value chains.

• Capital projects adjustments in the GCC: The collapse in oil and petrochemical prices together with dramatically changed market dynamics, have reduced the cash flows of major chemical producers in the GCC. This makes it more difficult for GCC chemical companies to move forward with their expansion plans. Some projects have already been announced to be delayed, while configurations are being reconsidered and even cancelled.

One of the major announcements was the reassessment of the flagship crude-to-chemicals (COTC) project in Saudi Arabia by Saudi Aramco and Sabic. However, the project is expected to happen with some changes in configuration, owing to the strong will in Saudi Arabia to increase the utilisation of crude oil in chemicals production.

Other mega projects in Saudi Arabia, namely Amiral and Phosphate 3 are still on track. The engineering work on Amiral is proceeding and we don’t expect this project to be impacted as it is instrumental for the development of an adjacent value park. Ma’aden is also in the process of exploring the possibility of building Phosphate 3 project, despite cash flow and revenue difficulties.

In Oman, DRPIC has suspended the Duqm Petrochemical Project as it is assessing the impact of Covid-19. While Duqm refinery is progressing as per the planned schedule, the fate of the petrochemical plant is unclear.

UAE’s Borouge 4 project remains on course and is still expected to come on stream in 2025. Given the strong position of Adnoc on its future expansion, especially within the petrochemicals sector, the project is expected to go ahead as planned.

The other two projects in the region worth highlighting are Al Zour Petrochemicals Complex in Kuwait and Ras Laffan Petrochemicals Project in Qatar. These two developments have a long and troubled history and were further impacted by the Covid-19 pandemic. For both projects final decisions were delayed and could be postponed once again in the future, resulting in further delays beyond 2025.

Despite the disruption it caused to the economy and society, the coronavirus pandemic has only accelerated the GCC’s circular economy efforts. Several projects, initiatives and commitments were made during 2020 in the GCC.

In Saudi Arabia, Sabic announced its Trucircle Initiative early in 2020 to help close the loop on plastic recycling. Similar developments took place in Kuwait with Equate starting production of a new food grade polyethylene terephthalate (PET), which uses 25 per cent of chemically recycled PET as feedstock.

In the UAE, Adnoc launched a carbon capture expansion programme. Also, in the UAE the Alliances for Global Sustainability and Veolia are planning to build a food-grade PET recycling facility in Kizad, Abu Dhabi.

GCC chemical companies have begun to invest in renewable technologies and projects, such as wind and solar as they look to transform towards cleaner energy sources.

In the GCC region, some of the largest companies, such as Sabic, Adnoc, and OQ have announced their renewable energy agenda.

Sabic announced its plans to install 4 GW of clean energy by 2025 and 13 GW by 2030 to provide electricity to its plants and sites in Saudi Arabia. The company also plans to transform its polycarbonate facility in Cartagena, Spain, to the world’s first large scale chemical production run entirely on renewable power.

Back home, the Kingdom’s top chemical producer plans to lead its operations in Yanbu by providing electricity generated by its Yanbu solar power plant. This is one of Sabic’s flagship projects with a capacity of 300 MW.

Chemical companies in the Arabian Gulf and globally had one of the most challenging years in recent history and the road to recovery may be difficult and long. At the same time, the economic and health crisis that shook the world in 2020 demonstrated more than ever before the importance of the chemical industry and its products, many of which are used to tackle the pandemic.

The Covid-19 pandemic only accelerated some of the major trends which were already a top priority on the chemical industry’s agenda, including circular economy, decarbonisation, sustainability, and consolidation. Throughout 2020 we saw a number of developments by GCC chemical producers to strengthen their ambitions on these fronts. By following the right strategies and learning from the past few months, companies will be able to adapt to the next normal and emerge from the crisis stronger than before.

* Established in 2006, the Gulf Petrochemicals and Chemicals Association (GPCA) represents the downstream hydrocarbon industry in the GCC. It has more than 250 member companies from the chemical and allied industries, accounting for over 95 per cent of chemical output in the Gulf region. The industry makes up the second largest manufacturing sector in the region, producing over $108 billion worth of products a year.

Chemical sector stood ground in 2020, is now bouncing back